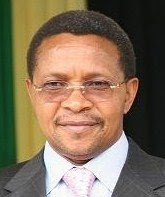 
(RUSUTSU, Japan) - A mild disturbance occurred at the G8 summit yesterday when Tanzania showed up at the G8 dinner dance uninvited. Tanzanian President Jakaya Kikwete told security personnel at the front door that he happened to be in the area, and thought hed drop in for a quick hello. He then entered the hall, and, after applying a sticker that read Hi, Im Tanzania to his lapel, took a seat between America and Great Britain.


Nice to meet you, Tarzan, said President Bush, before heading through the buffet line. We put out quite a spread at these things.


Speaking to reporters at the end of the evening, President Kikwete admitted he was disappointed with the chilly reception he received. A lot of countries kept dropping little hints to me that I wasnt welcome, he said. "Germany asked me point blank: 'Did you know this was specifically advertised as industrial nations only?' I was fumbling for an answer, so I blurted out that a lion ate the mailman who was delivering my invitation, but she didnt buy it. 'A lion ate your mailman?' she sneered, before walking away. That was not the worst of it. France and Russia kept walking by, and then burst out laughing. I watched them turn around, look back at me, and laugh again.


President Kikwete remained optimistic that one day he wouldnt have to sneak in to a G8 summit. All we need is one factory in my country, and Ill start the application process.

ahh ahh ahaaaa ahaa, jamani somebody help me, is this serious or jus a joke? lakini i cant stop myself from laughin, funny. lol!

I can't laugh at this. Umaskini wetu ndio umetuletea hii aibu...Hii habari imenitia hasira...raisi wetu was honest but these guys disrespected him. Why didn't any one inform his assistants to tell him he was not invited. How dare they ask our president 'Did you know this was specifically advertised as industrial nations only?'. If it was Bush making this kind of honest mistake would anyone dare to ask him that stupid question.

Walk Tall JK...we will get there one day. it's going to take more than one factory thou..!!!

I want to believe it is a joke! No?
K

We need more on this!!! Can you provide us the your source of your info please!!! Otherwise usimweke chini hivyo Rais wetu ingawa wote tunajuwa ni mchovu.

Can someone cut this and tell us it is a serious joke!
K

We need more on this!!! Can you provide us the your source of your info please!!! Otherwise usimweke chini hivyo Rais wetu ingawa wote tunajuwa ni mchovu.
Click to expand...

Lighten up patriots! if you follow the link by clicking the title of the article you will see some folks can still find the funny side of international relations. Enjoy.

This is from a US satirical blogger, (http://carbolicsmokeblog.blogspot.com/), but how did they get into TZ prez? Did anything close to the story happened?

No, man, its just a joke. They are making fun of the clubbishness of the G8 and the disparities in sovereign states: politically 'equal' in spite of glaring economic hierarchies. Where are Ze Comedy when you need them jamani, we need to laugh at politics again.