So long inamilikiwa Tz.
B 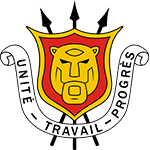 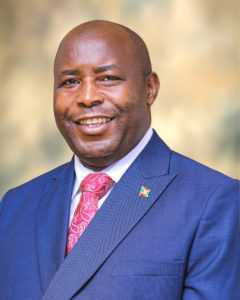 Major General Evariste Ndayishimiye aka N.Eva, is a Burundian politician, Secretary General of the CNDD-FDD party in power in Burundi since 2015. Born in 1968 in Musama, in Kabanga zone, Giheta commune in Gitega province (Central Burundi).

FIGHTING FOR PEACE
General Evariste Ndayishimiye is among the forerunners of the fight for peace and democracy of the FDD movement (Forces for the Defense of Democracy), a popular movement born after the decapitation of democracy with the assassination of the first democratically elected President in Burundi and all political leadership. He served as a mobilizer of the Movement in the provinces of Ngozi, Karusi, Gitega, Mwaro, Muyinga and Ruyigi in 1994, and that after the massacres of students at the University of Burundi (1995). The said massacres led to the massive enlistment of new officers in the ranks of the FDD. Ndayishimiye was at that time Captain and instructor of the FDD Combatants, he led the movement in the Ngozi, Karusi, Gitega, Ruyigi and Muyinga provinces.

MEDIATOR
In 1997, he participated in the mediation of the inhabitants of Bujumbura province and those who were on the front lines and won thanks to his talents of listening and intercession. Having ensured the command of the mobile commando units, he toured all the provinces of the country on foot which was an opportunity for him to familiarize himself with the life of the lower people with whom he shared life and death.

COMMUNICATOR
In 1997, General Evariste Ndayishimiye was commissioner in charge of policy, then spokesperson for the movement, after the dismissal of Léonard Nyangoma. A man of communications, he created the INTUMWA Journal in 1998. He designed the emblem of the CNDD-FDD Party, the eagle or INKONA in the national language Kirundi. He also coordinated the movement in the provinces of BURURI, MAKAMBA and RUTANA (southern Burundi).

POLITICIAN
Ndayishimiye headed the National Council of Patriots which carried out far-reaching reforms in the organization of the politico-military movement in 2001 and which subsequently organized the extraordinary congress which transformed the Movement into a Political Party in 2004.

NEGOTIATOR
He was at the head of the delegation of this Movement in the negotiations with the Transitional Government which led to the conclusion of the Comprehensive Ceasefire Agreement of November 16, 2003. He will later head the Joint Commission CMC ceasefire in the peace process. In his capacity as Minister of the Interior and Public Security, he will also head the government delegation in the ceasefire negotiations with the last PALIPEHUTU-FNL rebel movement led by Agathon Rwasa. The dialogue reached the Ceasefire Agreements dated September 6, 2006.

SENIOR STATE FRAMEWORK
Evariste Ndayishimiye has held several high political and military positions in the Republic. He was Chief of the General Staff of Logistics in the National Defense Force. He was also Minister of the Interior, Public Security and Communal Development and created the National Communal Investment Fund, FONIC in order to make the policy of decentralization and community development effective. A trusted man of President Pierre Nkurunziza, he held senior positions at the Presidency of the Republic as Chief of Staff in charge of military matters and later as Chief of the Civil Cabinet of the President of the Republic. In this capacity, he has on many occasions been emissary and special envoy of the President of the Republic to his counterparts in several African states such as Uganda, Tanzania, Kenya, Mali, Somalia, Nigeria, Namibia, Ethiopia, South Africa, Zimbabwe as well as in various forums and summits such as at the African Union, or at the ECOWAS summit- ECCAS. He was also the Managing Director of the Burundian Company for Warehouse Management and Stopover Aircraft Assistance (SOBUGEA).

PARTY LEADER
General Evariste Ndayishimiye succeeded the head of the CNDD-FDD Party from the Honorable Pascal Nyabenda, President of the National Assembly. This General had started by presenting his letter of resignation to the army, and after the acceptance by the Head of State HE Pierre Nkurunziza by Decree No 100/157 of August 18, 2016.

SPORTS AND SOCIAL MANAGER
Besides these various positions listed above, Major General Ndayishimiye held other responsibilities of a social nature: He was, from 2005 until 2008, vice-president of the National Olympic Committee. From 2008 until 2017, he became chairman of the said Committee and he is today its honorary chairman.
Evariste Ndayishimiye is also a founding member of the Polytechnic University of Gitega, of which he is today Chairman of the Board of Directors.

MAN OF LAW AND LEADERSHIP
Evariste Ndayishimiye studied Law and has exceptional qualities of leadership, mobilization, listening, compassion, and humanity. He is a devout Catholic Christian, married to Madame Angeline Ndayubaha and together have six children including two boys. Evariste Ndayishimiye speaks and writes four languages Kirundi, French, English and Kiswahili

14 May 2015 — Nkurunziza was in Tanzania when a former military chief announc… ... Pierre Nkurunziza has returned home a day after an attempted coup, ...

Hamna kitu hapo
You must log in or register to reply here.