How long before it's okay to stone your wife to death for talking to another man so long as you married her in a country that allows it? 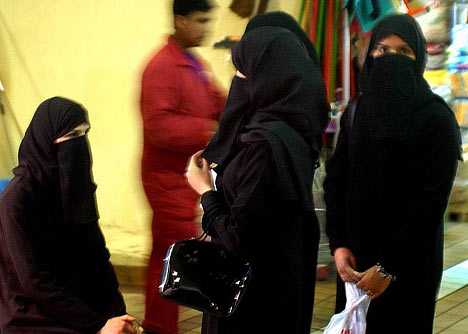 Husbands living in a "harem" with multiple wives have been cleared to claim state benefits for all their different partners.

A Muslim man with four spouses - which is permitted under Islamic law - could receive &#163;10,000 a year in income support alone.

He could also be entitled to more generous housing and council tax benefit, to reflect the fact his household needs a bigger property.

Ministers have decided that, even though bigamy is a crime in Britain, polygamous marriages can be recognised formally by the state - provided they took place overseas, in countries where they are legal.

The outcome will chiefly benefit Muslim men with more than one wife.

Ministers estimate that up to a thousand polygamous partnerships exist in Britain, although they admit there is no exact record.

Potentially, the benefits bill for income support could reach &#163;10m.

New guidelines on income support from the Department for Work and Pensions (DWP) state: "Where there is a valid polygamous marriage the claimant and one spouse will be paid the couple rate (&#163;92.80).

Income support for all of the wives may be paid directly into the husband's bank account, if the family so choose.

Chris Grayling, the shadow work and pensions secretary, said that the decision was "completely unjustifiable".

He added: "You are not allowed to have multiple marriages in the UK, so to have a situation where the benefits system is treating people in different ways is totally unacceptable and will serve to undermine confidence in the system.

"This sets a precedent that will lead to more demands for the culture of other countries to be reflected in UK law and the benefits system."

Mr Grayling also accused the Government of trying to keep the ruling quiet because the topic is so controversial.

Corin Taylor, research director for the Taxpayers' Alliance, said: "British taxpayers are paying a record amount of tax so the Government has a duty to make sure that every penny is spent properly.

"Polygamy is not something which British law allows and therefore British taxpayers should not have to pay for extra benefits for second or third wives.

"If other countries sanction polygamy that is fine but the British taxpayer should not have to fund it."

Ministers launched a review of the benefit rules for polygamous marriages in November 2006, after it emerged that some families had benefited financially.

The review concluded in December last year with agreement that the extra benefits should continue to be paid. But the decision was not publicly announced.

Four departments - the Treasury, the DWP, HM Revenue and Customs, and the Home Office - were involved in the review, which concluded that recognising multiple marriages conducted overseas was 'the best possible' option. In Britain, bigamy is punishable by up to seven years in prison.

Islamic law permits men to have up to four wives at any one time - known as a harem - provided the husband spends equal amounts of time and money on each of them.

The DWP believes the number of people in polygamous marriages entering Britain has fallen since the 1988 Immigration Act, which makes it harder to bring more than one wife to the UK.

But, while a married man cannot obtain a spouse visa to bring a second wife into Britain, some multiple partners may be able to enter the country via other legal routes such as tourist visas, student visas or work permits.

Officials have also identified a potential loophole by which a man can divorce his wife under British law while continuing to live with her as his spouse under Islamic law, and obtain a spouse visa for a foreign woman who he can legally marry.

Immigration rules say entry clearance may not be withheld from a second wife where the husband has divorced his previous wife, and the divorce is thought to be one of convenience.

This is so, even if the husband is still living with the previous wife and to issue the entry clearance would lead to the formation of a polygamous household.

Muslim couples are only married in the eyes of the British state if they undergo a register office wedding as well as a Nikah, or religious ceremony.

Muslim groups say it is quite common for men here to undergo more than one Nikah with different wives. This does not count as bigamy since only the first marriage is legally recognised.

A DWP spokesman said: 'There are fewer than 1,000 polygamous marriages in the UK and only a small percentage of these are claiming social security benefit.

"We recently reviewed the rules regarding benefit payments to customers in a polygamous marriage, which conclude that the rules in place since 1987 provide the necessary safeguards to ensure there is no financial advantage for claimants in a valid polygamous marriage."
Click to expand...


One in five babies is born to a woman from outside the UK - an increase of 10 per cent in just one year.

But there was also a large rise in births to women in their late 30s and 40s, as more continued to delay motherhood in favour of a career.

The figures, from the Government's Office for National Statistics, reveal the average number of children per woman in England and Wales has risen to 1.87 - the highest rate since 1980.

In the last four years, about 600,000 Eastern European immigrants have arrived in the UK from the eight nations which joined the EU in 2004.

They include Poland, which joined the Union in 2004, and Romania and Bulgaria, which were added this year.

There have also been big increases in the numbers of babies born to women from Pakistan, India, Africa and the Middle East.

Since Labour came to power in 1997, about 1.5million immigrants have moved to the UK, official figures suggest. There are no statisticsfor those who are here illegally.


The highest birth rates in any one area were recorded in Newham in East London, an area with a high migrant population and a non-white majority.

In Newham, each woman has an average of 2.56 children.

The lowest fertility rates were found in the North East, where each woman typically has 1.78 children..

"Immigrant groups have higher birth rates than the existing population.'

Now I have another reason to move my base to somewhere near Leincester...
M


One in five babies is born to a woman from outside the UK - an increase of 10 per cent in just one year.
Click to expand...

Ubaguzi ni ule ule whether umeelekezwa kwa mzungu au mweusi.
You must log in or register to reply here.