finally they can give this cat the time of day, he's been bitching for


LOS ANGELES - Universal Music Group said on Monday that Shawn Jay-Z Carter is stepping down as president of its Def Jam Records unit, effective by the end of the year.

Carter, who was named president of the storied rap label three years ago, said it was time for him to take on new challenges. He signed acts including R&B singers Rihanna and Ne-Yo.

Universal said Jay-Z, also a top-selling rap artist, will continue as a recording artist for its Roc-A-Fella/Def Jam label.

CHUCK D wants DEF JAM presidency​
After 10 years looking on the collapsing of the record industry, and upon hearing the news of Jay-Z stepping down from Def Jam, I would throw my name into the hat of somebody who understands how the hell Universal should establish the name-brands they acquire with stockholders money," Chuck D told AllHipHop.com.

Chuck D, real name Carlton Douglas Ridenhour, recorded under the Def Jam banner from 1987 to 1998 and churned out some of the label's biggest hits as the lead rapper of Public Enemy.

The rapper has always been a proponent of the internet and launched Rapstation.com in 1999 to offer readers free MP3 downloads and even downloadable ringtones, among other progressive elements.


Chuck D, who also runs his own Slam Jamz label, said that running Def Jam is a more viable option than tossing his hat into the political arena. 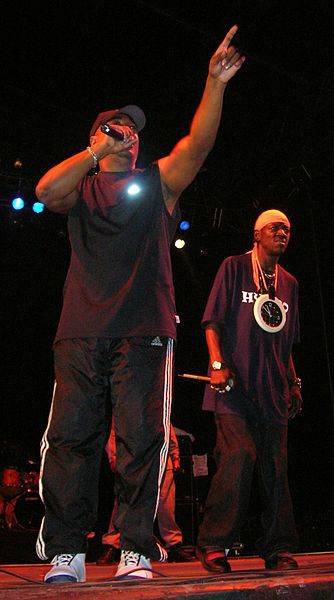 "So instead of me running for politics, this is an easier run into the world of influential culture," he continued. "I'm in Los Angeles, Atlanta and New York on the regular as well as I [thoroughly understand] the international picture," Chuck said. "There would be some seismic changes, and I would be a little Huey Long-ish at it. If folks are clueless about this parallel that's precisely the problem." [Editor's note: Huey P. Long was a Great Depression-era politician that was hugely popular and successful. He was killed shortly after announcing a bid for the presidency.]

Chuck D also said that Jay-Z didn't quite have time to grow as the CEO, but cited what has been speculated that he'll be with Def Jam co-founder Rick Rubin at Sony Records.

"I think a person like Jay-Z needed a bit more time, but I could imagine his corporate limitations, and he's gonna be working alongside a true music cat R.R. [Rick Rubin] to do his thing."

The music business' chief concern these days is monetary return and Chuck D, who is renowned for his political and social consciousness, said he could generate revenue as well.

"I'd show them how to make a profit, if they care. I will bring the noise. It will be interesting to hear the requirements here [for the job]," he concluded.


Chuck D outlined his plan for Def Jam, as seen below:


1) Being ahead of the technology curve; preparing for a thinned out industry; and managing budget efficient acts is very noteworthy of my resume which is simple. I told these cats the online revolution was coming and they needed big adjustments. They relied on lawyers, courts, and accountants only to now look upward at Apple, etc.

2) Their cost factors didn't fit the times, I come from a world where the $50,000 investments resulted into 6 - 7 figures. Now it's a business where 7 figures are invested to make 6.

3) I would run it like sports. These artists would be busting their tails on tour and on the stage to gain a fan. They would be coached on how to do their thing right. Braintrust will be high, and subcontracting to the right contributors will be comparable of the efficiency of these labels like Jazz and catalog departments. You cannot have people working, that haven't the slightest clue of what they are in the middle of.

4) Any criminal mindedness in artistry, and management would have sit this one out, go their own way. It's like bad apples the long run ain't got nothing to do with entertainment. You can't mix the stage and off stage parodies.
C