Police Commissioner Mathew Iteere says the threats by Alshabaab cannot be taken for granted considering they issued a similar warning to Uganda before bomb attacks that killed more than 70 people in July last year for which they claimed responsibility.

Addressing journalists in Nairobi on Monday Iteere said security has been beefed up on the Kenyan borders to avert entry of any illegal groups.

However, Iteere urged Kenyans not to panic and assured them that security personnel are on high alert. Ha called on the public to cooperate with security agents in case they encounter any suspicious individuals or groups.

The police boss also said calm has returned to the border town of Mandera following a week-long fighting on the Somalia side between Al -Shabaab militia, troops allied to the Somali transitional Government and Ethiopian troops.

During the fighting, one person was killed by stray bullets fired from Somalia and ten others injured.

The Al Shabaab have threatened to launch an attack against Kenya for assisting the Somali Transitional government by allegedly allowing Ethiopian forces to stage raids from its territory.

Following heavy fighting between Al-Shabab militants and forces allied to the Transitional Federal Government of Somalia, along the Kenya-Somalia border, hundreds of refugees are scattered in Mandera town and its environs.

A lull in the fighting on Sunday enabled the KRCS personnel to start registration of refugees that would facilitate distribution of relief aid.

A team comprising the Provincial Administration, KRCS and medical officers has identified a site for a temporary refugee camp. KRCS has also deployed to Mandera relief items for 1000 households (6,000 people.

A woman was killed at Border Point One and 10 casualties treated at Mandera District Hospital.

At least 17 people who sustained injuries following the conflict have been treated in various health facilities in the district.

Al-shabab spokesman: The Somalis in Kenya should be ready for fighting


MOGADISHU  The spokesman of Al-shabab fighters Sheik Ali Mohamud Raghe (Sheik Ali Dere), has Sunday accused the Kenyan government for involving the clashes continuing in Somalia warning Kenya for not to play role in the war going on in the country.

Kenya will take all responsibilities of the clashes in Somalia if it did not stop intervening Somalia. If it does not halt taking part the fighting in the country. We know that Kenya is part of the clashes continuing in some of the regions in Somalia mainly Jubba regions and Gedo, said Sheik Ali Dhere.

The spokesman has held press conference in the Somali capital Mogadishu and told reporters that Kenyan government provided military training to the transitional government soldiers of Somalia and also organized the confrontations that often happen in the regions bordering Kenya that are under the control of Al-shabab in southern Somalia.

The spokesman called for the Somali people in Kenya to be ready for fighting against the Kenyan government asserting that Kenya became reluctant to be out of creating clashes in Somali pointing out they would attack Kenyans to response the latest fighting in Belet-hawo town of Gedo region in southern Somalia.

The statement comes as there had been fighting between the transitional government of Somalia with Ahlu Sunna Waljamaa and Al-shabab forces that caused large displacement. 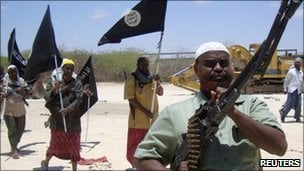 Al-Shabab has recently been pushed out of some parts of Mogadishu
Kenyan forces have crossed into Somali territory to fight al-Shabab militants, an official source has told the BBC.
However, the reports were denied by a police spokesman.
Twelve militants were killed in the raid near the border town of Liboi, Kenya's Standard newspaper reports.
Kenya supports the Somali government and has helped trained its forces but if confirmed, this would be the first time Kenyan officers have crossed the border.
The raid was carried out by the police General Service Unit in the wake of recent militant attacks on the Kenyan side of the border, the Standard says.
Al-Shabab has previously threatened to stage attacks in Kenya but none have been carried out.

Last year, al-Shabab said it was behind a double attack on the Ugandan capital, Kampala, which killed at least 76 people, in revenge for Uganda sending troops to help the Somali government.
Al-Shabab, which has links to al-Qaeda, controls much of southern and central Somalia.
The government, backed by some 9,000 African Union troops from Uganda and Burundi, has this year gained some ground in the capital, Mogadishu.
Somalia has been wracked by constant war for more than 20 years - its last functioning national government was toppled in 1991.
J

It is about time! Bravo, Kenya.

Oil or not, some authority needs to help instill discipline and a governable Somalia

pmwasyoke said:
Oil or not, some authority needs to help instill discipline and a governable Somalia
Click to expand...


I agree with you. So why is it ok for Somaliland but when it comes to Libya everyone goes ballistic?

Kenya you have my silent nod of approval.

Kenyans vnever gonna make it!! al-shabaab are too much.

Ivuga said:
Kenyans vnever gonna make it!! al-shabaab are too much.
Click to expand...

Edward Teller said:
Dont underestimate Kenyan-they are better than us-and they can make it-
Click to expand...

hahahah!! those soldiers from mombasa?

RAJ PATEL JR said:
I agree with you. So why is it ok for Somaliland but when it comes to Libya everyone goes ballistic?
Click to expand...


I guess the difference is that in Libya there was a Government. A change of the functional, dictatorial Government in Libya is the right of Libyans themselves.

I'm afraid next Friday there will be mass demonstrations in Dar to condemn Kenya for invading Somalia.
M

RAJ PATEL JR said:
I'm afraid next Friday there will be mass demonstrations in Dar to condemn Kenya for invading Somalia.
Click to expand...