Samahani I couldnt wait to check if someone has already posted this article. Yaani kama ya Igunga; the opposite is true: kuku wamekufa mtu kapona

[h=1]Amazing escape for mother and daughter after lorry carrying 3,000 chickens flips over and crushes their car (but the hens werent so lucky)[/h] By Daily Mail Reporter


With a car squashed to almost half its size under a toppled lorry, this looks like an accident no one could survive.
But when police arrived, they found the Peugeot driver and her mother not only alive but with barely a scratch between them.
Somehow the pair had managed to lie as flat as possible and fit themselves into the tiny space left after the 32-ton lorry crushed their car. 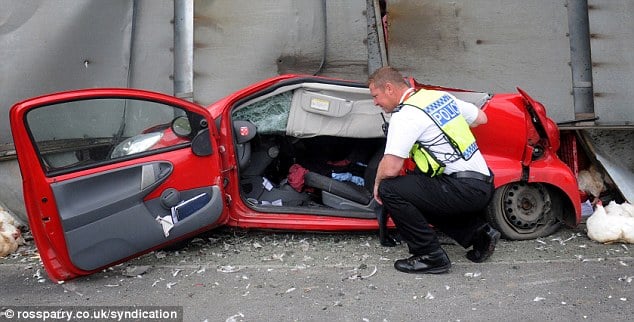 The great escape: A policeman marvels at the wrecked Peugeot 107

The daughter had been driving on the inside lane when she noticed the lorry, carrying a load of 3,000 chickens, start to wobble.
She grabbed her mother and pulled her down just as the vehicle hit them. They were inside, curled up together, when the emergency services arrived. Traffic sergeant Andy Quigley was one of the first on the scene at the A64 in York on Monday.
He described it as the most incredible escape he had seen in 16 years as a traffic policeman. 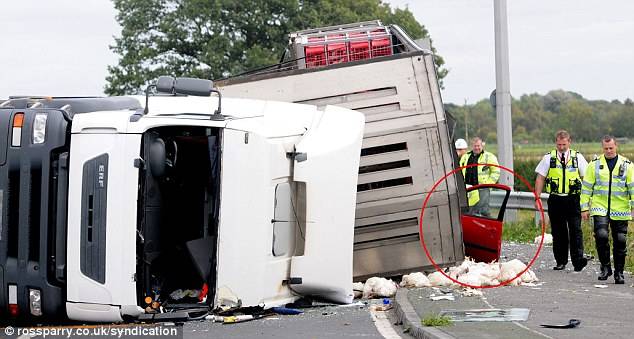 Flattened: Only the car door is visible under the toppled lorry, which has lost its cargo of chickens

They are very lucky indeed, he said. When we got the call that a lorry had overturned on a car, we fully anticipated we would be dealing with a fatal accident.
Both women and the driver of the lorry were taken to hospital where they were treated for cuts, bruises and shock.
These incredible pictures show the red Peugeot 107 almost completely flattened and police on the scene were astounded that no one was killed. 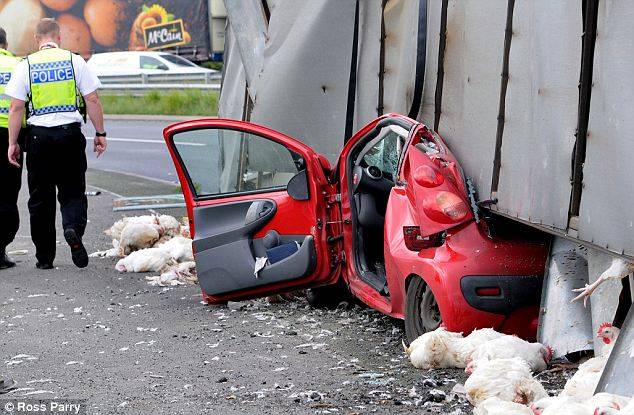 Amazing escape: The car was left almost completely crushed by the chicken lorry, and yet the driver and passenger survived with only cuts and bruises


The car was on the inside lane when the lorry toppled sideways on to it.
The daughter saw it turning over and lay across to her mother. The lorry crushed the car to about two and a half feet above the ground, leaving the pair in a small space on the seats.
He said the cause of the accident was under investigation, although there is no suggestion of foul play.
The mum, daughter and lorry driver were taken to nearby York District Hospital to be checked over.
Efforts to clear the scene of wreckage were hampered because the lorry was carrying thousands of chickens, some of which lay dead and dying on the road and verge, and in cages still on the vehicle.
RSPCA officers were called to assist in dealing with the birds.
It is not known why the lorry toppled over.

Police are investigating the cause of the accident. 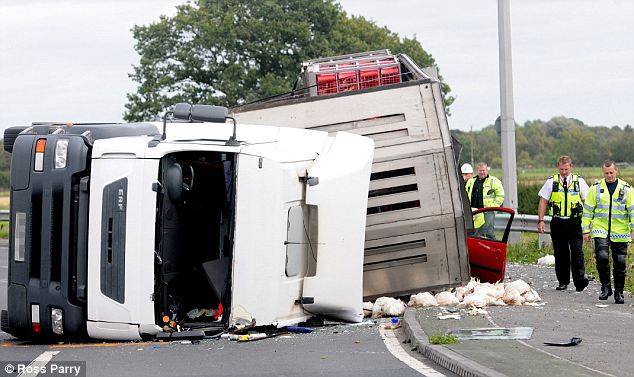 Was this happened in Igunga or Somalia, please notify us.

Magamba wameishiwa mbinu
You must log in or register to reply here.