American singer Kelis has launched into an angry Twitter tirade against Britain after she was allegedly subjected to racial abuse in a London airport.
The 32-year-old was waiting at passport control at one of the capital's airports when she was apparently labelled a 'slave' by a middle-aged white man.
She had been travelling home to America with her two-year-old son Knight after performing at Bestival on the Isle Of Wight over the weekend. 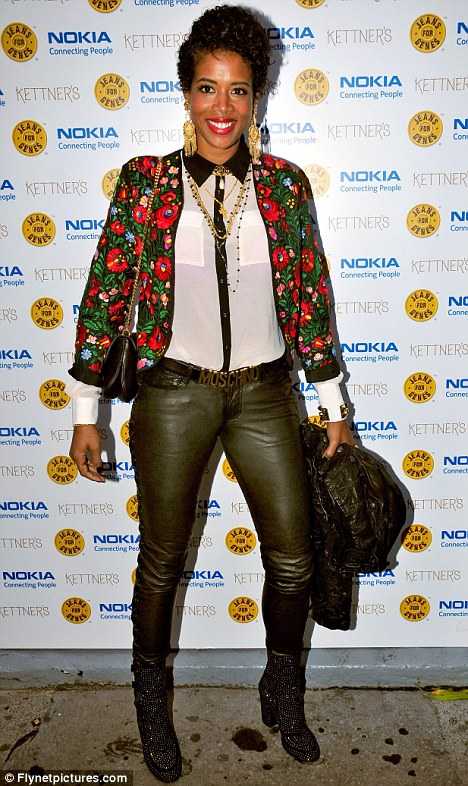 Twitter fury: A happier Kelis enjoyed a night out in London at the Jeans For Genes party last week

The incident took place when Kelis was accused of queue-jumping by a 'red-faced sweaty man (I use the word man loosely here)'.
She went on to say he then called her 'slave' and declared she was 'probably a disgusting Nigerian'.
The R&B singer explained: 'He called me kunta kinte and ranted and raved some more.
'The man behind the passport desk laughed, shook his head in agreement I guess, and said "kunta kinte". 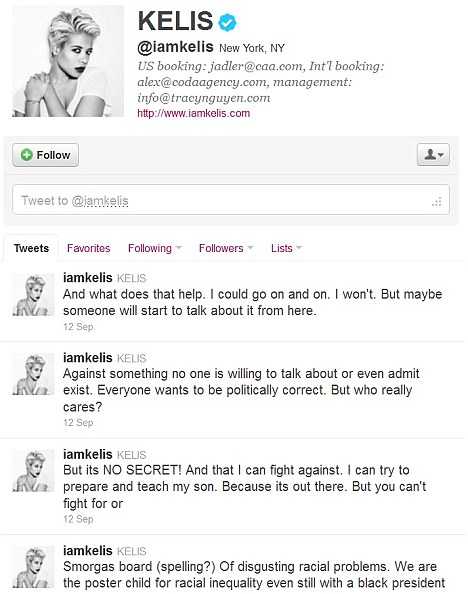 Tricky issue: Kelis took to her Twitter page on Monday after she was allegedly subjected to racist abuse at a London airport

'All the while the entire line full of people I just sat on a plane with for almost 3hours, over 50 people said nothing. I mean literally nothing. Didn't flinch.
'We all no (sic) I'm no saint, so I retaliated. Not the way I wanted to or how that pig deserved. But #1 my gorgeous baby boy was literally sitting on my hip and #2 I'm a believer. And we are better. Supposed to be.
Kelis then brought up the London riots in August - which were committed by British people from a range of races, classes and ages.
Obviously upset, the Milkshake singer declared the incident had made her believe the UK was 'decades behind progression'. 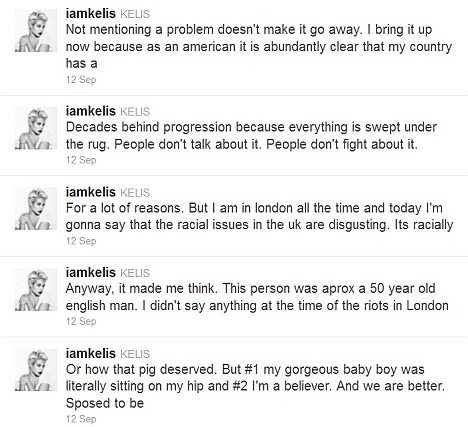 Hitting out: The R&B singer accused the UK of being 'decades behind in progression'

She continued: 'I didn't say anything at the time of the riots in London for a lot of reasons. But I am in London all the time and today I'm gonna say that the racial issues in the UK are disgusting.
'Its racially decades behind progression because everything is swept under the rug. People don't talk about it. People don't fight about it. Not mentioning a problem doesn't make it go away.'
After many fans pointed out America's on-going racial tensions - which were most recently highlighted during the aftermath of Hurricane Katrina, Kelis acknowledged her home country also had issues.
She added: 'I bring it up now because as an American it is abundantly clear that my country has a Smorgasbord of disgusting racial problems. 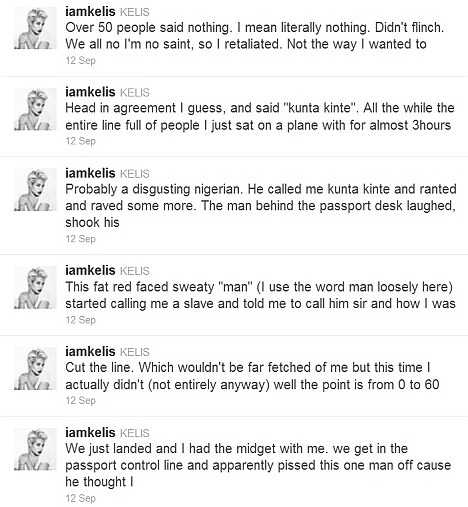 'We are the poster child for racial inequality even still with a black president. But its NO SECRET! And that I can fight against. I can try to prepare and teach my son. Because its out there. But you can't fight for or against something no one is willing to talk about or even admit exist.'

Anti-racism groups were keen to point out that while racism still exists in some pockets of society, the man's alleged behaviour was not representational of British people.
A spokesman for the Runnymede Trust, the U.K.s leading independent race equality group, told WENN.com: 'Its worth noting that were not a multi-racial paradise in the U.K. but there is a fight back here, and there are lots of ways in which musicians like Kelis can contribute to that. Things like the UpRise music festival in London  10,000 people making it clear they are against racism.
'But I dont think we have got a huge amount to learn from America in terms of the racism that operates over there. We are struggling against racism in the same way as people are in the States.'