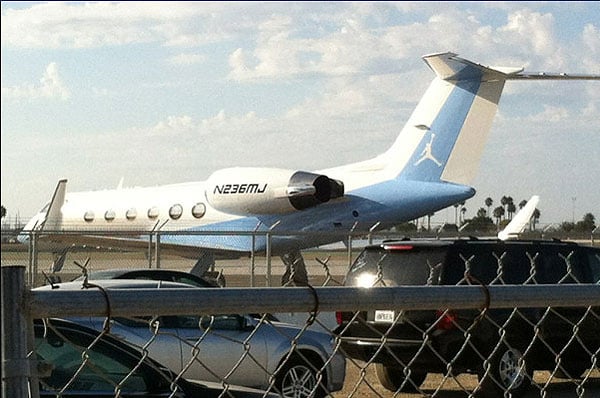 Michael Jordan is amongst the most vocal of NBA owners when it's come to initiating a better revenue-sharing system, as his Charlotte Bobcats struggle to compete financially with the Los Angeles Lakers andNew York Knicks. In terms of stylish, personalized air travel, though, it's safe to say that MJ has just about every owner beat. Even you, Mark Cuban.
This, via Yardbarker, is the guy's plane. It features a North Carolina-blue tail fin, the "6" and the "23" in its tail number refer to the amount of NBA championships he won and Jordan's number, and it has his own logo on it. Just in case MJ gets confused on the tarmac:

Perhaps those familiar with the wonderful world of aviation (especially as "PanAm Fever" grips the country) can help us identify the type of plane it is in the comments section. All we can tell is that having your initials worked into the plane's identification (as you can see by the "N236MJ" on the plane's left jet engine) is pretty dope.