A COMPANY owned by the family of the chairman of the ruling Chama Cha Mapinduzi (CCM) in Mbeya Region, Nawab Mulla, is at the centre of allegations of poaching and involvement in the illegal trade of game trophies in the country, it has been learnt.

According to police reports, a cargo of illegal government trophies was recently discovered in Iringa Region inside a truck allegedly associated with Usangu Safaris Limited, a tourist hunting company owned by the prominent Mulla family.

Nyombi confirmed that the vehicle was found carrying various game trophies including elephant ivory, rhinoceros horns, and the hides of various wild animals.

Police have so far arrested the owner of the vehicle, Evarist Ngina; the driver, Stanley Gohaji; and the Usangu Safaris Ltd Operations Manager, Solomon Makuru. The three were arrested at a police checkpoint in the Igumbila area, while allegedly trying to transport the illegal game trophies from Mbarali District in Mbeya Region to Dar es Salaam.

Nyombi said police have launched an official investigation into the matter, and are still trying to verify the owners of the Usangu Safaris company.

According to official records at the Ministry of Natural Resources and Tourism, the listed directors of Usangu Safaris Ltd are H. Mulla Abdulrahim and Abdul Basid H. Mulla.

RPC Nyoni said the game trophies seized from the truck by police did not have the necessary permits from the government.

He said police are also trying to verify the authenticity of various documents presented by the Usangu company employee, Makuru, who is said to have claimed that his employers had received orders from foreign companies to export the trophies to Europe.

When contacted by phone yesterday for comment about the incident, Nawab Mulla declined to discuss the alleged involvement of his familys company in the trophies catch.

Why are you asking me these stupid questions? ... Arent you tired of making enemies? You have already targeted EPA, Richmond, radar and others. Now you are trying to create more enemies, the Mbeya CCM regional chairman charged.

He ended the telephone conversation with our reporter by saying he had better things to do than respond to such questions.

But another member of the Mulla family, Nazir Mulla, told THISDAY in another telephone interview from Mbeya Region that Usangu company was not involved in any illegal game trophies business.

My company is not involved in criminal activities&#65533;we have all the documents for the trophies, he stated.

Nazir said he had no knowledge of reports that investigators last week searched the companys offices in Dar es Salaam over the Iringa incident.

He dismissed allegations that the company was trying to cover up the arrest of its employee with suspected illegal game trophies.

The Permanent Secretary in the Ministry of Natural Resources and Tourism, Ms Blandina Nyoni, said she was not immediately aware of the arrest of the suspects in connection with the illegal trophies, as she had just returned to Dar es Salaam from the Sullivan Summit in Arusha.
T 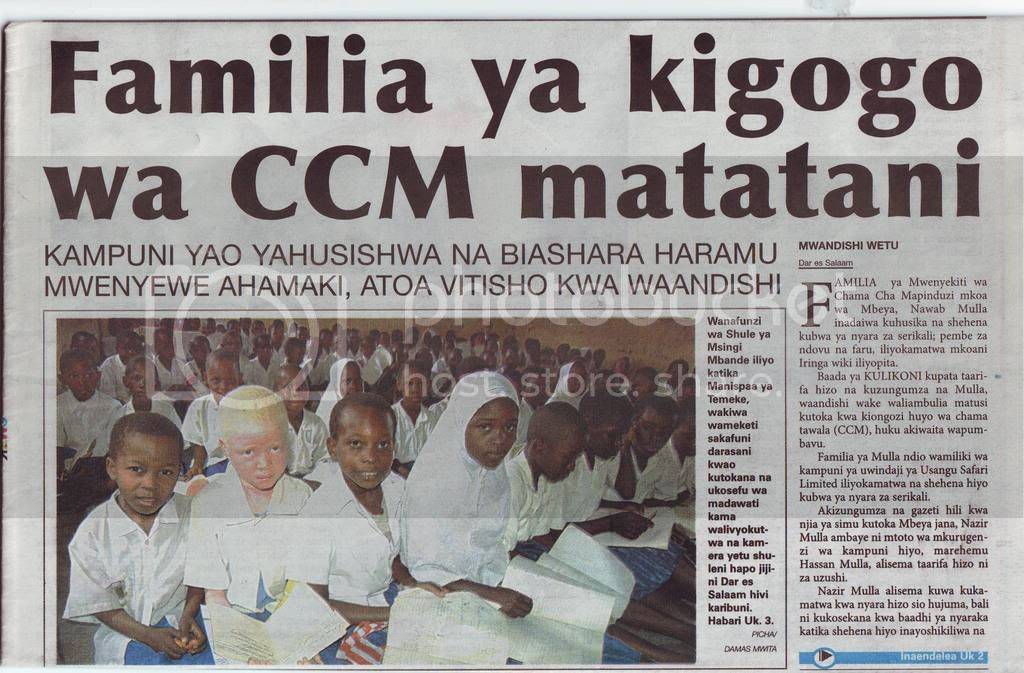 Power to the People

I can smell a very big rotten RAT.

Yes this is tanzania!!

Wakati tukikaribia kuitangazia dunia, What is Tanzania: The Royal Tour?
2 3