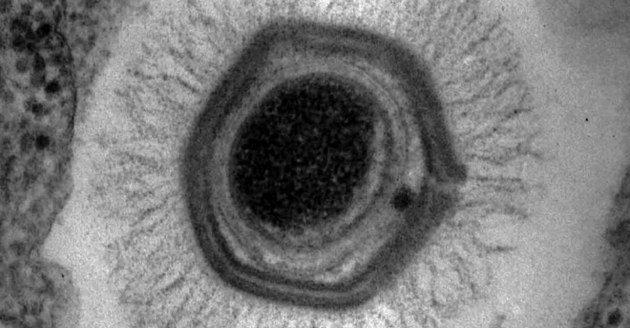 Megavirus nudges out Mimivirus, the former heavyweight champion of the viral world

Billionaire adventurer Richard Branson may have large-scale plans for deep sea exploration, but a new ocean discovery makes big waves on a microscopic level. A team of researchers trawling the ocean floor have just published their findings of the world's new largest virus, found lurking off the coast of Las Cruces, Chile. It's so big, it's actual scientific name is Megavirus chilensis  and you can even view it with a basic light microscope. The previous virus record holder was Mimivirus, which boasted the largest diameter of any virus to date until Megavirus came along.
The virus' DNA features 1,259,197 base pairs, which encode some parasitic bacteria-like features. Unlike a virus, bacteria is a cellular organism  a virus can only infect and replicate itself within the cells of other organisms. It even has some built-in DNA repairing enzymes which allow the virus to repair damage from ultraviolet light, chemicals, and radiation.
Mimivirus was found in 1992, lurking in an amoeba in Bradford, England. Its capsid, the protein shell housing the virus' genetic material, was 400 nanometres wide. If that still sounds pretty tiny, most viruses fall in the range between 20 and 300 nanometres, making both Mimivirus and the new Megavirus titans of the microscopic world. Mimivirus and Megavirus are believed to have diverged from a shared viral ancestor somewhere along the evolutionary road, both developing into giant viruses in their own right.
PNAS via PopSci, BBC
This article originally appeared on Tecca
You must log in or register to reply here.