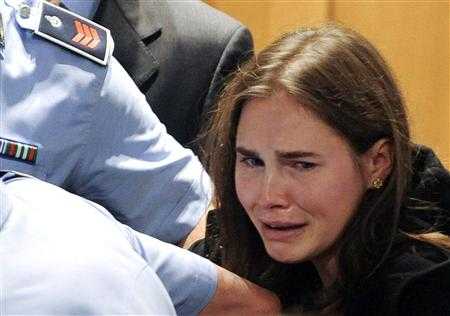 The murder of Meredith Kercher occurred inPerugia, Italy, on 1 November 2007. Kercher, aged 21 at the time of her death, was a British university exchange student from Coulsdon, South London. She shared a flat with three other young women. She was sexually assaulted and stabbed repeatedly, and some of her property was stolen.

Rudy Guede, a resident of Perugia, was convicted on 28 October 2008 of the sexual assault and murder of Kercher. His fast-track conviction was upheld, and he is now serving a sentence of 16 years, reduced after he incriminated Raffaele Sollecito, an Italian student, and Amanda Knox, an American. Knox was also an exchange student and a flatmate of Kercher. Knox and Sollecito were convicted of sexual assault and murder in December 2009. They were given sentences of 26 and 25 years respectively. Knox and Sollecito appealed the verdict and on 3 October 2011 the Italian appeals court reversed their convictions.

The trials have been the subject of news reports around the world, particularly in Italy, Britain and the United States. The coverage has been criticised for being tabloid in nature rather than presenting the evidence accurately and dispassionately.

Reactions to the case have been polarized between the view that Knox and Sollecito were innocent victims of a miscarriage of justice and the view that they were directly involved in Kercher's murder and convicted fairly.

Factors that helped Amanda in the Appeal:

1. Reasonable doubt Amanda Knox's lawyers managed to instil reasonable doubt in the jurors' minds over the quality of testing of the bra clasp belonging to Meredith Kercher - which it was claimed had Raffaele Sollecito's DNA on it - and the knife that prosecutors argued was the murder weapon. The prosecution maintained Knox's DNA was on the handle of the kitchen knife, with Ms Kercher's DNA on the blade. The defence claimed that the amount of Meredith Kercher's DNA on the blade was too small to test. An independent review disputed the prosecution's claims.

2. Crime scene errors A few police crime scene errors, such as contaminated samples, lost evidence and disputed procedures, were successfully portrayed as generalised incompetence. An independent review raised doubt over the attribution of some of the DNA traces, which were collected from the crime scene 46 days after the murder.

3. Lack of proof There was no convincing proof that Amanda Knox and Raffaele Sollecito were actually in the room when Meredith Kercher died. Even the presence of Amanda Knox's blood and footprints in the house were successfully explained away. Her defence claimed that Knox's blood could have been there because she was a resident at the farm house on Pergola Road. The evidence of Rudy Guede against Knox was also confusing. Guede, who is serving a prison sentence for sexual assault and murder, said that he heard her voice at the scene but didn't see her face.

4. Motive There was no credible motive for the murder. The prosecution stuck doggedly to the sex-game-gone-wrong explanation even though their own medical examiner said there was no evidence of rape in the days following the murder. An alternative motive, involving robbery, gained traction as the case rolled on, based on the unexplained disappearance of Meredith Kercher's 200 euro rent money.

5. Unreliable witness One of the key witnesses at the original trial, a homeless man called Antonio Curatolo, publicly admitted to being a heroin addict, undermining his observations that he saw Knox acting suspiciously by the scene of the crime on the night of the murder in November 2007.

6. Character Knox claimed that some of the evidence put forward against her - stories about her strange behaviour after she was arrested and the prosecution's focus on her sexuality - was no more than an attempt to demonise her to cover up for a weak case.

7. PR campaign Knox's family hired a Seattle public relations specialist, David Marriot, who for months repeatedly plugged the line: "Amanda will get out, it's a done deal." This created a self-propagating media frenzy, which - in the end - helped convince a largely sceptical Italian media.

8. Supporters' presence The massive presence of friends and family in Perugia in support fuelled the "Amanda is innocent" campaign. Italians have claimed that because Knox is American, the case has been handled differently, so as not to offend the US.

9. Appeals process The Italian appeals process offers more guarantees to defendants than any other legal system in the world, whereby only the weakest evidence is treated, not the whole case. Knox's team only had to attack the DNA evidence against her to undermine the whole edifice of the original trial. Italy has one of lowest prison populations in the world because of its lenient appeals process.

Ngambo Ngali said:
Appeals process The Italian appeals process offers more guarantees to defendants than any other legal system in the world, whereby only the weakest evidence is treated, not the whole case. Knox's team only had to attack the DNA evidence against her to undermine the whole edifice of the original trial. Italy has one of lowest prison populations in the world because of its lenient appeals process.
Click to expand...

Angalizo: BE siyo mwanasheria!
You must log in or register to reply here.