Consequently, only Chief Justice David Maraga turned up for the October 25 hearing.Without a minimum quorum of five judges, Maraga said the court could not make a ruling on the petition, paving the way for the election re-run to go ahead.The government said the bodyguard’s shooting was a robbery rather than an attempt to intimidate the judges.

[https://www]By REUTERS
More by this Author

The Kenyan government has denied a request by Supreme Court judges for extra security after one of their bodyguards was shot, preventing them from holding a hearing that could have delayed last week’s presidential election, a senior judicial source said on Tuesday.

The court has been centre stage since it annulled an August 8 vote won by President Uhuru Kenyatta, citing procedural irregularities and ordering a repeat vote within 60 days.

The decision was the first of its kind in Africa, where governments often hold sway over judges. It angered some of Kenyatta’s supporters, who said the judges had thwarted the will of the people.

Kenyatta won 98 per cent of the vote in the October 26 re-run after opposition leader Raila Odinga boycotted it on the grounds it would not be fair because the election board had failed to implement reforms he sought after the court decision.

The Supreme Court had been due to meet on October 25 to deliberate on an eleventh-hour request to delay the re-run. But the day before, the bodyguard of its deputy chief justice was shot as he bought pot plants beside a highway.

Only Chief Justice David Maraga turned up for the October 25 hearing. Without a minimum quorum of five judges, Maraga said the court could not make a ruling on the petition, paving the way for the election re-run to go ahead.

Asked about the request by the judges, Interior ministry spokesman Mwenda Njoka said security for all judges was enhanced in the wake of the shooting.

“If anybody is telling you to the contrary, they are not telling the truth,” he told Reuters.

The government said the bodyguard’s shooting was a robbery rather than an attempt to intimidate the judges, whom Kenyatta had branded as “crooks” after they voided the August election.

Treating the shooting as a regular crime angered the judges, who demanded they get extra security, the judicial source said.

The justices demanded that their security should be publicly guaranteed given the tensions over the election or else they would refuse to attend hearings, the source said. At least 55 people have died in political violence since the August vote.

The European Union monitoring mission raised the issue of intimidation after the Supreme Court hearing failed to go ahead on Oct. 25, saying it was vital that judges be allowed to work “in freedom and safety”.

“The lack of a quorum is highly unusual for a Supreme Court hearing and has raised serious questions among Kenyan stakeholders, including about possible political interference,” it said in a statement that day. 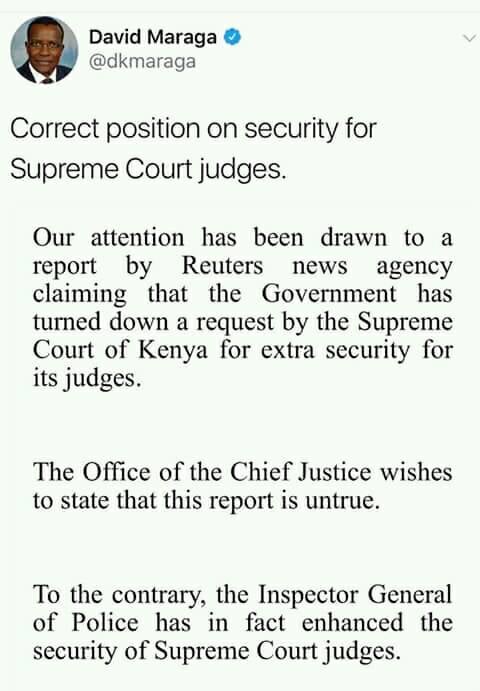 What do u mean fake news while came from main stream media?