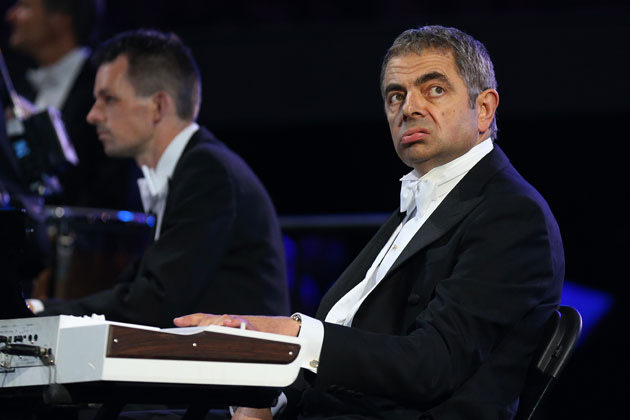 
Ever since actor Rowan Atkinson created his famous character Mr. Bean, the world hasn't been able to watch a scary movie, jump off a diving board, or make a sandwich the same way again. But sadly, the British thespian has announced that Mr. Bean's silent days could be numbered.


"The stuff that has been most commercially successful for me - basically quite physical, quite childish - I increasingly feel I'm going to do a lot less of," the 57-year-old actor told the U.K.'s Daily Telegraph over the weekend. "Apart from the fact that your physical ability starts to decline, I also think someone in their fifties being childlike becomes a little sad. You've got to be careful."
[See also: Adele's son is 'such a cutie,' says pal Alan Carr]


Not that Mr. Bean has ever been a particularly happy character or role model. Yes, he's forever in a chipper mood, but he lives alone, is cripplingly awkward in social situations, has no tact with women, and his best friend is a teddy bear. Nevertheless, there is something about actors who continue to entertain small children well into their middle aged years that comes off a bit strange. (Just ask The Wiggles.)


Atkinson is now turning his attention to more complex roles, primarily in Britain's theatre industry. He'll soon take up the title role in "Quartermaine's Terms" in London's West End, his debut in a "straight play." In 2009, Atkinson also played Fagin in Lionel Bart's "Oliver!," the musical based off of Charles Dickens's novel "Oliver Twist."


Atkinson told the Telegraph that it's the surprise of live theatre that has him moving away from television and film. Still, Atkinson owes a lot to the weird man child that is Mr. Bean. Previous to the "Mr. Bean" show, which ran from 1990 to 1995, Atkinson had performed in famous British TV shows like "Not the Nine O'Clock News" and "Blackadder." But it wasn't until Bean did Atkinson reach worldwide fame. The episode "The Trouble with Mr. Bean" brought in 18.74 million viewers, aired in 245 territories, sparked two feature films and even an animated series.


And just because Atkinson has tired of the character doesn't mean the rest of the world feels the same way. Mr. Bean's appearance at the 2012 London Olympics Opening Ceremony was the most-tweeted throughout the entire celebrations.


Now that Atkinson is hanging up Mr. Bean's trademark tie and putting away the keys to his keylime Mini, let's all think of Mr. Bean this holiday season and have a toast to the man who taught us all how to improperly cook a turkey: