By Richard INGHAM 15 hours ago 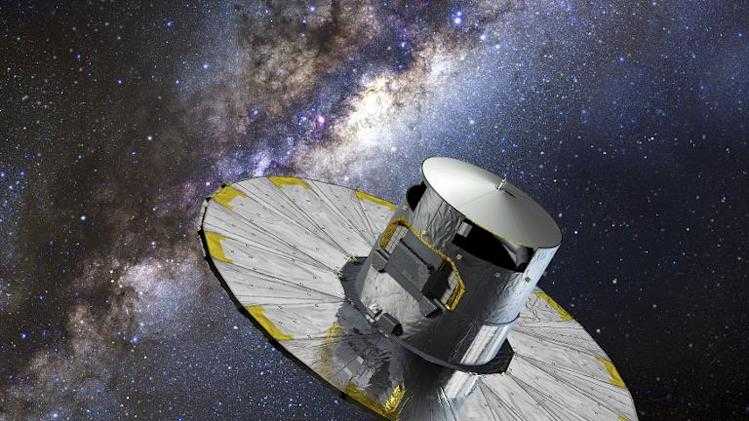 Paris (AFP) - The European Space Agency on Thursday launched an advanced telescope designed to detect a billion stars and provide the most detailed map yet of the Milky Way and our place in it.
[h=2]Related Stories[/h]

The Gaia telescope was successfully hoisted by a Soyuz-STB-Fregat rocket from ESA's space base in Kourou, French Guiana, the agency reported in a webcast.
The star-hunter separated from the last of the rocket's four stages 42 minutes after launch, and mission controllers said everything was fine.
The 740-million-euro ($1.02-billion) device, the most sophisticated space telescope ever built by Europe, aims at building an "astronomical census" of a billion stars, or around one percent of all the stars in the Milky Way.
By repeating the observations as many as 70 times throughout its mission, Gaia can help astronomers calculate the distance, speed, direction and motion of these stars and build a 3-D map of our section of the galaxy.
The stellar haul will be 50 times greater than the bounty provided by Hipparcos, a telescope of the early 1990s whose work provided a gold-standard reference guide still widely used by professional astronomers today.
View gallery 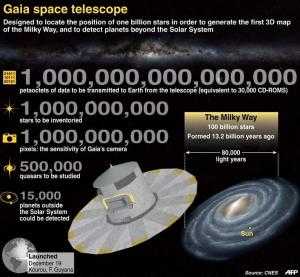 Presentation of the Gaia space telescope, which aims to provide a 3D map of the Milky Way (AFP Photo

"Gaia is the culmination of nine years of intensive work which will enable exceptional advances in our understanding of the Universe, its history and laws," said Jean-Yves Le Gall, head of France National Centre of Space Studies (CNES), which is taking a lead role in the mission.
"We are at the dawn of revolutionising our understanding of the history of the Milky Way," said Stephane Israel, boss of Arianespace, which launched the satellite.
A Soviet-era workhorse of space with an excellent record of reliability, Soyuz is deployed at Kourou under a deal to widen Arianespace's options for the world's satellite launch market.
Gaia will also help in the search for planets beyond our Solar System -- as many as 50,000 so-called extrasolar planets could be spotted during the satellite's five-year life, astronomers hope.
It will do this by measuring the "wobble" in light that occurs when a planet passes in front of a star. The tug of its gravity causes a minute deflection in the stellar light reaching the telescope.
View gallery 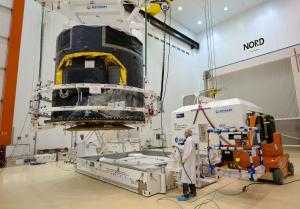 Gaia will also observe the asteroid belt between Mars and Jupiter to help the search for any rocks that may one day threaten Earth, and keep a watch for distant exploding stars, called supernovae, which are rarely observed in real time.
The 2.03-tonne telescope "is so sensitive that it can measure the equivalent of the diameter of a hair at a distance of 1,000 kilometres", or 600 miles, CNES says on its website.
"If Hipparcos could measure the angle that corresponds to the height of an astronaut on the Moon, Gaia will be able to measure his thumbnail," according to ESA.
Gaia will start its star survey in May after taking up position at the so-called Lagrange point L2, located 1.5 million kilometres (937,000 miles) from the Earth, which offers year-round observation of the cosmos without the view being disturbed by the Sun, Earth or Moon.
To stay at L2, the spacecraft will have to perform tiny manoeuvres each month, scrutinised by a network of telescopes on Earth to ensure a hoped-for accuracy of 100 metres (yards).
ESA members have set up a network of 30 centres, manned by 450 people, to crunch the raw data, including a supercomputer at CNES's base in Toulouse, southwestern France, capable of carrying out six thousand billion operations a second.
Even so, it will take years to transform the million billion bytes of input into useable maps and catalogues.

Source:Europe launches billion-dollar Milky Way telescope
You must log in or register to reply here.