Debt repayments to gobble up Sh10.7trillion 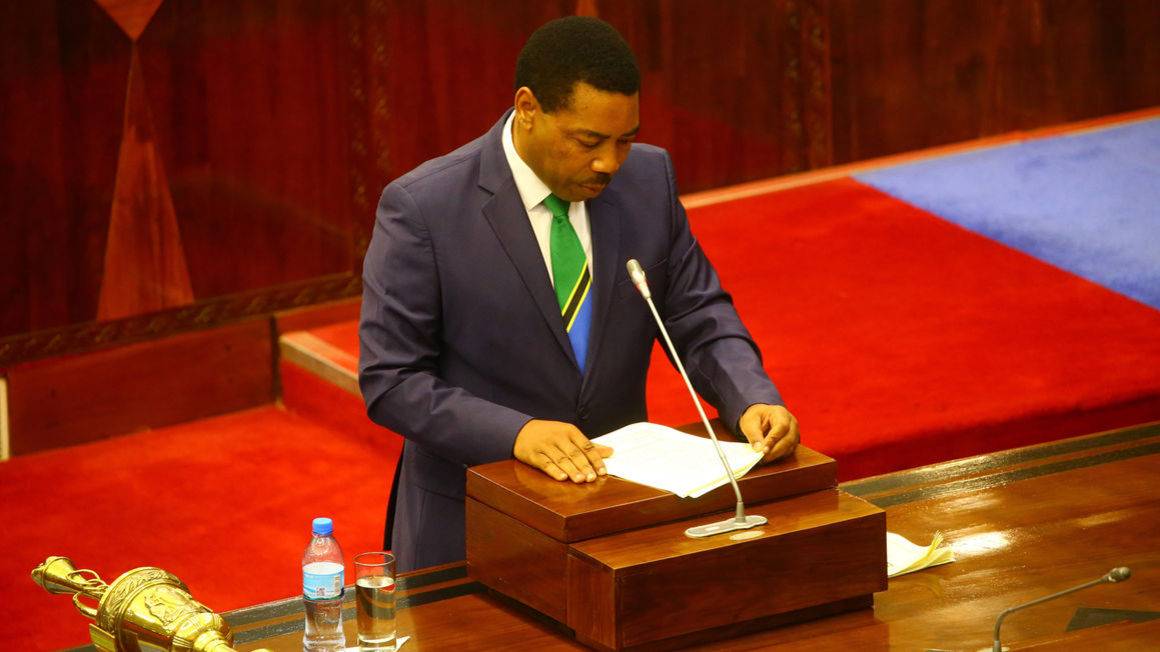 The minister for Legal and Constitutional Affairs, Dr Mwigulu Nchemba, presents in Parliament on behalf of the minister for Finance and Planning some information on the proposed five-year National Development Plan (2021/2022 - 2025/26) and the State Budget for FY-2021/2022, in Dodoma yesterday. PHOTO | JONATHAN MUSSA​

Dar es Salaam. The government will spend a total of Sh10.67 trillion on servicing the national debt and other related services during the 2021/22 financial year, it was announced in Parliament yesterday.

Requesting the House to approve a total of Sh12.961 trillion for 2021/22, Finance and Planning minister Mwigulu Nchemba said out of the money, Sh10.67 trillion will be spent on debt servicing and other expenditures.

According to the 2021/22 budget framework and national development plan, the government plans to collect and spend a total of Sh36.23 trillion during the coming financial year, out of which Sh13 trillion will be spent on development projects alone.

It is envisaged that locally-sourced funds will account for Sh10 trillion of the Sh13 trillion development budget.

Thus, the amount to be spent on debt servicing and other services will be equivalent to 82 percent of the total development budget.

According to Dr Nchemba, during the first ten months of the 2020/21 financial year, the Tanzania Revenue Authority (TRA) collected Sh14.54 trillion to partly contribute to the budget.

This means that the amount budgeted for debt and other services during the coming financial year will be equivalent to 73 percent of the entire amount that the taxman garnered during the period between July 1, 2020 and April 30, 2021.

That notwithstanding, the government says Tanzania’s debt - judging by all sustainability measures - remains sustainable in the short, medium and long terms.

In order to control the national debt, he said, the government revived strategies for the debt medium time supervision aimed at progressing the domestic market of the government surety and completing preparation of projects and execution of the Credit, Guarantee and Grants Act 2020.

“The government also carried out debt sustainability assessment last November whose indications showed that the national debt was within short, medium and long term internationally acceptable levels,” he said.

In total, the Finance minister said, during the first ten months of the current financial year, the government collected and spent a total of Sh24.74 trillion for execution of the budget out of which Sh7.32 trillion was disbursed for implementation of the development budget.

He said Sh6.84 trillion was used for serving the government’s debt; Sh6.09 trillion for salaries and Sh4.49 trillion for ‘Other Charges’ (OC).

Parliament had endorsed a total of Sh34.88 trillion as the government budget in the 2020/21 financial year.

According to him, the government secured Sh3,993 trillion loan out of the Sh4.170 trillion loan target which is equivalent to 95.7 percent reaching April 2021.

He said Sh2.676 trillion was utilized for servicing domestic matured loans, while Sh1.317 trillion was directed to implementation of development projects.

“Sh1.683 trillion was secured by April 2021 out of Sh3.036 projected to be sourced from international sources. The amount has been disbursed for execution of development projects,” he said.

He said Sh1.895 trillion provided by development partners out of Sh2.692 trillion forecasts is equivalent to 70 percent.

According to him, they provided Sh210.21 billion in terms of 0budgetary aid equal to 100 percent of the forecasts and Sh1.455 trillion loans out of Sh2.288 trillion anticipations which is equivalent to 64 percent.

Tabling opinions of the Budgetary Committee, the committee’s vice chairman, Mr Omari Kigua, suggested that the other related services – including serving the consolidated fund, salaries and benefit of judges, human rights commissioners, the Law Reform Commission and the salaries of the Controller and Auditor General (CAG) – should be excluded from the national debt budget.

“This will help to establish the reality of the budget. Other related services should be relocated to other votes with similar responsibilities – or they should be accommodated in the newly-formed fund,” he said.

The NCCR-Mageuzi national chairman, Mr James Mbatia, demanded government transparency on national debts, calling for disclosure of details on creditors, conditionalities and expenditures.
You must log in or register to reply here.