Zimbabwe Arms: China & SA Will Have Blood On Their Hands!

Instead of importing food, the current government in Zimbabwe under ZANU PF has decided to import implements of war. In this incident, once again playing a blind eye to the political situation in the neighboring country, SA is determined to make sure the weaponry reach Zimbabwe. This sort of irresponsibility is reminding me of the recent past, when the government in UK thru its ports enabled the transit of cruise missiles from US to Israel when a war broke out between the later and Lebanon .

China and South Africa are they facilitating a civil war?!!

Durban - South Africa approved a transit permit this week for the shipment of tons of weapons and ammunition destined for Zimbabwe. A Chinese ship with almost three million rounds of ammunitions for small arms and AK-47s, about 3 500 mortars and mortar launchers, as well as 1 500 rockets for rocket-propelled grenades (RPGs) arrived in Durban Harbour on Monday shortly before the permit was issued. According to a copy that Beeld has of the ship's cargo documentation, it was finalised on April 1, three days after Zimbabwe's election. It was not known when the order for the weapons had been placed. An inspection by the South African customs authority deemed this consignment "risky" and further shipment was halted for the moment.

According to the South African Revenue Service (SARS), who are responsible for customs control, the six containers in which the weapons had been packed would be inspected by SARS and police officials on Thursday to determine whether they were, indeed, suspect. Part of the shipment apparently also was destined for "clients" in South Africa. Arms-control experts said on Wednesday that there was technically probably nothing wrong with the weapons transaction between China and Zimbabwe, nor with the issuing of the transport permit. Guy Lamb of the Institute for Security Studies said: "It's not a question of illegality, but rather of morality, in light of the tense situation in Zimbabwe, especially if it was to contribute to the situation exploding." The weapons were supposed to be transported by road from Durban to Harare. Besides the transport permit issued by the National Conventional Arms Control Committee (NCACC), a clearance permit from the explosives department of the police is still needed before the shipment can be released.

Minister of Justice Mosiuoa Lekota and Minister of Provincial and Local Government Sydney Mufamadi, who is also the chairperson of the NCACC, or their directors-general usually issue these kinds of permits in consultation with the National Intelligence Service, the Secret Service and the Department of Foreign Affairs. Mufamadi is also part of President Thabo Mbeki's mediation team handling the election crisis in Zimbabwe. Noseweek's Martin Welz brought the shipment's arrival to the media's attention on Wednesday. The Transnet port authority confirmed that the Chinese ship, the An Yue Jiang, anchored in Durban harbour on Tuesday after they had allowed it access in terms of certain protocols. However, when customs personnel examined the ship's manifesto and the documentation specifying the cargo they found, in collaboration with the police, that the cargo was a "potential risk" because there was something wrong with the documents.

According to SARS, the ship was not in the harbour, but within the boundaries of the harbour. The ship was due to enter the harbour on Thursday after which the containers would be opened and all the contents would be inspected. If the SARS officials saw anything suspicious in the consignment it would be referred to the Foreign Affairs Department. The law consequently would determine if the ship or the cargo should be seized. Lamb said it was strange for a shipment of weapons for Zimbabwe to be sent via Durban because the Mozambican harbour town, Beira, had always been used for the shipment of Zimbabwe's military equipment which was then sent by train to Harare. This route was the shortest, fastest route from a port to Harare. Lamb said the shipment's timing was reason for great concern and one which the South African authorities needed to consider. He thought that the debacle potentially could badly undermine the mediation process in Zimbabwe, in which South Africa was supposed to play a cardinal, neutral role. The ministries of defence and foreign affairs referred all enquiries to Mufamadi's office, but no comment was available at the time of going to press.
Click to expand...

China is not a country to care about these things. yeye anajali biashara tu na faida kwake. and unfortunately the same seems to apply to South Africa

gaijin said:
China is not a country to care about these things. yeye anajali biashara tu na faida kwake. and unfortunately the same seems to apply to South Africa
Click to expand...

gaijin said:
China is not a country to care about these things. yeye anajali biashara tu na faida kwake. and unfortunately the same seems to apply to South Africa
Click to expand...

I'm Concerned BUT not Suprised,Lets be honest about this Issue,
This is what is Goin-On day to day in Many of our African Countries, The consignment of Arms to Zimbabwe is just one of we are told about!to me this is a reflection of whats goin-on in Sudan,Congo,Uganda, etc.

**These Cargo Ships,Planes have always Brought 'us' Weapons and 'they' take back with them loads of Strawberies,Flowers,
diamonds. what a shame!!!

Last updated: 04/17/2008 20:56:41
OPPOSITION to a shipment of arms being offloaded in Durban and transported to Zimbabwe increased on Thursday when South Africa's largest transport workers union announced that its members would not unload the ship.

SA Transport and Allied Workers Union (Satawu) general secretary Randall Howard said: "Satawu does not agree with the position of the South African government not to intervene with this shipment of weapons.

"Our members employed at Durban Container Terminal will not unload this cargo neither will any of our members in the truck driving sector move this cargo by road."

He said the ship, the An Yue Jiang, should not dock in Durban and should return to China.

"South Africa cannot be seen to be facilitating the flow of weapons into Zimbabwe at a time where there is a political dispute and a volatile situation between the Zanu-PF and the MDC."

"The view of our members is that nobody should ask us to unload these weapons," he said.

Satawu said it planned to engage support from the Congress of SA Trade Unions (Cosatu).

Defence secretary January Masilela on Thursday that the scrutiny committee of the National Conventional Arms Control Committee's (NCACC) scrutiny committee, which he chairs, had approved the conveyance permit on Monday already.

He said a inspection team from the NCACC would still have to ensure the cargo met the requirements of the permit before the cargo could begin to be transported to Zimbabwe.

The permit would be endorsed by the NCACC when it meets next month.

Asked about the controversy surrounding the shipment Masilela said: "This is a normal transaction between two sovereign states. We are doing our legal part and we don't have to interfere."

In Cape Town, government communications head Themba Maseko said the country could not stop the shipment from getting to its destination as it had to be seen to be "treading very carefully" in its relations with Zimbabwe, given the complexity of facilitating talks between the Movement for Democratic Change and Zanu-PF.

Chris de Vos, the secretary general for the United Transport and Allied Trade Union, said the union was "not happy" about the arms shipment being transported through South Africa.

"We are going to request an urgent meeting with the management. We are aware that members are very uncomfortable with the situation," he said.

He said that while no decision had been taken by the union on offloading the weapons and arms, the union leadership was not in favour of the weapons being transported.

Democratic Alliance defence spokesman Rafeek Shah said the government's approval to allow the arms to be shipped was "the surest sign yet that government has completely lost the plot on the Zimbabwe issue".

Shah said: "The world's astonishment at President (Thabo) Mbeki's political defence of Robert Mugabe will likely turn into outright anger as we are now not only denying the existence of a crisis in Zimbabwe, but also actively facilitating the arming of an increasingly despotic and desperate regime."

Kallie Kriel, AfriForum chief executive, said the organisation intended organising "an extensive campaign of peaceful demonstrations in an effort to prevent a consignment of Chinese arms from being transported from Durban across South African territory to Zimbabwe".

The SA Institute of Race Relations said on Thursday: "It would be unconscionable for South Africa to allow an arms consignment through its borders en route to Zimbabwe."

Spokesman Frans Cronje said that if the shipment went ahead, "South Africa's culpability in the Zimbabwe crisis would then be without question".

Noseweek editor Martin Welz told Sapa on Wednesday that "the cargo ship was openly delivering a containment of arms for Zimbabwe".

He said he had copies of all the documents, including the bill of lading and a packing list.

The cargo is, according to the documentation, valued at R9.88 million.

Welz said: "It's very detailed and even has the phone numbers."

Increased media interest around the shipment prompted both the SA Police Service and the SA Revenue Service to send their top public relations officers to Durban to deal with media enquiries.

Adriao said he would only comment on the ship once it had docked in port while Lackay said that the work of the SARS "is guided by the SARS Act and the confidentiality provisions in the Act".

Lackay said: "SARS Customs does not release cargo until the Customs declaration has been processed and the requirements of the any other legislation have been adhered to. On the basis of the documents submitted by the shipping line -- the company operating the vessel -- SARS Customs decides whether there is a potential risk, whether cargo must be inspected and whether or not goods will be detained.

"These are standard Customs procedures that apply daily to any cargo vessel entering a South African port of entry. At this time the vessel.

"An Yue Jiang is at outer anchorage or off-port limits and therefore the cargo is not deemed to have been imported into South Africa yet," he said. - Sapa

Now this is increasingly becoming interesting..... thanks Nyambala!
J

Jokakuu, so what do you do?! I'm sure a solution has to be found somewhere.... but is letting weapons in a solution? well you seem to imply....

The reason Mbeki hasnt done anything is that Zim has a lot of money stored in SA, shameful wakiruhusu silaha zipite 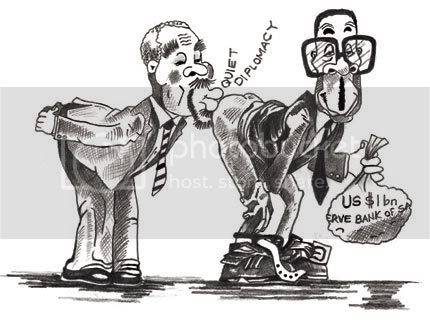 mwanahabari said:
The reason Mbeki hasn't done anything is that Zim has a lot of money stored in SA, shameful wakiruhusu silaha zipite

hauxtable said:
I'm Concerned BUT not Suprised,Lets be honest about this Issue,
This is what is Goin-On day to day in Many of our African Countries, The consignment of Arms to Zimbabwe is just one of we are told about!to me this is a reflection of whats goin-on in Sudan,Congo,Uganda, etc.

**These Cargo Ships,Planes have always Brought 'us' Weapons and 'they' take back with them loads of Strawberies,Flowers,
diamonds. what a shame!!!
Click to expand...