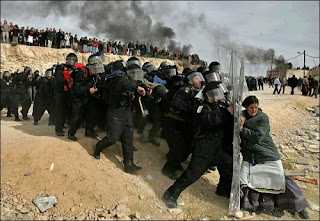 A lone Jewish settler challenges Israeli security officers during clashes that erupted as Israeli authorities cleared the West Bank settlement of Amona, east of Ramallah.
Thousands of troops in riot gear and on horseback clashed with hundreds of stone-throwing Jewish settlers holed up in this illegal West Bank outpost after Israel's Supreme Court cleared the way of demolition of nine homes at the site.

This is the picture of a student, The Unknown Rebel, who tries to stop the tanks in Tiananmen Square by standing in front of them.
The tank driver didn't crush the man with the bags .

The ananymous man stood alone in the middle of the road as the tanks approached. He held two bags, one in each hand. As the tanks came to a stop, he appeared to be trying to wave them away. In response, the front tank attempted to drive around the man, but the man repeatedly stepped into the path of the tank in a show of nonviolent action.

After blocking the tanks, the man climbed up onto the top of the lead tank and had a conversation with the driver. Reports of what he said to the driver vary, including "Why are you here? My city is in chaos because of you"; "Go back, turn around, and stop killing my people"; and "Go away."
Video footage shows that anxious onlookers then pulled the man away and absorbed him into the crowd and the tanks continued on their way.

What are you trying to say? Are you promoting defiance?

Mbopo said:
What are you trying to say? Are you promoting defiance?
Click to expand...

Where there is a will there is a way, no police can stop what one believes
You must log in or register to reply here.