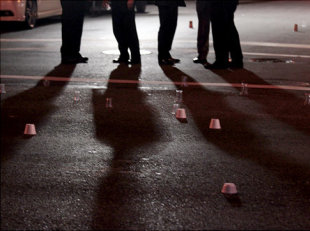 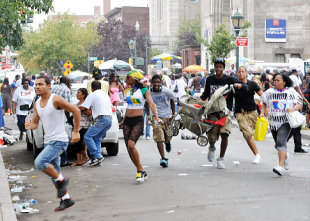 Parade-goers flee in terror after a gunman opened fire on a crowd on Utica Avenue. (Todd Maisel/NYDN)
Two cops were wounded in a gun battle Monday night, capping off a terrifying spate of shootings that left four people dead - one a bystander - and marred Brooklyn's West Indian Day Parade.
The surge of violence wounded eight and put the number of people shot over the weekend around the city to at least 48, including two people who were killed Sunday night. It came the same day the Daily News reported that 24 people were shot in the 24-hour period beginning 6 a.m. Saturday.
The violence during the holiday weekend culminated in a deadly shootout about 9 p.m. Monday on Park Place in Crown Heights, when Leroy Webster, 32, shot Eusi Johnson, 29, to death after they had a fistfight, cops said.
A stray bullet from Webster's pistol pierced through the head of 56-year-old Denise Gay, who was sitting on her front stoop nearby with her daughter, cops said. Gay was pronounced dead at the scene.
Police arrived and Webster began firing at officers, who shot the gun-wielding man several times, mortally wounding him, sources said.
"There must have been 50 or 60 shots fired," said witness Dana Kellstrom, 25. "I saw two people shot down on the ground. It was incredible. I ran for my life."
Two cops shot in Brooklyn gun battle, caps terror-filled NYC Labor Day weekend of shootings | The New York City Local - Yahoo! News
You must log in or register to reply here.
Share:
Facebook Twitter Reddit WhatsApp Email Link