STAN O'NEAL Is Out ! 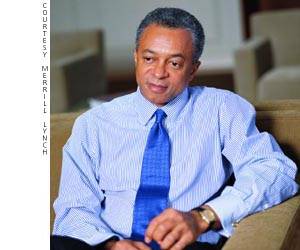 Now the real question is will the new CEO really be able to get too aggressive with write-downs without impairing ML's ability to quickly drive earnings (versus competitors who are much slower to 'mark to market')?

It will be interesting to see who decides to captain a ship that is taking on substantial water in the middle of a storm that appears to be getting worse...


The path from the rural South to the upper echelons of Wall Street is not heavily traveled. Indeed, E. Stanley ONeal (MBA 78) is surely the only person who has made the journey from the fields of Wedowee, Alabama  where he labored on his grandfathers farm picking corn and cotton  to the 32nd floor of Merrill Lynch headquarters at Manhattans World Financial Center.

As president of Merrills U.S. Private Client Group, ONeal oversees sixteen thousand brokers  or financial advisors, as he calls them  in eight hundred branch offices. Also an EVP and a member of the Merrill Lynch Executive Management Committee, ONeal is one of the firms top officers and is frequently mentioned as being on the shortlist to be the next chairman of the 150-year-old firm.

My father told me I wasnt cut out for farm work, says ONeal, whose easy smile and relaxed demeanor almost belie his stature in the pinstriped, power-brokering world of Wall Street. I never took it as an insult. Seated in a conference room with an expansive view of the Hudson River, ONeal recalls that work was hard to come by in Wedowee, population 750, and the options, particularly if you were poor and black, were limited. ONeals mother worked as a domestic, cleaning houses, and when he wasnt harvesting crops with his three younger siblings, he sold and delivered newspapers.

As it turned out, his father wasnt cut out for farming either, and when ONeal was 12, his family moved to a housing project in Atlanta, where his father eventually landed a job at a General Motors factory in Doraville. Stan ONeal attended the General Motors Institute (which later became Kettering University), a co-op program where he alternated between studying engineering and industrial administration and working in the Doraville plant. ONeal, the first in his family to finish college, says of his undergraduate days, I really didnt have an understanding of the world or any role models, but I had a strong desire to learn, and I think that is what pulled me through. After graduating in the top 20 percent of his class, ONeal returned to Doraville, working as a supervisor at the GM facility. When he was accepted at HBS, GM gave him a no-strings-attached scholarship.

I was naive, but I was also undaunted, says ONeal of his arrival at Soldiers Field  his first trip to Boston. I had never had a set of peers like that. They were an extremely sophisticated group who knew about the world, and they really motivated me. One of only a few African Americans in his class, ONeal says simply: Not a lot of people looked like me.

That was also the case in the treasurers office at GM in New York, which he joined after graduating with honors from HBS. After eight years with GM  including a stint as treasurer of GM España in Madrid  ONeal had cultivated an appetite for the deals business. So when Merrill Lynch came knocking, he gladly opened the door, accepting a position as VP of the firms high-yield business. I knew it was a great fit for me, he says.

During the fifteen years he has worked at Merrill, ONeal has proved himself again and again, moving from various positions in different divisions of the firm  financial services, global capital markets, investor strategies, corporate and institutional clients, and corporate services. In 1998, Merrill chairman and CEO David H. Komansky (107th AMP) asked him if hed consider being CFO. This was an opportunity to see the whole firm comprehensively, observes ONeal, who accepted the offer despite never having looked at Merrills balance sheet and knowing that insiders considered the CFO position a thankless assignment. Im a sucker for learning opportunities, he adds, and this was one I couldnt pass up.

After two years as CFO, ONeal rose to his current post, making him the first-ever nonbroker to head the firms brokerage business. This is the best job Ive ever had, and Ive had a lot of good ones, ONeal says, explaining that the rewards, challenges, and people are what keep him most interested. Those challenges include competing for clients in a saturated market, finding ways to serve a more sophisticated group of clients, and continuing to improve the quality of service provided. We have a tremendously successful organization with a legacy of winning. The challenge is to continue to evolve and adapt to the new realities of the marketplace. ONeal cites Merrills Financial Advisory Center and Merrill Lynch OnLine as examples of how the firm has responded to clients changing needs.

While his future looks bright at Merrill, ONeal doesnt speculate about whether he will be asked to take its helm, a move that would make him one of the highest-ranking African Americans on Wall Street. He prefers instead to concentrate on his progress in his current position. I think we are 75 percent of the way there in terms of laying the foundation for client services, but were probably 25 percent in terms of achieving all the things we want to. There is no shortage of challenges or rewards here.

Outside the office, ONeal says he sometimes finds time to play a bad game of golf. He is a member of the HBS Visiting Committee and sits on the boards of the Ronald McDonald House, the National Urban League, and Nasdaq. Recently, he also joined an advisory board of the American Cancer Society to help lessen the racial divide in cancer mortality rates. We as a society have the capability to provide much greater care, he says. Its a matter of marshaling focus and resources. There is an enormous amount of good that can be done.

ONeal is still very close to his extended family, whom he sees twice a year when he and his wife, Nancy Garvey, take their twins to visit Roanoke, Alabama (the town in which he was born, he notes, because the Wedowee hospital didnt serve African Americans). He puts his pride in raising his 10-year-old son and daughter above all his other accomplishments. His goal is to provide them with the same strong sense of morals that his parents instilled in him. I think life is about doing the best that you can with what you are born with, he remarks. Its a fascinating journey to discover what that is.
Click to expand...

In order to be able to stay in high profile position you need to make shareholders happy and to do that you have to achieve three things and those are:
1.Profit
2.Profit
2.Profit and he was unable to do so during the last quarter where losses were very high, therefore he has to go.
G

Bubu ataka kusema said:
In order to be able to stay in high profile position you need to make shareholders happy and to do that you have to achieve three things and those are:
1.Profit
2.Profit
2.Profit and he was unable to do so during the last quarter where losses were very high, therefore he has to go.
Click to expand...

BUBU,
I think the biggest factors in Stan having to go do not relate directly to the losses. My read:

1) Announcing $5 billion, then only two weeks later having to raise that over 50% demonstrated a lack of systems or management or the relationship with the auditors

2) The approach to Wachovia showed some panic, again raising the spectre of systems and management and going around the board to do it? Simply not excusable.

My guess was #2 was the bigger issue.

The credit market crisis was on the verge of claiming its biggest casualty last night, as Stan O'Neal, the embattled chief executive of Merrill Lynch, prepared to resign his position after losing the support of boardroom colleagues.

In five years at the helm of one of Wall Street's largest firms, Mr O'Neal had worked to replace Merrill's paternalistic reputation with a strategy of risk taking and a push into exotic new trading areas. But he was brought down by spiralling losses on risky mortgage-backed assets, and the revelation of illicit talks to sell the company to a rival.

An emergency board meeting on Friday decided that he had to go, and it was reported yesterday that directors had spent the weekend discussing the terms of his departure, and the timetable for appointing a successor.

The company declined to comment on the rumours, which had pushed Merrill Lynch shares more than 8 per cent higheron Friday and kept them rising in after-hours trading.

The terms of a likely pay-off remained unclear, since many of the details are at the board's discretion. Members could withhold yet-to-vest share options worth about $76m (&#163;37m), for example. Mr O'Neal was paid $48m last year, a 30 per cent pay rise thanks to a mortgage market that was then soaring and which had propelled Merrill to a record annual profit of $7.5bn.

Last week, the bank admitted it plunged into the red in the third quarter of 2007, having lost $7.9bn on mortgage-backed securities and structured credit products that rely for their value on the home loans of low-income Americans. These have collapsed in value as Americans began defaulting on their mortgages in record numbers.

A further write-down of loans for private equity deals pushed Merrill's total write-down to $8.4bn, several billion dollars more than it had warned Wall Street to expect. The confusion over its internal valuation procedures added to the perception that Mr O'Neal had taken the company into territory for which it was ill-equipped. That view was underlined by one of his predecessors yesterday. Daniel Tully, who was Merrill Lynch chairman for four years before stepping down a decade ago, told a Bloomberg reporter that third-quarter losses were "sickening".

"With the help of God, this too shall pass, and the firm will continue to do extraordinarily well, but without the excessive risk that apparently was taken," he said. "I've been in touch with many of our employees and ex-employees and everyone is sick about it, as I am too."

Mr O'Neal's resignation would rob Wall Street of its most powerful African-American businessman, a native of Alabama who earned an MBA at Harvard University. Recently, he angered board members with a secret approach to rival bank Wachovia about a merger deal after the summer's credit crisis hit Merrill's balance sheet.
G

Interesting...
You must log in or register to reply here.