The Sportpesa CEO has announced withdrawal of sponsorship to sports clubs from next year.

This follows the government's decision to impose a 35 per cent tax on net profits accrued by betting and gaming firms.

“The expected financial projection will force closure of firms and that there’s no company in the country which has the capacity of complying to the tax.“The tax bracket tax is not fair as some operators can barely sustain their businesses,” said Karauri in a press briefing in Nairobi.

He said the cost of doing business will be affected by the finance law that President Uhuru Kenyatta signed on Wednesday.

"The Gaming Operators in Kenya are likely to stop funding and carrying out Corporate Social Responsibility projects and this will put a lot of youths out of jobs" said Karauri, a move expected to affect soccer clubs AFC Leopards, Gor Mahia.

Other sporting clubs benefitting from Sportpesa sponsorship were the Kenya Boxing League and rugby teams.

Two months ago, National Treasury proposed a uniform tax of 50 per cent, but following stakeholder meetings, Parliament passed the Finance Bill 2017, deleting the contentious clause on taxation for betting, lotteries and gaming activities.

The lawmakers amended the clause reducing the taxable rate to a uniform 15 per cent; however the bill was rejected by the President with recommendations that tax on betting, lotteries and gaming activities should be at 35 per cent.

Previously, lotteries were taxed at five per cent, betting firms or bookmakers at 7.5 per cent, casino gambling at 12 per cent and competitions like raffles at 15 per cent.

However the hike in taxes will lead to a significant negative drop in market sales. Lottery could drop by 14.6 per cent,35 per cent in casino gambling and 2.1 per cent in Sportpesa.

Kenya Revenue Authority has collected about Sh4.7 billion in corporate tax from betting firms in the two years from 2014 to 2016.

Karauri warned that going forward, the taxman may get nothing in the form of collections from the industry going by the new law.

Association of Gaming Operators Kenya yesterday expressed fears that the recent 35 per cent tax on net profits accrued by betting and gaming firms will kill the industry.

Association of Gaming Operators Kenya chairman Ronald Karauri said the tax is punitive and will kill all betting, gambling and lottery firms in business and may send them to work underground.

A few days ago Kenyan President Uhuru Kenyatta signed the Finance Bill 2017 into law. Among other things, the new bill imposes a uniform 35% tax rate on all gambling revenue – betting, gaming, lotteries and prize competitions. Before now, Kenya-licensed sports betting operators such as SportPesa had been subject to a rate of just 7.5%.
According to a recent survey, Kenyans are among the biggest gamblers in Africa. As much as three-quarters of 17-to-35 years olds in the country have admitted to having placed a bet. source: Kenyan Sports Betting Firm SportPesa Ends Local Sport Sponsorship Over Gambling Tax Hike
Click to expand... 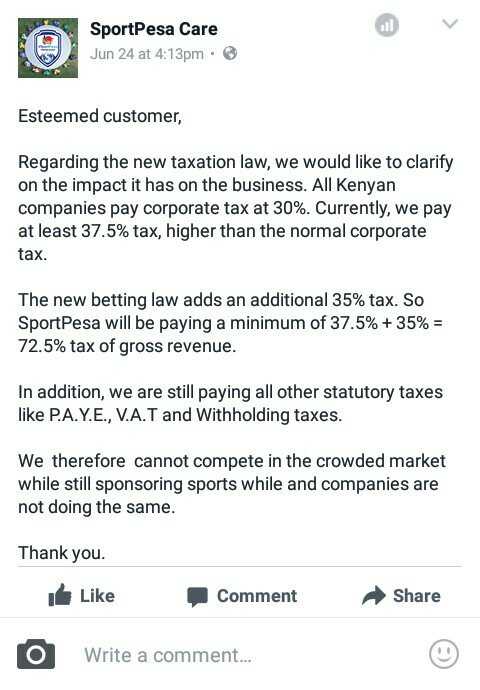 Gambling business is a shady investment, it is harmful to our society, I would be happier if it was banned altogether. I hate this trend with every bit of my flesh. That Kenyans are the leading betters in the continent is a reputation I find hard to stomach. Thank God sumbody is cracking the whip!

I dont care what football teams these people sponsor, this is a luxury we can do without.

According to a recent survey, Kenyans are among the biggest gamblers in Africa. As much as three-quarters of 17-to-35 years olds in the country have admitted to having placed a bet. source: Kenyan Sports Betting Firm SportPesa Ends Local Sport Sponsorship Over Gambling Tax Hike
Click to expand...

That was a very wrong move by our government, since sportpesa came by sports in Kenya changed for the better. Now we are going back to our dark days of wrangles every now and then in the sports industry. Kenyan government can't manage sports the way sportpesa did. It will be so sad, when tax money is collected by the government then ending up in some greedy people's stomach. Thumbs down to our greedy politicians who always want everything good for themselves.