[h=3]Obama reads from Bible during NYC 9/11 ceremony[/h]
NEW YORK (AP)  President Barack Obama is reading from Psalm 46 as part of the ceremony at the World Trade Center site to mark the 10th anniversary of the Sept. 11 attacks.


Each year at the city's Sept. 11 observance, politicians are asked to read passages from selected texts, rather than give speeches, so as not to detract from the centerpiece of the ceremony, the reading of victims' names.
Psalm 46 speaks of God as refuge and strength, dwelling in "his city."

Former President George W. Bush and former New York Mayor Rudy Giuliani were to read as well.
The city is observing the anniversary Sunday at the National September 11 Memorial at the World Trade Center site. The ceremony is also serving as the memorial's official opening. 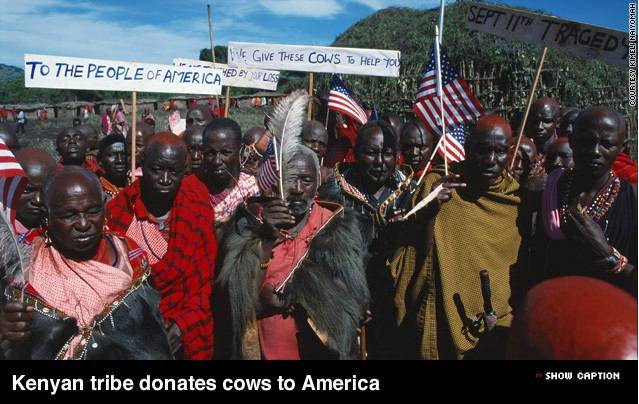 By Tom Goldstone, CNN
As America looked inward in the days, weeks and months after September 11, 2001, others around the world made extraordinary gestures toward the United States. &#8232;We were all so focused on ourselves  understandably so  that many probably missed the fact that Irans President Mohammad Khatami condemned the attacks, that Ireland and Israel held full national days of mourning, that the Afghan Taliban told American children [that] Afghanistan feels your pain.

You are even less likely to have heard what could be one of the most touching reactions of all. This is the story of how a destitute Kenyan boy turned Stanford student rallied his Masai tribe to offer its most precious gift to America in its time of need.

God bless America and God bless the President of the United States of America.
You must log in or register to reply here.