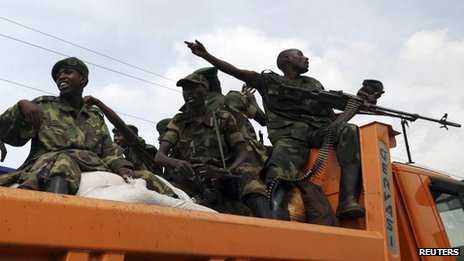 The rebels are pulling back under a deal mediated by Uganda

[h=2]Rebels in eastern Democratic Republic of Congo have begun to withdraw from the key city of Goma under a regionally brokered agreement.[/h]
The M23 rebels were seen boarding trucks and heading out of the city, 11 days after seizing it from government troops backed by UN peacekeepers.
The deal calls for the rebels to withdraw towards the town of Kibumba.
The M23 rebels deserted from the army in April, with some 500,000 people fleeing their homes in ensuing unrest.
The UK has suspended aid to Rwanda, amid concerns about the country's role in the conflict.
Both Rwanda and neighbouring Uganda strongly deny UN accusations that they are backing the M23.
Humanitarian crisis Reports on Saturday spoke of a number of flat-bed trucks carrying several hundred rebels out of Goma.

Some 1,500 M23 fighters were reported to have occupied the city.
The M23's military chief, Col Sultani Makenga, said: "We are leaving today. We are leaving for peace."
According to the withdrawal accord, mediated by Uganda, the rebels are to pull back to a 20km (13 mile) buffer zone around Goma.
The accord had stipulated that the M23 would leave behind 100 soldiers to guard the airport in conjunction with a UN contingent and a government unit.
However, Sy Koumbo, a spokesman for the UN in Congo, told Associated Press that the rebels had tried but failed to force their way into the airport to seize weapons on Friday.
The rebels said recovering the materiel was part of the withdrawal process.
Mr Koumbo said an agreement was reached and the rebels were not given the arms.
However, one Goma resident told Agence France-Presse that the rebels had "stolen so much - vehicles, ammunition, everything" and was happy to see them leave.
More than 270 Congolese policemen have arrived in Goma's port as part of the transition.
The UN has warned of a growing humanitarian crisis in the region because of the recent fighting.
Goma is the key city in an eastern border area that has seen years of conflict sparked by ethnic and political differences, and grievances over mineral resources.
Some five million people died during the 1997-2003 DR Congo conflict, which drew in several regional countries, including both Rwanda and Uganda.
You must log in or register to reply here.