Palestinian submit bid for statehood at The United Nations

Today September 23, 2011, the Palestinians have submitted and/or asked the United Nations to accept them as a member state.

How can people that refuse to accept their neighbors right to exist can demand rights?

Genesis said:
How can people that refuse to accept their neighbors right to exist can demand rights?
Click to expand...

...,as the US again undermines its security and its global position, pointlessly and gratuitously, in blind allegiance to an ungrateful and self-destructive ally,......

Going back to the 67 borders is the same as the U.S giving back land to Mexico. And if you really want to take it way back I think the Jewish people were there first. This is a relatively small area surrounded by much larger muslim countries. There isn't anywhere else for the Palestinians to go???

Semetic said:
Going back to the 67 borders is the same as the U.S giving back land to Mexico. And if you really want to take it way back I think the Jewish people were there first. This is a relatively small area surrounded by much larger muslim countries. There isn't anywhere else for the Palestinians to go???
Click to expand...

JERUSALEM (Reuters) - Israelis reacted coolly on Friday to Palestinian President Mahmoud Abbas's U.N. quest for statehood, and some said his impassioned speech at the United Nations had only harmed the chances of peace.

Telling the U.N. General Assembly he wanted peaceful relations with Israel, Abbas painted a bleak picture of life for ordinary Palestinians under occupation.

Israeli analysts said his words would not create an environment of trust conducive to fruitful negotiations.
"He blamed Israel for all the Palestinian problems and it showed that bilateral talks now cannot be resumed," said Uzi Rabi, a professor at Tel Aviv University and a Middle East analyst.

Abbas says he has beaten a unilateral path to the United Nations after two decades of failed peace talks brokered by Washington, which is increasingly seen by Palestinians as overwhelmingly pro-Israeli.

The United States has made clear it will veto any Palestinian statehood resolution in the Security Council and Israeli analysts have said that independence can come only through difficult direct negotiations, not U.N. maneuvers.

"This was a PR exercise which was all very nice. (Abbas) will get a few days of applause but eventually he will have to negotiate with us," said Alan Baker, an Israeli former peace negotiator and ex-ambassador.

"This speech changes nothing ... but it directed a lot of hostility at Israel and won't add to the confidence of the average Israeli in the possibility of making an accord."

Shortly after the speeches, the Israeli military said it had raised alert levels after getting information that Gaza militants wanted to mount an attack on the frontier with Egypt.

Abbas told the United Nations he had no intention of denying Israel's right to exist, but said he did want to delegitimize the settler movement, with Jewish settlements rapidly eating up land that the Palestinians claim as theirs.

The Jewish Sabbath had already started in Israel when he stood up to speak, so settler leaders were not available for comment. But in the build-up to the speech, Jews living on land seized by Israel in the 1967 war said they were there to stay.
"We don't care what they're up to at the U.N. We have the bible, which says the land of Israel belongs to the Jewish people," said activist Meir

Bartler, 25, from an unauthorized outpost between the Palestinian cities of Ramallah and Nablus.
Some 500,000 Israelis live in the occupied West Bank and East Jerusalem, which Palestinians want as their future capital. Most world powers deem the settlements illegal, but take the view that some of the big blocs are bound to stay part of Israel in any eventual peace deal.

"The real battlefield is not at the U.N.," said Avraham Binyamin, a spokesman for Yitzhar settlement near Nablus.
"It's here on the ground, and one hopes the government and security forces will understand, just as the Arabs and settlers have, that any talk of compromise is destined to fail."

Residents of Israel have grown increasingly disillusioned and even uninterested in the peace process over the years, pointing to the emergence of the Islamist group Hamas as proof of the difficulties of securing an enduring peace deal.

Hamas, which denies Israel's right to exist, has taken control of the Gaza Strip, which Israel quit in 2005. It is at loggerheads with Abbas, who holds sway in the West Bank, although attempts have been made at reconciliation.
"If Abbas wants to resume talks with Israel, it cannot be done by including Hamas," said Ram Haviv, 86, a retired civil servant who lives in Jerusalem.
(Additional reporting by Maayan Lubell; Writing by Crispian Balmer; Editing by Kevin Liffey) 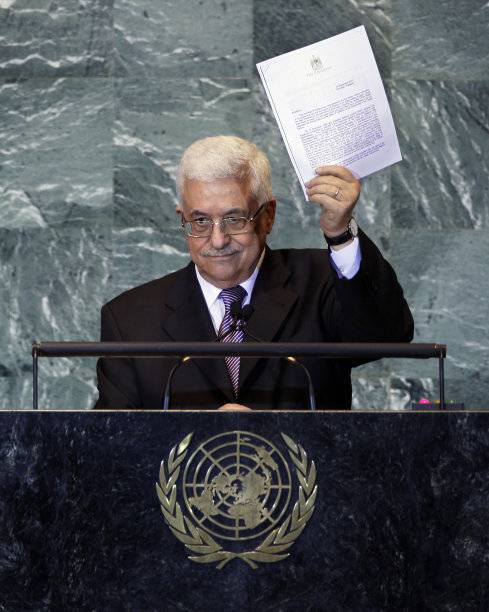 Palestinian President Mahmoud Abbas holds a letter requesting recognition of Palestine as a state as he addresses the 66th session of the United Nations General Assembly, Friday, Sept. 23, 2011 at UN .