This is the shocking moment an Ohio man punched his own lawyer in the face after being sentenced to 47 years in prison for pistol whipping his girlfriend and arson.

David Chislton, 42, struck Aaron Brockler in the face despite being handcuffed, leaving him with a broken nose just been told by Judge Nancy Margaret Russo he faces 47 years in jail after being found guilty of numerous charges.

He turns and takes a swing at Brockler, who is standing to his left. Using both hands he then punches his attorney, knocking him down.

Officials and others in the court then rush to pull Chislton away as other can be heard screaming. The police body cam footage then shows an officer as he holds down the defendant before he is led away.

Another officer can be heard telling him: 'You calm? You know you messed up, right?'

In 2017 he held his girlfriend hostage at gunpoint and threatened to kill her.

He then set fire to the Miles Landing apartment complex in Warrensville Heights which led to a police stand off.
After being told his sentence the Warrensville Heights man turned to hit Brockler before biting him during the violent outburst in the Cuyahoga County Common Pleas courtroom, according to witnesses.

Brockler, who left the courtroom on a stretcher, joked 'it was pretty fun'. 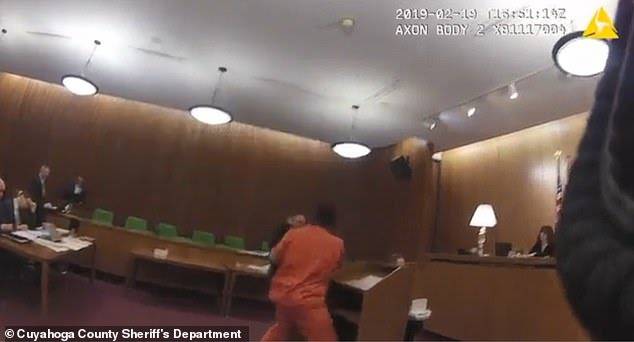 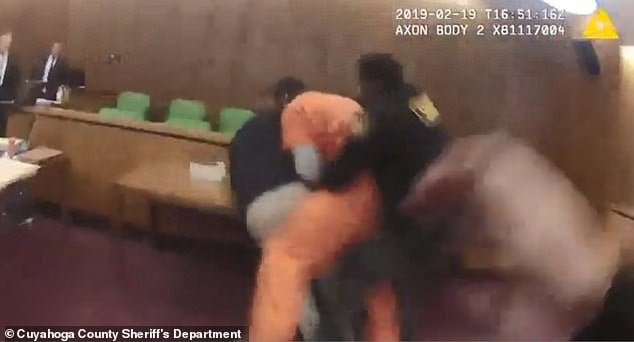 Using both hands he then punches his attorney, knocking him down before officers rush in to pull him off and lead him away Aaron Brockler suffered a broken nose and concussionDavid Chislton, pictured, struck Aaron Brockler in the face despite being handcuffed

He told Fox 8: 'I turned in to talk to him, and I just felt a swoosh and saw stars. And I remember waking up underneath the trial table.

'I went to go turn to tell him "I'll come and see you privately to discuss what your options are," and before I could even get the words out, I just got sucker punched right in the side of the head.

'While his crimes were serious, I think it was just a big number for him and he lashed out against me for whatever reason.'

Victim Brockler said Chislton was left with a 'full range of motion' after he was handcuffed at the front.
He added: 'Typically the inmates are restrained behind their back, but from the minute he came out, he had his hands in front of him.'

Chislton was sentenced Tuesday morning in the Cuyahoga County courtroom, pictured Chislton had just been told by Judge Nancy Margaret Russo he faces 47 years after being found guilty of numerous chargesIn 2017 Chislton held his girlfriend hostage at gunpointChislton then set fire to the Miles Landing apartment complex in Warrensville Height

Defense lawyer Michael Goldberg and eyewitness toldCleveland.com: 'He just wheeled around and punched his defense lawyer. It was pretty heinously violent.'

Cuyahoga County Administrative Judge John Russo said: 'We thank the deputies and others who responded during the incident for their quick actions, and we encourage the sheriff's department to fully review safety protocols for Court proceedings.

'I'm lucky that he didn't get his hands around me and choke me out with the cuffs, or you know, he could've got to the judge. It's not a good situation to be cuffed in the front, in my opinion.'
It is understood Chislton will face additional charges over the attack.