By ALICIA CHANG 11 hours ago 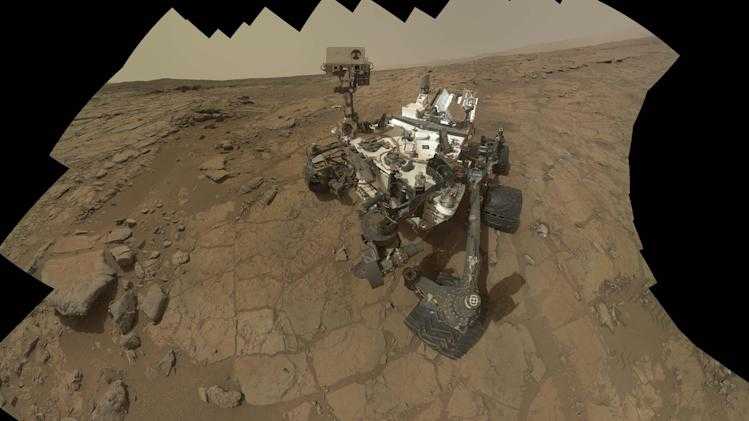 This Feb 3, 2013 image provided by NASA shows a self portrait of the Mars rover, Curiosity. NASA's Curiosity rover has uncovered signs of an ancient freshwater lake on Mars that may have teemed with microbes for tens of millions of years, far longer than scientists had imagined, new research suggests.(AP Photo/NASA)

LOS ANGELES (AP)  NASA's Curiosity rover has uncovered signs of an ancient freshwater lake on Mars that may have teemed with tiny organisms for tens of millions of years, far longer than scientists had imagined, new research suggests.
[h=2]Related Stories[/h]

The watering hole near the Martian equator existed about 3.5 billion years ago. Scientists say it was neither salty nor acidic, and contained nutrients  a perfect spot to support microbes.
"This just looks like a pretty darn ordinary Earth-like lake in terms of its chemistry," said project scientist John Grotzinger of the California Institute of Technology. "If you were desperate, you could have a drink of this stuff."
The lake likely was around for tens of thousands  perhaps hundreds of thousands  of years. Even when the lake dried up, scientists said microbes could have migrated underground, extending the timeframe for habitable conditions to potentially tens of millions of years. Curiosity, though, lacks the tools to search for any fossilized microbes.
The findings were published online Monday in the journal Science and presented at the American Geophysical Union meeting in San Francisco.
"The new results definitely reinforce the idea that past life on Mars was possible," planetary scientist David Paige at the University of California, Los Angeles said in an email.
Paige, who is not part of the Curiosity team, added: "The question of whether life existed or exists on Mars today is still open."
Present-day Mars is dusty and harsh, with no signs of water on the surface. But the red planet wasn't always a radiation-scarred frozen desert.
Early in its history, Mars was more tropical, with streams and rivers. With water plentiful, scientists think it was a place where primitive life could have thrived by feeding on rocks and minerals similar to tiny organisms on Earth that hide in caves and underwater vents.
Around 3.5 billion years ago, Mars underwent a shift and raged with volcanic activity. NASA's older rovers Spirit and Opportunity found geologic evidence that water flowed during this time, but it was highly acidic and considered too caustic for life.
Scientists thought much of the planet had been awash in acidic water until Curiosity found signs of an old streambed near its landing site with a neutral pH.
Analyzing a sedimentary rock known as a mudstone, the nuclear-powered rover next found evidence of a bigger body of water  the ancient lake  that was theoretically drinkable, harboring some of the key ingredients for life including carbon, hydrogen, oxygen, sulfur, nitrogen and phosphorus.
A roving science laboratory, Curiosity touched down in a massive depression called Gale Crater near Mars' equator last year, toting high-tech instruments to drill into rocks, forecast the weather and track radiation.
Now that the $2.5 billion mission has accomplished a main goal  finding a habitable environment  attention has turned to the hunt for elusive carbon-based organic compounds that are fundamental to all living things.
Before setting off on that search last summer, the six-wheel rover used its instruments to determine the age of a rock  the first time this has been achieved on another planet or celestial body.
The rock turned out to be 4.2 billion years old  not entirely surprising since observations from space suggested the bedrock in the crater was this old. Scientists also calculated the rock has been exposed on the surface  and to galactic cosmic rays  for 78 million years, another study found.
This knowledge should help the team find rocks in the foothills of Mount Sharp that have not been too zapped by radiation, said mission scientist Ken Farley of Caltech.
Scientists hope Curiosity will reach the mountain by next June, just a few months shy of its second landing anniversary.

Source: NASA: Ancient Martian lake may have supported life
You must log in or register to reply here.