According to Beijing, such an agreement among the three countries would minimise political risks and plug missing links.

There have been fears that the viability of the SGR within Kenya and beyond could be undermined by failing to link landlocked countries to the Mombasa port because of financial or other considerations.

Chinese Prime Minister Li Keqiang told Kenyan President Uhuru Kenyatta at the China Africa Summit in Beijing two weeks ago to discuss the extension of the railway line from Kisumu to Kampala and then Kigali with Presidents Yoweri Museveni and Paul Kagame.

“The president already spoke with the leaders of Uganda and Rwanda on the possibility of sending a joint team to negotiate for financing of the remaining portion,” said Mr Esipisu. He said Kenya was now waiting for Kampala and Kigali’s response before planning an SGR beyond Kisumu.

“The viability of the (Nairobi to Kisumu) the line is okay. One feature of the SGR investment to Kisumu is the building of a modern port there. Kisumu to Malaba is viable with Uganda and Rwanda on board,” Mr Esipisu said.

On May 31, President Uhuru Kenyatta launched the operations of the first phase of the railway from Mombasa to Nairobi that cost $3.27 billion. He also announced a feasibility study for Phase 2B of the 350km line from Naivasha to Kisumu, for which China has committed a $3.6 billion loan. China is also funding the section from Nairobi to Naivasha at $1.5 billion.

Kenya Transport Cabinet Secretary James Macharia said the terrain in the Rift Valley is the reason it costs more from Nairobi to Kisumu (350km) than Mombasa-Nairobi (472km).

“We have to dig tunnels and construct more bridges across the landscape. That will obviously cost more,” he said in a briefing to journalists.

Sources said a joint project was appealing to the three countries. Uganda has been negotiating a $2.9 billion loan deal for the 293km section from Malaba to Kampala.

“We have to wait for our neighbours to decide on the plans for the last phase of this project before we can get the funds. China really doesn’t want to fund a white elephant project,” Uganda Finance Minister Matia Kasaija said in an interview with Bloomberg.

He said the China Export-Import Bank was only willing to fund the project if it was linked to the Kenya line at Malaba.

A Uganda government report released in April concluded that the Kenya SGR had the most potential to spur growth in the landlocked country. It said an SGR linked to Mombasa was shorter and more dependable because of the ongoing expansion of the Kenya port. Rwanda said last year it would link its SGR to the one proposed in Tanzania. 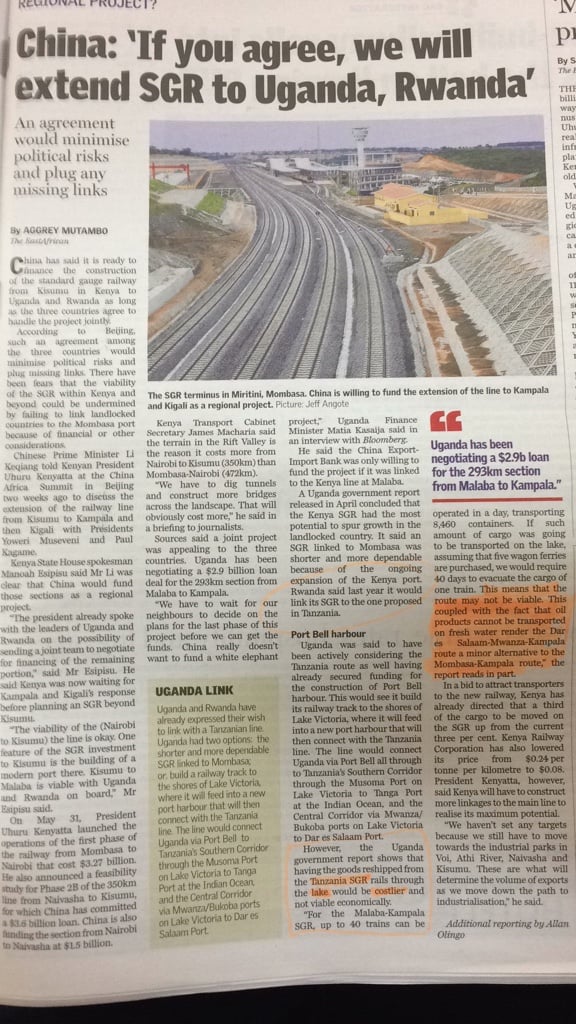