Kenya has overtaken Ethiopia to regain its coveted prize as the biggest economy in the Eastern Africa region, new data by the International Monetary Fund (IMF) shows.
With a projected gross domestic product (GDP) - the monetary value of all goods and services produced in a country - of Sh9.9 trillion in 2019, Kenya’s economy is bigger than that of all the countries in the East and Central Africa.

Moreover, IMF expects Kenya to remain at the pole position in the next four years, with the country’s GDP touching Sh15.8 trillion by 2024.

Ethiopia is the second largest economy with an estimated GDP of Sh9.1 trillion as of 2019, having been overtaken by Kenya in 2017.

SEE ALSO : MOTORSPORTS: Bhardwaj leaves a huge gap
Tanzania has a GDP of Sh6.2 trillion while that of Uganda is Sh3.66 trillion.
Rwanda, one of the fastest growing economies in the world, has a GDP of Sh1 trillion, which is just about the size of Nakuru’s economy, according to a survey by the Kenya National Bureau of Statistics (KNBS).

The GDP for Burundi and South Sudan is Sh357 billion and Sh368 billion respectively as at 2019, IMF data shows.

After 22-years of being the undisputed economic champion in the region, Addis Ababa beat Nairobi to become the largest economy in 2016, dealing a blow to Jubilee administration which had only been in power for three years by then.

Increased investments in infrastructure, coupled with a strong macro-economic environment, seems to have helped Kenya beat Ethiopia which is in a political quagmire as it edges closer to elections this year.

SEE ALSO : No time to breathe as Kenyans seek glory at first world games
Kenya and Ethiopia have been fighting it out not only in a show of GDP, but also in seducing investors, who has the best coffee and also who has the best athletes.
They built a railway, Kenya also built hers.

Ethiopia’s reformist new Premier Abiy Ahmed has given investors a lot of incentives that have seen some investors flocking to Addis Ababa. However, protectionist measures, which include restricting expatriation of foreign exchange, has been their Achilles heels.
Most of their sectors remain locked out from foreign involvement, although Safaricom has announced intentions to make incursions into the Horn of African country.

Kenya’s most ambitious project, Lamu Port-South Sudan-Ethiopia-Transport (Lapsset) Corridor project, has been crafted with the intention of winning over Ethiopia with its huge population.

SEE ALSO : Tuju now barred from disposing of properties in Sh1.5b loan dispute
For the last six years, Kenya has maintained an average GDP growth of 5.7 per cent between 2013 and 2018.

But most Kenyans insist they have not felt that growth.
Despite massive infrastructural investment in the country that saw a host of the country’s key economic indicators rally, there was little trickle-down effect to the wananchi economy.
Notably, the bulk of the investment hardly found its way in the economy, but instead went to foreign contractors and companies.

Every macro-economic indicator looks good.
SEE ALSO : Milk battles escalate amid snag over imports, pricing
But on the ground, things are different. Hundreds of thousands of college graduates have in the last five years joined an expanding jobless corner, even as a few, well-connected individuals known as ‘tenderpreneurs’ took home all the loot in the private sector.
Despite the growth, the number of full-time workers including farmers, hawkers, masons, teachers, doctors, engineers, jua kali artisans, ICT specialists, miners, real estate developers, painters, and musicians — increased by a paltry six per cent in those five years, according to official State data.

Only 482,000 new jobs were created - just about the total number of students that graduate annually from all of Kenya’s universities.

An additional 20,000 people saw their monthly income graduate to over Sh100,000, which was slow growth compared to 76,804 employees that took home six-figure salary by the end of 2017.

By end of 2018, the number of people in formal employment declined to its lowest levels, with dispirited college graduates helplessly plunging into the ubiquitous informal sector, where the incomes are erratic and what they earned was too little to help them navigate a punitive cost of living.

The economy was growing, but businesses and households were struggling to repay their loans. Bad loans, or those which have not been serviced for more than three months, as a fraction of total loans kept increasing from a low of 4.7 per cent in December 2012 to current levels of 12 per cent.

Jeff Gables, the head of Absa Economic Research, noted the anomaly was uniquely Kenyan, nothing like it in other African economies. The relationship between Non-Performing Loans (NPLs) and GDP growth is normally inverse - an expansion in the economy always leads to a reduction in bad loans.

However, Central Bank of Kenya Governor Patrick Njoroge insisted that the issue of growing NPLs should be looked at in isolation, noting that with the government paying part of its pending bills, bad loans are bound to come down.

The government, long known to be poor at doing business, was crowding out the private sector with its huge appetite for debt. It has since borrowed close to Sh3 trillion from the local market over the last six years.

However, Ethiopia has been having problems of its own, which might have contributed to the slag in growth. There have been reports of ethnic clashes and these, could get worse, as the country heads to elections later this year.

But Ethiopia’s growth trajectory has been miraculous. In 2000, Ethiopia, the second-most populous country in Africa, was the third-poorest country in the world.

Its annual GDP per capita was only about Sh65,000 ($650). More than 50 per cent of the population lived below the global poverty line, the highest poverty rate in the world.
From 2000 to 2016, Ethiopia had the third-fastest growing economy in the world, behind China and Myanmar. The country’s poverty rate fell to 31 per cent by 2011, according to the World Bank’s estimates.

Several manufacturing companies even decided to relocate from Kenya to Ethiopia in protest of the high cost of electricity.
A senior member of the Kenya Association of Manufacturers told The Standard that another company that makes biscuits would also be moving its base to Ethiopia on the account of high cost of production.

Despite Kenya’s increased production of electricity, especially with the addition of geothermal power to the national grid, the cost of power has remained relatively high. It rose from Sh11 per kilowatt at one point during former President Mwai Kibaki’s term to the current Sh21.

Peter Munya, when he was Trade and Industry Cabinet Secretary, conceded that the cost of power was a major constraint in Kenya’s goal to be regionally competitive. “Key constraint of manufacturing has been the cost of power, but the government has been consistently addressing it,” said Munya.

But Kenya seems to have done well, and there have even been reports of some flower companies that shifted base to Ethiopia returning.

There have, however, been unease that these other East African countries, might be luring investors at the expense of Kenya.

Observers note that underpinning the strong growth in these countries - including another fast-growing member of the EAC, Rwanda - is their relatively strong governance structures.
Most of these countries have zero-tolerance towards corruption and wastage that have become endemic in Kenya. Of the nine Eastern Africa countries, only Uganda ranks above Kenya in Transparency International’s corruption perceptions index.

Tanzania, another East African country that has been keen to upstage Nairobi as the gateway to the region, has also seen its economy slow down following what some critics have termed as anti-business policies by President John Magufuli.

Last year, the IMF lowered its forecast for Tanzania’s economic growth in 2019 and in 2020 to around four per cent from a previous forecast.

When you don't understand English, just shut up your filthy big beak,lest you want to suffer irreparable damage to your repute
N

Tanzania, another East African country that has been keen to upstage Nairobi as the gateway to the region, has also seen its economy slow down following what some critics have termed as anti-business policies by President John Magufuli.
Click to expand...

The biggest economy that can not afford to buy things... Not even a presidential jet costing few million Dollars!

Mikopo Chefuchefu said:
The biggest economy that can not afford to buy things... Not even a presidential jet costing few million Dollars!
Click to expand...

The Global Partnership for Education has approved a grant totaling US$112 million to build on Tanzania’s successful efforts to get more children in school and learning – especially girls and children from disadvantaged backgrounds.

The Global Partnership for Education has approved a grant totaling US$112 million to build on Tanzania’s successful efforts to get more children in school and learning – especially girls and children from disadvantaged backgrounds. 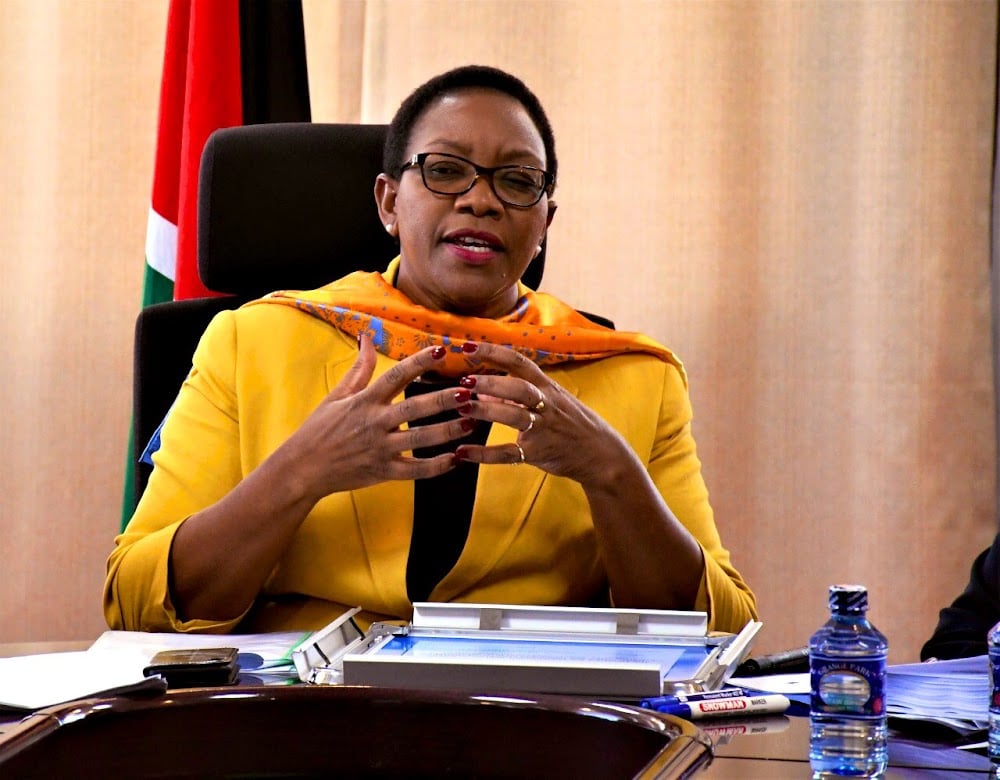 Global Fund said 50 per cent of the current grant must go to HIV, malaria 32 per cent and TB 18 per cent.

The Global Partnership for Education Secretariat approved US$200,000 to prepare a new education program in Kenya.