Chelsea have parted company with manager Avram Grant after terminating the Israeli's contract. Grant's future has been under debate almost from the moment he inherited the Stamford Bridge reins from Jose Mourinho and his eight-month tenure is now at an end just three days after his side lost to Manchester United in the final of the Champions League.

Despite the constant questioning of his position at the club he has been credited with doing a fine job in taking the Red Devils to the final day of the Barclays Premier League title race and narrowly missing out on European glory on penalties. A statement on the club's official website read: "Chelsea Football Club can confirm that Avram Grant has had his contract as manager terminated today. This follows meetings over the last two days.

"Everybody at Chelsea FC would like to thank Avram for his contribution since taking over as manager last September. "We will now be concentrating all our efforts on identifying a new manager for Chelsea and there will be no further comment until that appointment is made."
Despite the Blues' strong end-of-season surge under Grant, the ultimate lack of silverware - as well as his apparent failure to bring the kind of free-flowing, attacking football desired by owner Roman Abramovich - appears to have been his undoing. The futures of Chelsea assistants Steve Clarke and Henk Ten Cate are unclear, but no official word has yet been given on their positions.
The likes of Barcelona's Frank Rijkaard, Inter coach Roberto Mancini and Russia's Dutch boss Guus Hiddink have all been linked with the job in recent weeks and any such appointment would be expected to bring their own staff.
Click to expand...

AVRAM GRANT has been booted out of Chelsea.

The Blues sacked the Israeli today and will now step up their search for a new boss. Owner Roman Abramovich could move for former Barcelona manager Frank Rijkaard or current Russia boss Guus Hiddink.

Grant lasted less than a season at Stamford Bridge after failing to win any silverware.

A statement read: "Chelsea Football Club can confirm that Avram Grant has had his contract as manager terminated. This follows meetings over the last two days.

"Everybody at Chelsea would like to thank Avram for his contribution since taking over as manager last September.

"We will now be concentrating all our efforts on identifying a new manager for Chelsea and there will be no further comment until that appointment is made."

Grant took over from Jose Mourinho in September and took Chelsea to the finals of the Champions League and the Carling Cup.

He also pushed Manchester United to the final day of the Premier League title race.

Mourinho: Grant was a loser

JOSE MOURINHO has hammered the final nail in Avram Grant's coffin by branding the sacked Chelsea boss a "loser".

The Special One was axed by the Blues in September, heralding the start of Grant's reign.

But after a trophyless season, in which the Stamford Bridge club were second in the Champions League, Carling Cup and Premier League, the Israeli was axed by Roman Abramovich.

Mourinho, who is expected to return to management this summer, believes the Blues' season under Grant can only be classed as a failure.


The Portuguese boss said: "In my philosophy it was a very bad one because in football "almost" means defeat.

"After two titles per season for the last three years there were zero titles this season.

"In my philosophy that means a really bad season.

"Maybe in the philosophy of a loser this was a great season, which I respect."

Duncan Castles The Observer,
Sunday May 25 2008 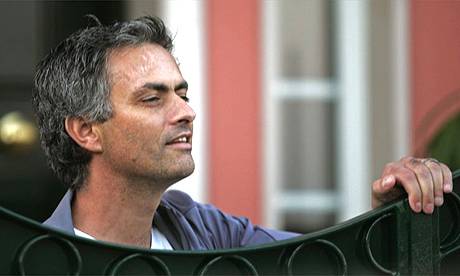 Avram Grant has been sacked by Chelsea, on the day José Mourinho broke his long silence on his successor at Stamford Bridge by criticising the Israeli's failure to win a single trophy. The Portuguese went on to suggest that the football philosophy of his successor is that of 'a loser'.

Mourinho's exclusive interview with The Observer comes as it is revealed that Roman Abramovich made the Portuguese manager the extraordinary gift of a limited edition Ferrari worth more than £2million, in the immediate aftermath of Grant's debilitating Carling Cup final loss to Tottenham.

Asked if Chelsea's campaign had been the good one Grant depicted it as, Mourinho said: 'That depends on your philosophy of leadership. In my philosophy it was a very bad one because in football "almost" means defeat and Chelsea almost won the Carling Cup, almost won the Champions League, and almost won the Premier League. Almost is nothing.

'After two titles per season for the last three years there were zero titles this season, which in my philosophy means a really bad season. Maybe in the philosophy of a loser this was a great season, which I respect.'

Mourinho was in regular contact with Abramovich and several of his former players ahead of the Champions League final and was quick to commiserate with them after their defeat on penalties in Moscow. He told the Russian billionaire that Chelsea would not continue to suffer the misfortune that also cost them two previous European Cup semi-finals to Liverpool.

'I am very sad about what happened. In the last two years this team lost a Champions League final and a Champions League semi-final on penalties. The supporters deserve more, Roman and the board deserve more, top people like [Frank] Lampard, [Michael] Essien, [Claude] Makelele, Ashley [Cole], Didier [Drogba], [Ricardo] Carvalho, [and coaches] Steve Clarke, Mick McGiven and some others deserve happiness. I still think of them as my boys.

'Yes, I was sad. Yes, I felt deeply that it was not fair. But I believe that after an empty season new success will come to Chelsea. And I will always be a Chelsea supporter.'

The chances of Mourinho returning as Chelsea manager have increased significantly in recent weeks. Mourinho was astounded when Chelsea director
Eugene Tenenbaum called in February to inform him that Abramovich had purchased a rare Ferrari for the man he had removed from Stamford Bridge five months previously.

Customised specially for Mourinho, the 612 Scaglietti was one of just 60 produced to commemorate Ferrari's 60th anniversary. While still at Chelsea, Mourinho had told Abramovich that if he could have his choice of cars, the four-seat Scaglietti would be it. The list price is around £250,000, but such is its rarity the secondary-market value is as much as eight times that amount.

Abramovich's gift was made at a time at which he had begun to consider replacing Grant as manager, with Mourinho's name raised as a potential appointment. While such a move appears more feasible now that Grant has gone, sources close to the Portuguese coach say that he is too close to taking a position in Italy for it to happen this close season, although they do not rule it out in the future.

Mourinho is likely to take over from Roberto Mancini at Internazionale and may sign a contract with the Serie A club this week. He has already drawn up plans for next season and is likely to take striker Didier Drogba with him to Italy.

Grant has agreed a £5.2m pay-off from Chelsea. Although bookies were offering odds on as many as 10 different managers to be the Israeli's successor, the favourites are former Barçelona coach Frank Rijkaard, Guus Hiddink and Sven-Goran Eriksson.

Chelsea have been involved in secret conversations with Hiddink, whose position as Russia's national coach is not as secure as has been presented. The Dutchman has a provisional contract to coach Russia until the 2010 World Cup, but that will not be ratified until after Euro 2008 and senior figures in the Russian Football Union are unimpressed by the team's qualification campaign. Vitaly Mutko, newly appointed sports minister and head of the Russian Football Union, said: 'We will evaluate his work after the European Championship.' Although his salary is funded by the Chelsea owner, Hiddink has previously resisted invitations to manage the club for personal reasons.

Eriksson, who was approached about the Stamford Bridge post before Mourinho replaced Claudio Ranieri in 2004, is due to meet Chelsea officials next week after he is formally dismissed by Manchester City. The Swede had been linked with a return to his former club Benfica, but the Lisbon side have appointed Quique Sánchez Flores. The Spaniard was sacked by Valencia last October.
R

Duncan Castles The Observer,
Sunday May 25 2008

Chelsea are reported to have sacked Henk ten Cate from his position as assistant first team coach, casting doubt on the possibility of Frank Rijkaard becoming the next Chelsea manager.

Following the dismissal of Avram Grant as manager last weekend speculation has been rife surrounding the club's future leadership.

Dutchman Ten Cate previously worked with Rijkaard at Barcelona and because of this link it was believed that Chelsea executives could be leaning towards handing control of Stamford Bridge to Rijkaard.