Acacia Jumps in London on Talks for $4 Billion Endeavour Merger

Photographer: Akos Stiller/Bloomberg
Acacia Jumps in London on Talks for $4 Billion Endeavour Merger
by
Thomas Biesheuvel
,
Dinesh Nair
, and
Scott Deveau
16. Januar 2017, 09:57 MEZ
Acacia Mining Plc jumped in London trading after the gold miner confirmed it is in early-stage talks with rival Africa-focused producer Endeavour Mining Corp. about a possible merger of the two companies which have a combined value of about $4 billion. 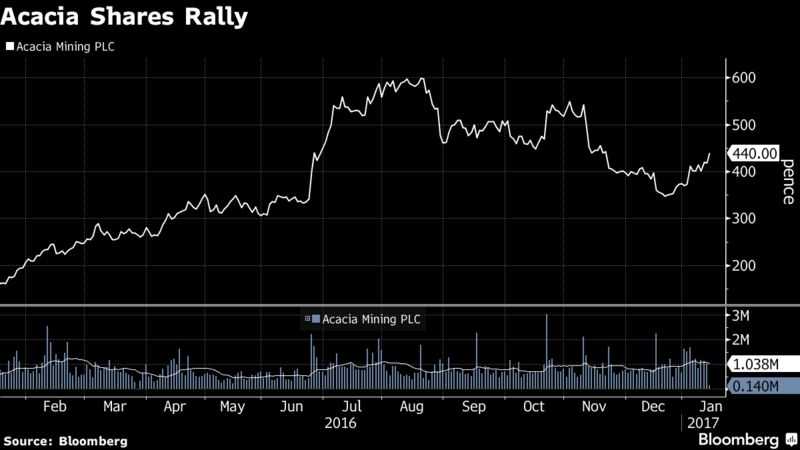 After the close of trading in London on Friday, Acacia said it was in “discussions regarding a possible combination” with Endeavour. Bloomberg News earlier reported that day the companies were exploring a merger, citing people familiar with the talks. Toronto-listed Endeavour confirmed on Friday it had held discussions with Acacia that “may or may not result in agreement of a transaction.”

“On the face of it this appears a sensible African-focused fit, with Endeavour’s longer term growth adding appeal to Acacia’s flat profile,” analysts from Investec Plc wrote in a note on Monday. “The companies are ungeared and a merged company would be of a similar production scale to Randgold.”

Randgold Resources Ltd. is the largest gold producer listed in London with a market value of about $7.7 billion.

A merger would allow Barrick Gold Corp. to reduce its 64 percent stake in Acacia, people familiar with the discussions said last week. A deal could enable Barrick to reduce its stake in Acacia to about 30 percent, one of the people said. Barrick would be likely to approve a deal, Investec said.

The transaction could be structured as a reverse takeover with Acacia buying Endeavour, and the combined company keeping its listing in London, the person said. The plans are not concrete and the structure may change, the person added.

Top-Five
Combined, the companies would be among the top five African gold miners by market value and ounces produced, according to data compiled by Bloomberg. Acacia, which produces gold from mines in Tanzania, has been looking to expand into new areas in Africa, with Chief Executive Officer Brad Gordon naming West Africa as one of the most attractive regions.

The company was initially spun off from Barrick to support growth in Africa. Endeavour has operations in Mali, Burkina Faso, Ghana and Ivory Coast.

“Whilst at this point there is no indication of terms or price we believe that a combination would make sense from Acacia’s perspective as it would increase the group’s footprint into West Africa,” Numis Securities Ltd. said in a note to investors.

Gold producers are benefiting from a rebound in the price of the metal, which has helped push Acacia’s shares up about 160 percent in the last 12 months. Endeavour, which counts billionaire Naguib Sawiris as its largest shareholder, has gained about 230 percent in that period, valuing the Toronto-listed company at about $1.7 billion.

Acacia Jumps in London on Talks for $4 Billion Endeavour Merger

The internet and newspapers are full of the news that Acacia Mining are in discussions with Endeavour Mining to merge the two companies.

In reality, we Tanzanian’s have much to worry about if Endeavour Mining will come to our East African shores.

Acacia Mining might be the “devil” of gold mining in Tanzania and their misconducts of human rights corruption, fraud, tax evasion, environment damages and more is continually exposed in the media but when we research Endeavour Mining, we are afraid that Endeavour might be the “devil” we don’t know and “Ni bora shetani unaemjua kuliko shetani usiemjua” – Better the devil you know, than the devil you don’t know.

Barrick Gold certainly will love the merger idea because, as the media reports, Barrick will reduce their holdings in Acacia Mining from 63.9% to about 30%.

We know from the media that Barrick have been trying hard for some time to get rid of their stake in Acacia Mining but there have simply been no takers. Mining analysts are reported to have said that the reason is because of the huge legal and reputation problems that Acacia and Barrick Gold have in Tanzania.

After all, Acacia’s operational results have been quite impressive. So one must ask, why is there no queue of other mining companies to grab Acacia Mining?

The answer is quite simple: Acacia Mining’s huge legal burdens and potential losses in Tanzania that are waiting in the “shadows”. Who needs burdens like those?

People here and surely overseas are waiting patiently for the outcome of the corruption and fraud investigations that the media reported, which are being carried out by our Corruption Police (PCCB) and other authorities.

And if these investigations are not enough, Acacia Minings website reports that as at 30 June 2016, they were defendants in approximately 255 lawsuits, (probably more since they use the word “approximately”), for a total amount of US$234.9 million.

We know that their head lawyer, Katrina White, suddenly and mysteriously disappeared one day, that was a few months ago. Our friends in the Acacia Mining offices in Dar es Salaam tell us that the rumors, disappointments and uncertainty are still very much alive there and even more so now that there is talk of a “new devil” that might be taking over.

Read more by clicking on this blog

Everything that Barrick Gold & Acacia Mining do, must be looked at very seriously and carefully. Who can explain "why" and "how" they do business?
Look at their partners starting from Munk and the beginning of Barrick Gold. It is terrible and also sad!

We need to act and to get our Nation to see the truth and be aware and then hope that our President will take the necessary steps in our country.

Samantha Cole said:
We need to act and to get our Nation to see the truth and be aware and then hope that our President will take the necessary steps in our country.
Click to expand...

I doubt if he will be able to do anything abt it
You must log in or register to reply here.