WHY North Korean DYNASTY will not last very long. 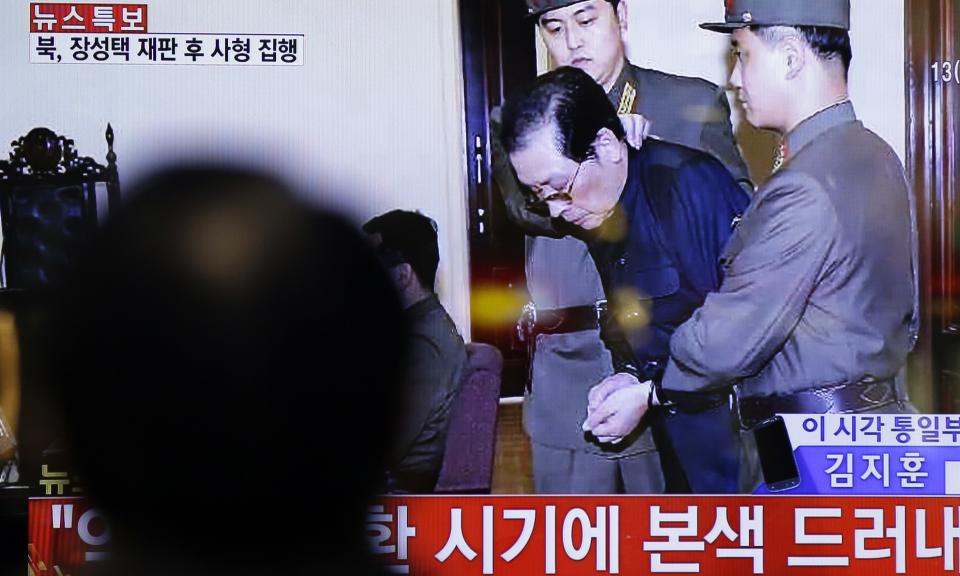 Handcuffed Jang Song-Thaek's fall may also be to family intrigues because his wife uncharacteristically has been left unscathed. Claims of "womanizing" may also be behind his sudden fall from power.................

The heralded machine-gun execution of Kim Il Uns uncle- Jang Song-Thaek- is a pointer that the reclusive regime is gasping for its last breath of survival: thanks not only to almost a half century of American imposed economic debilitating sanctions but also phenomenal technological breakthroughs that has left Kim Il Sung envisaged dynasty palpitating for survival!


The alacrity with which the mockery trials were conducted against the accused was savage, bitterly revengeful and had all the hallmarks of bestiality of a kangaroo court. Nowhere in the history of North Korea had a purge been made this public turning one putative family against the others and what follows thereafter is a closing chapter to a bitter struggle for power that ultimately will consume this regime as we know it today. Todate, North Korea is held hostage by six to seven oligarchical families!


From Kim Il Sung to his successor Kim Il Jong, the jostling for power was common but the duo had the political skills to manage those runaway ambitions in a manner that the dynasty survived but now it seems those six or seven families that run North Korea have clashed head on and there is insufficient space to accommodate all of them in that boiling cauldron.


If you skim through a long list of crimes that led to the execution of Thaek which includes graft, larceny, plotting a coup, debauchery and not clapping hands with great enthusiasm when the young leader of North Korea read many of his scripted speeches, one thing is crystal clear that the decadent culture has percolated all moral fabric of that society and a downfall seemly very inevitable! All these accusations against Mr. Thaek were labeled as treason and sufficient to dispose him off like a despicable dog before a machine gun equipped assassination squad that symbolically ended one seminal familys quest for power while opening other families doors to fill the power vacuum left behind.


North Korean leader Kim Jong Un's influential aunt Kim Kyong Hui remains a part of the regime's inner circle, even after the execution of her husband last week, the second most powerful man in the isolated nation.

The mentioning of "womanizing" as part of the offenses committed by Mr. Thaek is troubling when one takes into account that most of Northern Korean leaders have at one time or another been accused of similar transgressions. Then the question has to be why Mr. Thaek be treated different except that his philandering ways were reproachful to the Royal family. It explains why Mr. Thaek's wife - Ms. Kim Kyong Hui-and family remains untouched even after he was executed.

The long list of alleged felonies indicate that the stalinist ideology that has defined and held this nation together is now no longer unanimously accepted, and through access to electronic gadgets- in particular satellite mobile phones to the unsteady hands of the elites- discontent is welling up among the ruling elites, and a search for a new ideology is steadily underway. With South Korea continuing to make huge economic boundless leaps and with the North Koreans feeling they are economically back-pedaling far behind, the naked rivalry for power between the young radical reformers and the old, conservative hardliners is taking a new frightful turn which ultimately will obliterate the ruling clique as we know it.

The level of state sponsored corruption particularly within military ranks has eroded loyalty as socioeconomic stratification is snowballing in a manner that makes mockery of constitutional claims of building an egalitarian society. Powerful families jolted by the Thaek sudden execution may feel insecure and seek ways of liberating themselves from this draconian system which criminalizes freedom of expression and the rule of law!

The young ruler; Kim Il Un, has been busier consolidating power in his own hands via appointing younger generation to positions of military and political party power at the expense of the old guard which also feels threatened by the steadfast pace of internal generational reforms. All these internal reforms are leaving the ruling clique feeling the scissors and everyone is now bound to look up for themselves and become less dependent on the communist system to fend for their personal security.


The biggest Achilles Heel for the survival of this reclusive regime is over-militarization of her economy has left little resources for civilian use and in particular agriculture. More than a third of population is either underfed or malnourished while a tiny at the top end of the population is enjoying the national cake! The distribution of foodstuffs has polarized the nation in a manner that where a rural uprising of the 1990s which Thaek and his wife had brutally quelled is unlikely to repeat itself but the unthinkable military putsch is quietly in the offing because the national cake is getting thinner and thinner, and is proving insufficient to keep the ruling class at ease with itself.


With market forces of supply and demand re-establishing black-market as a major way of doing business, the ability of the ruling clique to control the distribution and access of vital goods and services for human survival is growing weaker and weaker by the day with electronic gadgets now illegally accessible to the middle class who can now witness firsthand information beyond what the state controlled media is willing to divulge. The control of access to information has been the most successful tool to mould and shape peoples expectations, attitudes and perceptions necessary in either agitating or dulling the momentum for social change. A now well-informed middle class- a gratitude to satellite phones- perceive the hypocrisy of communism is impeding their personal and even societal at large development catalyzing the discordance and disquiet among them which in few years ahead some young military brass will capitalize and end the senseless carnage of humanity there.


No sooner the young military junta takes over power, the purge will initially be brutal because of the complex nature of system of affection that cohesively glue the regime intact there, will demand substantial force to subdue and crush it, and the end of artificially state controlled economy will also be swift, elaborate and completethen, the world bereft of nuclear weapons within the Korean peninsular will definitely be a better and safer place to live for all of us