The U.S. military — including its brand-new Space Force — has no plans to shoot down the out-of-control Chinese rocket core that’s expected to crash somewhere on Earth this weekend, according to Defense Secretary Lloyd Austin.

© STR/AFP via Getty Images A Long March 5B rocket, carrying China's Tianhe space station core module, lifts off from the Wenchang Space Launch Center in southern China's Hainan province on April 29, 2021.
Austin said on Thursday that the U.S. will not intervene to stop the 21-tonne, 30-metre-long piece of space debris, despite the long-shot risk that it might crash into an inhabited area somewhere on the planet. The exact crash point will not be known until a few hours before it hits.
"We have the capability to do a lot of things, but we don't have a plan to shoot it down as we speak," Austin told reporters. "We're hopeful that it will land in a place where it won't harm anyone — hopefully in the ocean or someplace like that."
Read more: Huge Chinese rocket core falling ‘out of control’ back to Earth
The rocket core is the largest leftover from China's Long March 5B rocket, which carried part of a space station into orbit on April 29.
Rocket cores are typically designed to fall back to Earth and into the ocean shortly after delivering their payloads. However, the used-up Long March 5B rocket core accidentally entered temporary orbit, where it has been whipping around the planet while falling on a chaotic path ever since.
Observers say the core could fall almost anywhere on Earth, and that it could leave a swath of destruction akin to a small plane crash if it does hit land. However, there is a much higher chance that it will fall into the water that covers roughly 71 per cent of the Earth's surface.
Read more: Massive ‘space hurricane’ discovered swirling over the North Pole
Tracking data for the object, dubbed CZ-5B, shows it was circling the globe at 27,900 km/h on Friday morning, at an altitude of about 230 km.
The rocket core has been falling 10-15 km per day, and rough projections suggest it will come down late Saturday or sometime on Sunday.
The non-profit Aerospace Corp. predicted on Thursday that the core will fall in northeast Africa on Sunday, though it's "still too early to determine a meaningful debris footprint." That prediction had shifted since Wednesday, when the core was expected to fall near the west coast of Australia.
Nevertheless, Aerospace Corp. says the rocket could come down as far north as the Great Lakes in North America, and as far south as the southernmost tip of Australia.

U.S. Space Command and Roscosmos, Russia's space agency, say they are tracking the core as it falls. Russia does not expect the rocket core to affect its territory.
Chinese officials said Friday that the core will mostly burn up on reentry and that it poses little threat to people and buildings on the ground.
This is the second time that China has used its Long March 5B rocket and the second time that the rocket's main core has entered orbit before making an uncontrolled re-entry.
The first rocket core came crashing down to Earth last May and ended up plowing into an inhabited area of the Ivory Coast, where villagers found a 12-metre metal pipe intact after the crash. There were no injuries reported at the time.

It's extremely rare for anything over 10 tonnes to make an uncontrolled re-entry over Earth, according to Harvard University astrophysicist Jonathan McDowell. He points out that most large rocket cores are designed to do a deorbital burn that will knock them out of the sky, but that hasn't been the case with China's "reckless" Long March 5B rockets.
"I think it's negligent of them," McDowell told the New York Times. "I think it's irresponsible."
White House press secretary Jen Psaki on Wednesday said the U.S. is committed to working with the international community to promote "leadership and responsible space behaviours."


Defense Secretary Austin also stressed the importance of taking a "safe and thoughtful" approach to space.
Most space-faring nations have successfully designed their equipment to fall out of orbit, according to Ted Muelhaupt, head of the Aerospace Center for Orbital and Re-Entry Studies.
"It's something that the world as a whole has moved to because we need to," he told the Times.
He added that China's falling rocket core could scatter about 10 tonnes of debris over hundreds of kilometres.
"Think about three pickup trucks' worth of debris," he said.
China also allowed its first space station, the Tiangong-1, to fall back to Earth in an uncontrolled re-entry in 2018. The space station ended up crashing into the Pacific Ocean.
Video: Chinese space lab mostly burns up on re-entry in south Pacific
Floating debris and satellites have become a growing problem for human operations in orbit, and some nations have already started to prepare themselves for conflict in that arena. Former U.S. president Donald Trump founded a fifth branch of the U.S. military, the Space Force, to deal with such threats, while China has been testing ways to shoot down satellites or effectively punch them out of orbit with its own craft.
Video: Strange lights seen in skies over B.C., Washington and Oregon likely debris from SpaceX rocket
China's state-run Global Times dismissed the threat of the falling rocket earlier this week, calling it "Western hype" about the "China threat."
China plans to launch 11 more rocket missions by the end of next year in order to build its Tianhe (Heavenly Harmony) space station. It's unclear if they will tweak the Long March 5B rocket design to prevent more accidental orbits in the future.

"We're hopeful that it will land in a place where it won't harm anyone — hopefully in the ocean or someplace like that."

The latest prediction by the US military, which is tracking the rocket segment, is not encouraging, according to CNN. The US military has predicted that the debris will fall in Turkmenistan in Central Asia around 7pm Eastern Time on Saturday (4.30am IST on Sunday), per CNN. 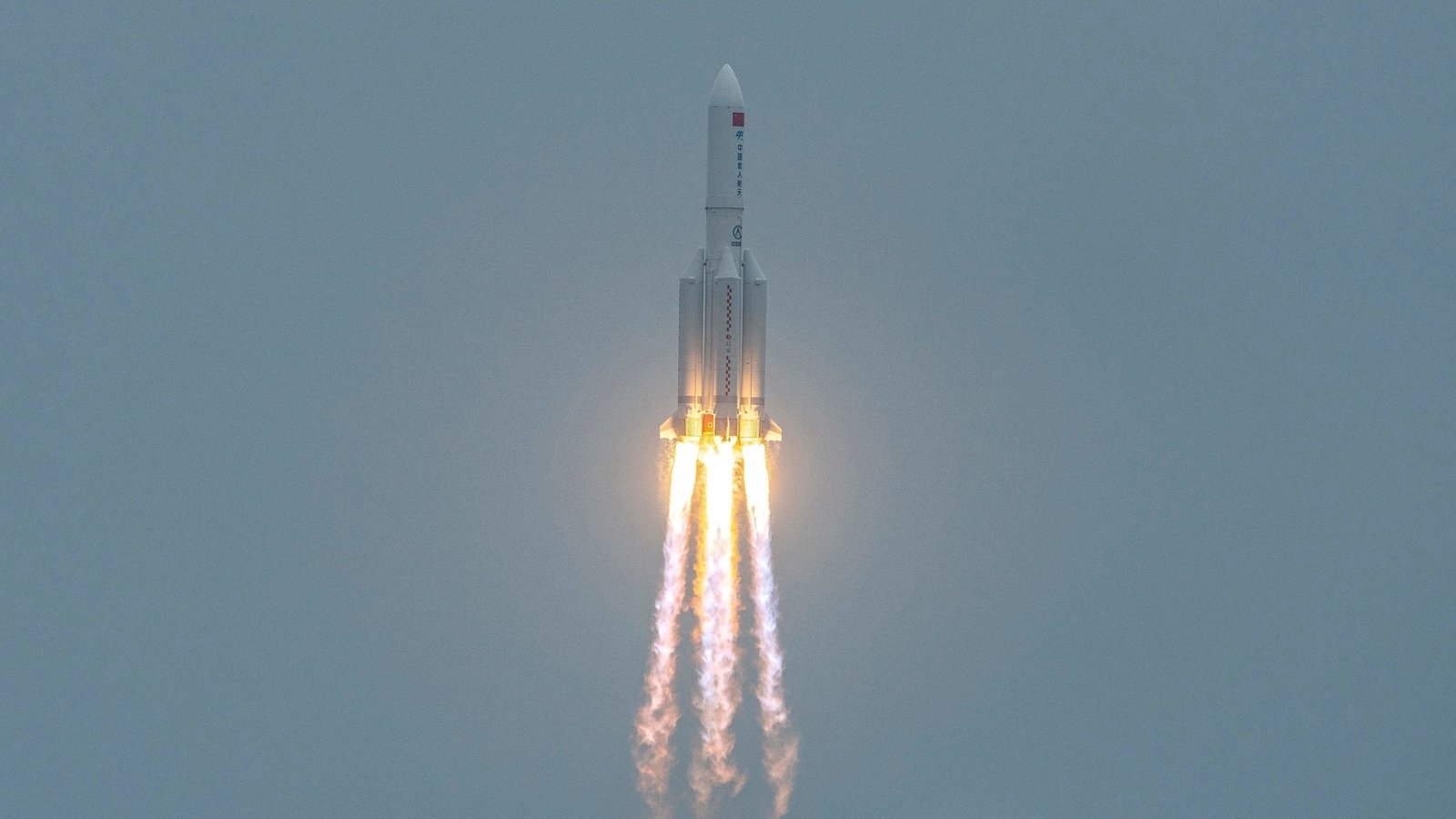 US military predicts time, place of Chinese rocket debris crash: Report | All you need to know

let the caged bird sings said:
"We're hopeful that it will land in a place where it won't harm anyone — hopefully in the ocean or someplace like that."

Russia Military base in Mozambique
2 3