​
[h=3]By JULIAN E. BARNES[/h]WASHINGTONThe U.S. military is deploying a new force of armed drones to eastern Africa in an escalation of its campaign to strike militant targets in the region and expand intelligence on extremists, officials said.
The military has reopened a base for the unmanned aircraft on the island nation of Seychelles to intensify attacks on al Qaeda affiliates, particularly in Somalia, defense officials told The Wall Street Journal.
The U.S. has used the Seychelles base for flying surveillance drones, and for the first time will fly armed MQ-9 Reapers from the Indian Ocean site, supplementing strikes from a U.S. drone base in Djibouti. 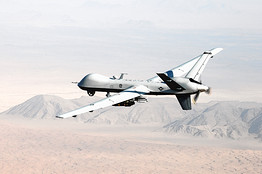 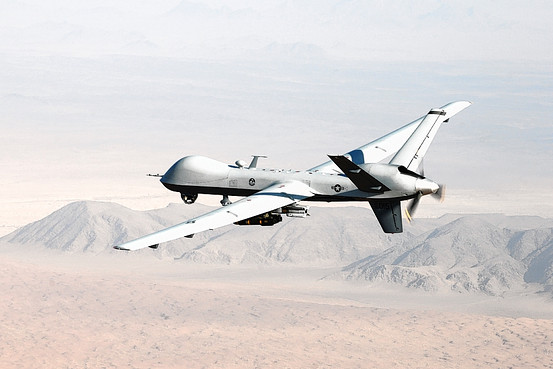 The move comes as Defense Secretary Leon Panetta and other officials have stressed a need to urgently follow up on the killing of al Qaeda leader Osama bin Laden in May with operations to destroy his terrorist organization.
U.S. officials say they are concerned that al Qaedaunder pressure from U.S. operations in Pakistanis moving to expand operations through its affiliates in East Africa, and that a new charismatic militant leader could emerge there.
Stepped-up surveillance on the militant groups is needed to help keep al Qaeda affiliates in check, officials said.
"We do not know enough about the leaders of the al Qaeda affiliates in Africa," said a senior U.S. official. "Is there a guy out there saying, 'I am the future of al Qaeda'? Who is the next Osama bin Laden?"
The U.S. military has long operated a base in Djibouti, in the Horn of Africa, and has already used drones against militants in Somalia. 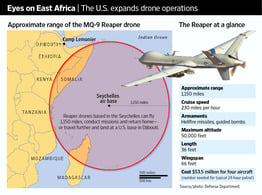 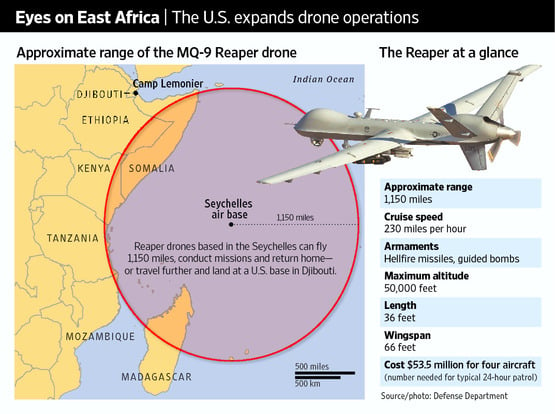 The new Seychelles base, with the Reaper deployment, will allow for more flights and improved operational security, giving the military a better chance at uncovering and destroying al Qaeda training camps in East Africa, officials said. Militants can sometimes spot and track drones that fly over land from the base at Camp Lemonier in Djiboutisomething that will be more difficult at an island base.
The Seychelles' capital, Victoria, is about 920 miles east of the southern tip Somalia, and about 650 miles northeast of Madagascar. The new base will help increase surveillance of pirates operating in the waters off Somalia. A senior defense official said the U.S. hasn't yet used the Reapers deployed the Seychelles to conduct armed reconnaissance on pirate ships, but the option is open to use the drones to strike at pirates who have mounted attacks.
"If there was a piracy situation gone wrong, the Seychelles are a good place from which to put something overhead," said the senior defense official.
The U.S. stationed Reaper drones in the Seychelles from September 2009 until this past spring, when they were withdrawn. Those aircraft weren't armed and were used only for surveillance. Officials said at the time that those drones were to be used to monitor pirates.
The new MQ-9 Reapers deployed to the Seychelles, officials said, can be configured for both reconnaissance and strike missions. The Reapers can fire Hellfire missiles, as well as guided 500-pound bombs. 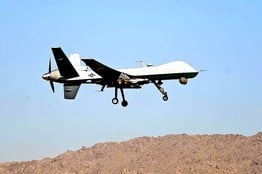 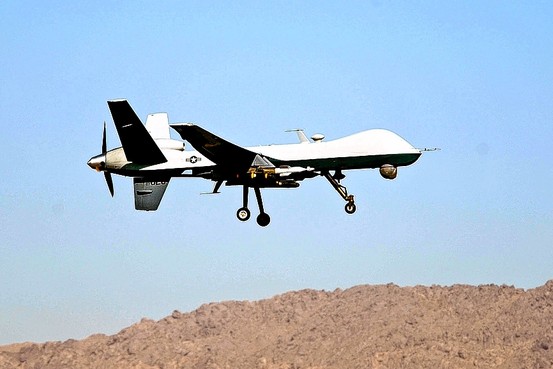 Agence France-Presse/Getty ImagesThe U.S. is stationing MQ-9 Reaper drones, like the one shown here, in the Seychelles to target militants in the region.

A Reaper can fly 1,150 miles from base, conduct missions and return home, military officials said. The time a drone can stay aloft depends on how heavily armed it is.
The MQ-9s are operated by the Air Force from Creech Air Force Base in Nevada and Holloman Air Force Base in New Mexico. An Air Force team on the ground in the Seychelles launches and lands the drones as they start and finish their missions.
Officials declined to specify what countries could be reached from the Seychelles base. However, based on the official range, an aircraft could conduct missions in Somalia and other countries in eastern Africa. A Reaper could also likely reach Yemen, if it were to land in Djibouti rather than return to the Seychelles.
It would also be able to fly widely over the Indian Ocean to hunt for pirates. "It gives us reach into different areas," the senior defense official said.
The Central Intelligence Agency operates the U.S.'s best known drone campaign against militants in Pakistan. Drone strikes in Yemen, Somalia and elsewhere in Africa are currently conducted by the U.S. military.
Abdiweli Mohamed Ali, the prime minister of Somalia, said he didn't object to U.S.-run drones targeting members of al Shabaab, an Islamic militant group with links to al Qaeda, inside Somalia. But he said he expects to be consulted and have such operations coordinated with his government.
"One less Shabaab is better for Somalia," said the prime minister, who was appointed in June, in an interview in New York where he was attending the United Nations annual meetings. "We have the same goal and that is to eliminate this extremist threat, first in Somalia and then the rest of the world."
He said he would object, however, to the drones killing Somali pirates. "That's a different issue," he said. "These are just disillusioned youths who need an alternative livelihood."
Ronald Jumeau, the Seychelles ambassador to the U.S., said in an interview that his country welcomes the presence of the Reapers. "For the U.S. to base such military materiel in our country, it shows trust on the side of the United States," he said.
There are some reservations in the Seychelles that hosting armed drones could make the island nation a target for attacks by militant groups in Somalia.
But Mr. Jumeau said there is widespread hope that the presence of Reapers could help deter pirate attacks in the region. He added that people in the Seychelles would support strikes against pirate vessels.
Pirates regularly attack ships headed for the Seychelles. As the piracy threat has increased, tourism has suffered in the Seychelles, shaving some 4% from the country's gross domestic product, Mr. Jumeau said.
"We will take help from everyone and anyone on piracy," he said. "For us, piracy is a question of territorial integrity."
U.S. officials believe al Qaeda affiliates in Africa are increasingly working together, sharing bomb-making techniques and fighters. With the senior leadership of al Qaeda in Pakistan under pressure, defense officials believe the terror group's affiliates in Yemen and Africa will pose a greater threat.
Gen. Carter Ham, the commander of U.S. Africa Command, said he has seen ties between al Shabaab in Somalia, al Qaeda in the Islamic Maghreb in North Africa, and Boko Haram in northern Nigeria.
The groups, he said, mostly work regionally, but pose a threat to the U.S. "The regional affiliates may be gaining in the threats they pose," Gen. Ham said. "We have to find a way to keep pressure on these smaller and more regionally focused organizations."

Not bad but it would be better if they dont use Kenya for these stupid dangerous activities.
S

One world government in the making!- The stratergy is, make hell to the people, through wars, diseases, famine(controlling process of crops and markets ), then the people themselves will cry for something that will give them peace and prosperity , at the end when they'll be sold an idea of one world government with the anti-christ at the helm, some will say it doesn't matter!!.
America empire is the reincarnation of the babylonian empire, watchout guys!
T

Gamba la Nyoka said:
One world government in the making!- The stratergy is, make hell to the people, through wars, diseases, famine(controlling process of crops and markets ), then the people themselves will cry for something that will give them peace and prosperity , at the end when they'll be sold an idea of one world government with the anti-christ at the helm, some will say it doesn't matter!!.
America empire is the reincarnation of the babylonian empire, watchout guys!
Click to expand...

..It feels good to be powerful!
N

Wanasema "U.S. officials "believe al Qaeda affiliates in Africa are increasingly working together, sharing bomb-making techniques and fighters. With the senior leadership of al Qaeda in Pakistan under pressure, defense officials believe the terror group's affiliates in Yemen and Africa will pose a greater threat.Gen. Carter Ham, the commander of U.S. Africa Command, said he has seen ties between al Shabaab in Somalia, al Qaeda in the Islamic Maghreb in North Africa, and Boko Haram in northern Nigeria.

Somali (militants in key port) 'attacked by US drones'
The United States has launched a series of attacks by unmanned drones on the Somali Islamist group al-Shabab, local residents say.