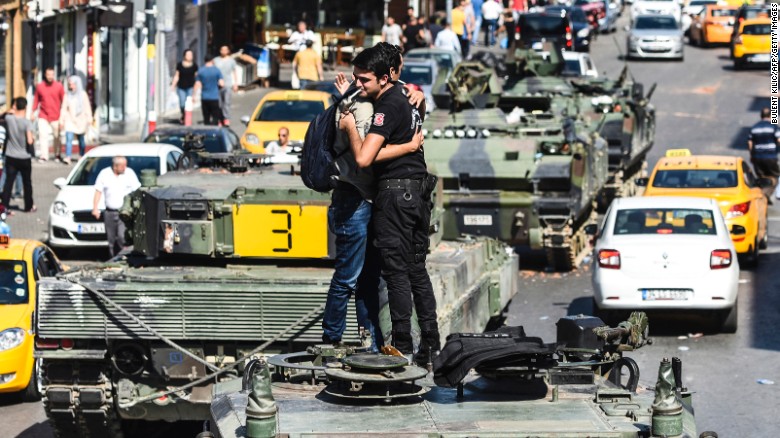 Declaring his government firmly in control, a defiant Turkish President Recep Tayyip Erdogan on Saturday demanded the United States arrest or extradite an exiled Islamic cleric he blames for a coup attempt that ended with nearly 200 people dead.

The cleric, Fethullah Gulen, living in self-imposed exile in Pennsylvania, suggested that overthrow and assassination attempts have been staged in the past though he did not directly accuse Erdogan of deliberately plunging Turkey into chaos.

The upheaval exposes deep discontent within the military ranks. But less than 24 hours after a night of violence, questions remained about who was behind it and why they decided to act now.

The ramifications of the coup attempt on the political system of a NATO ally and partner in the U.S. fight against ISIS also remain unclear.

Erdogan's call for U.S. involvement in punishing his rival comes after Turkish authorities closed the airspace around Turkey's Incirlik Air Base, where his government allows the American military to launch operations in the air campaign against ISIS in Syria and Iraq.

"This country suffered a lot in the hands of the Gulen Movement," Erdogan told throngs of supporters near his home in Istanbul.

"I call on the United States and President Barack Obama ... (to) either arrest Fethullah Gulen or return him to Turkey," he added. "If we are strategic partners or model partners, do what is necessary."

Turkey has more loads of her internal problems than external ones.
Issues of Kurds sovereignty and integration into the Turkey Government is a thorn in a flesh which do not require foreign nations interventions besides her own wisdom on how to off load the problems currently on her back.
No witch hunting.

Dah marekani tena
You must log in or register to reply here.