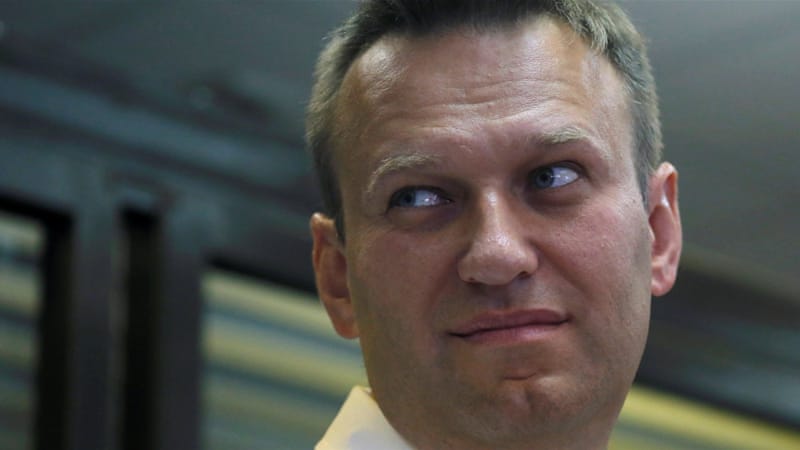 Navalny had called on his supporters to mark the Russia Day holiday with protests against corruption [File:Reuters]
Police have detained Russian opposition leader Alexei Navalny just before a mass protest against corruption in central Moscow was expected to take place.

He was arrested at the entrance of his home on Monday, his wife wrote on his Twitter account, posting a photo of him getting into a police car.

"Hello. This is Yulia Navalnaya ... Alexei has been detained in the stairwell," she wrote about a half-hour before the demonstration was to begin.

The protest will still go ahead, she added.
Navalny had called on his supporters to mark the Russia Day holiday on Monday with protests against what he called a corrupt system of rule overseen by Russian President Vladimir Putin.

Authorities in Moscow had agreed to a location away from the city centre, but Navalny called for it to be moved to Tverskaya Street, a thoroughfare that had been turned into a pedestrian zone for a Russia Day festival.

Navalny said late on Sunday that contractors hired to build a stage at the agreed-upon venue could not do their work after authorities pressured firms into refusing to supply him and his allies with sound and video equipment.

After the change, Moscow police warned that "any provocative actions from the protesters' side will be considered a threat to public order and will be immediately suppressed".

Reuters news agency reported that police arrested small numbers of protesters as they were exiting a metro station, at the same time as Navalny was detained. Navalny's website reported on Monday that protests were held in more than a half-dozen cities in the Far East, including the major Pacific ports of Vladivostok and Khabarovsk and in Siberia's Barnaul.

Photos on the website suggested turnouts of hundreds at the rallies.
Eleven demonstrators were arrested in Vladivostok, according to OVD-Info, a website that monitors political repressions.

More than 1,000 protesters were arrested at a similar rally March 26.

The protests in March took place in scores of cities across the country, the largest show of discontent in years. Navalny was jailed for 15 days after those protests.

The 41-year-old lawyer has announced his candidacy for the presidential election in 2018.

Navalny, a staunch Kremlin critic and anti-corruption campaigner, has long been the most visible opposition figure to Putin’s rule. In April, he suffered damage to one eye after an attacker doused his face with a green antiseptic liquid.

Am not your friend I am the president of Russia!
You must log in or register to reply here.