Pilot use of automation eyed in air crashes

By JOAN LOWY 17 hours ago 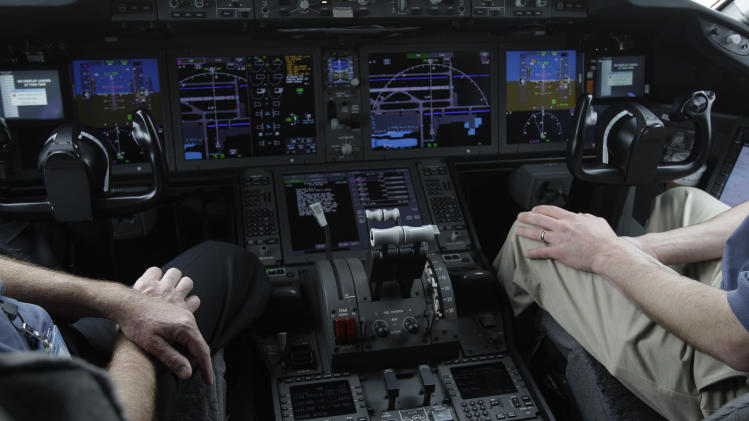 WASHINGTON (AP)  Pilots are becoming so reliant on computer systems that do most of the flying in today's airliners that on the rare occasions when something goes wrong, they're sometimes unprepared to take control, according to aviation safety experts and government and industry studies.
[h=2]Related Stories[/h]

Increasing automation has been a tremendous safety boon to aviation, contributing to historically low accident rates in the U.S. and many parts of the world.
But automation has changed the relationship between pilots and planes, presenting new challenges.
Pilots today typically use their "stick and rudder" flying skills only for brief minutes or even seconds during takeoffs and landings. Mostly, they manage computer systems that can fly planes more precisely and use less fuel than a human pilot can. But humans simply aren't wired to pay close and continual attention to systems that rarely fail or do something unexpected.
"Once you see you're not needed, you tune out," said Michael Barr, a former Air Force pilot and accident investigator who teaches aviation safety at the University of Southern California. "As long as everything goes OK, we're along for the ride. We're a piece of luggage."
The National Transportation Safety Board holds a two-day investigative hearing Dec. 10-11 on the crash of an Asiana Airlines jet that was flying too low and slow while trying to land at San Francisco International Airport last July.
View gallery."

aScottish Fire and Rescue services look on at the helicopter being lifted from the scene Monday, Dec

The plane struck a seawall just short of the runway, shearing off its tail and sending the rest of the airliner sliding and turning down the runway before breaking apart and catching fire. Three passengers were killed and scores of others injured.
The hearing will focus on "pilot awareness in a highly automated aircraft," the board said.
Investigators want to know how the three seasoned pilots allowed a passenger jet with no apparent mechanical problems in near-perfect weather conditions to lose speed so dramatically that it was on the brink of stalling moments before the crash.
The pilot flying the plane was attempting to land without use of the autopilot. Normally, the pilot in the second seat is supposed to have his eyes on the plane's computer screens to monitor airspeed and other readings, rather than looking out the window.
In this case, the second pilot was a training captain who was grading the performance of the pilot flying the plane. The training captain told investigators he thought the plane's autothrottle was maintaining engine power and thus speed, but discovered that wasn't the case just moments before the crash.
View gallery."

Rescue personnel work at the crash site of an ATR-72 turboprop plane, in Laos, near Pakse October 17

The autothrottle was "armed," or made ready for activation, investigators said in briefings after the accident, but they left open the question whether it was engaged and in idle or another mode.
Aircraft systems can have many modes, or settings, and perform quite differently depending upon the mode.
Pilot "mode awareness" is a more common automation-related problems showing up in accidents and incidents, according to an automation study released last month by the Federal Aviation Administration. Mode changes occur frequently during flight, often without any direct action by pilots. If pilots aren't continually paying close attention, they can lose track of which mode their systems are in.
Pilots also make mistakes when selecting modes. Mode selection errors were cited in 27 percent of the accidents reviewed in the FAA study.
Less than six weeks after the Asiana crash, a United Parcel Service cargo jet flying too low while trying to land in Birmingham, Ala., struck trees and then a power line before crashing into a hillside near the airport. Both pilots were killed.
View gallery."

In that case the autopilot was on, and seconds before the crash there was a loud automated warning that the plane was losing altitude too rapidly, according to investigators. The investigation is continuing, but some safety experts see a possible link between the two accidents.
"I think mode awareness is going to be very central in both investigations," said John Cox, an aviation safety consultant and former accident investigator for the Air Line Pilots Association. "In both cases the airplane appears to have been properly maintained, everybody is properly trained. A lot of the focus is on how the crew operated the airplane so that it ended up with the airplane short of the runway."
The Asiana accident was the first fatal crash of a passenger airline in the U.S. since a regional airline pilot lost control of his plane during a landing approach in Buffalo, N.Y., in February 2009. In that crash, investigators found the two pilots weren't closely monitoring airspeed and failed to notice when the speed began dropping rapidly.
The plane plummeted to the ground, killing all 49 people on board and a man in a house below.
There was nothing mechanically wrong with the plane, and the captain should have been able to regain control of the plane if he had responded correctly to an automated stall warning, investigators said. Such "loss of control" accidents accounted for 43 percent of fatal passenger airline and air cargo accidents over the five years that ended in December 2012, according to the International Air Transport Association, which represents carriers around the world.
Last month, the FAA issued new pilot training regulations calling for more attention to teaching pilots how to recover from stalls.