Nigerian senator hands herself in 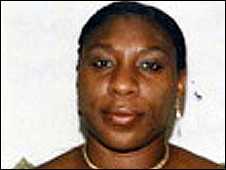 The daughter of Nigeria's former leader Olusegun Obasanjo has been jailed after handing herself in to a court looking into health ministry graft charges.

Iyabo Obasanjo-Bello has been in hiding for several weeks.

Mrs Obasanjo-Bello, a serving senator and chairwoman of the health committee, is accused of receiving a kick-back from the ministry.

She pleaded not guilty to the charges and was remanded in custody until her bail hearing on Wednesday.

The judge agreed she could be held in a police cell rather than in the custody of the Economic and Financial Crimes Commission investigating the allegations, after her lawyer said she had been threatened by EFCC agents.

She has said in the past she believes herself to be the victim of a "witch-hunt".

She refused to be interviewed by the EFCC, and told the media she had done nothing wrong.

She says the money was to pay for an official visit to Ghana for the committee, allowed under the Senate rules.

The accusations concern money left in the health budget at the end of last year.

President Umaru Yar'Adua had instructed all ministries to return unspent money to the central bank.

But former Health Minister Adenike Grange, and her minister of state Gabriel Aduku, are accused of writing cheques for fake contracts and handing out the money.

Mr Obasanjo, his family and associates have been the focus of several accusations since he left office.

His son-in-law Kenny Martins, the chairman of the Police Equipment Fund, has been interrogated by the EFCC about alleged fraud in his organisation.

Nasir el-Rufai, the former minister of the Federal Capital Territory, has been accused of seizing plots of land in the capital and giving them to Mr Obasanjo.

The former president himself has been implicated by a probe into the power sector that concluded his administration funnelled millions of dollars into fake companies.

An investigation into the oil industry, which Mr Obasanjo oversaw as minister for petroleum, has also begun.
You must log in or register to reply here.