Kenya was on Thursday, July 9, ranked among leading countries fostering tax reforms for economic growth in a global report on corporate taxation.

The report commissioned by the Organisation for Economic Co-operation and Development (OECD) singled out Kenya as one of the global jurisdictions with a generous accelerated depreciation corporate tax policy alongside Italy, Papua New Guinea and Cote D’Ivoire.

Of the 74 jurisdictions covered in the 2019 analysis, 57 provided accelerated depreciation, meaning that investments in the areas were subject to Effective Average Tax Rate (EATRs) below their statutory tax rates. 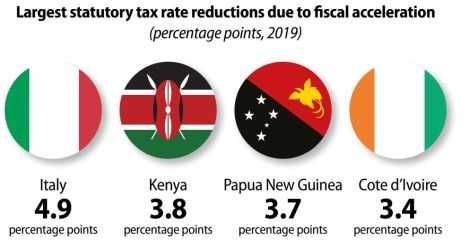 Good reforms and not just for MNE's, but for home grown businesses too and corporates in Kenya. Such policies spur growth locally while promoting investor confidence. The trickle effect is sustained economic growth for Kenya, jobs and new business opportunities for Kenyans. This only cements Kenya position as the place to be for business and its stature as the economic hub of E.& C. Africa.

Hehehe
You must log in or register to reply here.