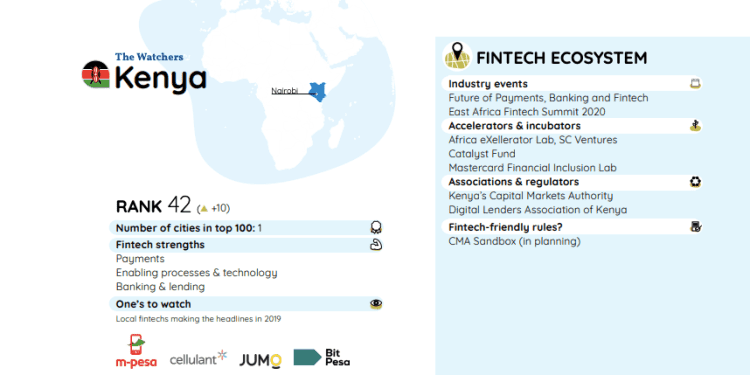 Kenya bagged 42nd position in the Global Fintech Ranking by Findexable. The country ranked second in Africa, just a few points behind South Africa which took the leading position. Global Fintech Index by Findexable recognized Kenya’s efforts in regulation, as well as hosting various incubators and events which foster the fintech ecosystem.

Kenya moved ten ranks in the startup rank this year, owing to the introduction of fintech friendly regulations. For instance, the CMA’s regulatory sandbox allows fintechs to test innovations in a control regulatory environment. Such a space enables fintechs to work closely with the regulator, noticing flaws in innovations at an early stage.

Additionally, Findexable named Kenya the first among ten countries to watch, thanks to local fintechs making headlines. This is thanks to growing entrepreneurial success and regulatory foresight. Kenya is home to several companies with notable innovations in lending and payments, as well as its enabling processes and technology. Some of the local success stories in the report include M-Pesa, Cellulant, Jumo, and Bitpesa.

The ranking also recognized Nairobi as a growing fintech hub. Findexable noted that the city is an emerging ecosystem, showing up to 20% of African fintechs. In Africa, Nairobi ranks as the second-largest fintech hub, behind South Africa’s Johannesburg.

“Nairobi is Africa’s second-largest fintech hub, with an estimated 20% of African fintechs. It is also an emerging ecosystem of local investors and VCs complemented by a steady rise of international investors and growing interest from global technology firms,” reads the Findexable Report.

Uchokozi kwa wakombozi wa Afrika.
You must log in or register to reply here.

Nairobi ranked as the city with the largest fintech ecosystem in Africa.....

Kenya is becoming a global hub of fintech innovation