Oldham, Coventry, Sheff Utd and Huddersfield are all through to the fourth round after upsetting Premier League sides. 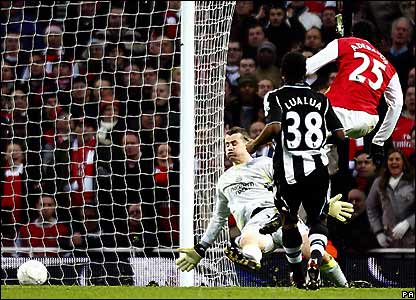 Arsenal 3-0 Newcastle: Two second-half goals from Emmanuel
Adebayor put the Gunners in control at The Emirates

The ties are scheduled to take place on 16 and 17 February.
R

The ties are scheduled to take place on 16 and 17 February.
Click to expand...

Ferdinand's cup for Gunners! Crunch time as Arsenal is plagued with injuries.

Liverpool are out beaten 2 - 1

The big one in minutes. Just about to start.


RAFA BENITEZ looks set for another inquisition about his rotation policy after seeing his Liverpool side dumped out of the FA Cup by lowly Barnsley.

Reds boss Benitez left skipper Steven Gerrard on the bench, while Javier Mascherano, Fernando Torres and Pepe Reina were all sat in the stands.

And the decision backfired badly when Stephen Foster cancelled out Dirk Kuyt's strike, before Brian Howard netted a dramatic late winner. Hero on the day was Tykes' keeper Luke Steele, who was making his debut after signing on an emergency loan from West Brom.

Steele made a string of top class saves with the score level, to set up the dramatic finish. Kuyt opened the scoring in the first half, ending a 13-game goal drought with a cool finish following good work by Ryan Babel.

That goal should have seen Liverpool cruise into the quarter-finals, but Barnsley didnt read the script. Barnsley drew level on 56 minutes, with Foster rising to head Martin Devaneys cross past reserve stopper Charles Itandje.

The goal spurred Benitez men into action, and Steele kept out a relentless barrage barrage of shots. And in the dying moments his stunning performance was rewarded, with Howard drilling a shot from the edge of the box to stun the Kop into silence.

Fletcher adds the second one after a mistake by Fabregas.

Its all over Manu 3 Arsenal 0.

Ole said:
Its all over Manu 3 Arsenal 0.

Ole said:
Its all over Manu 3 Arsenal 0.

Eboe red card at the start of second half.

nne bila ndugu watazamaji....fletcher tena....na badoooo
You must log in or register to reply here.