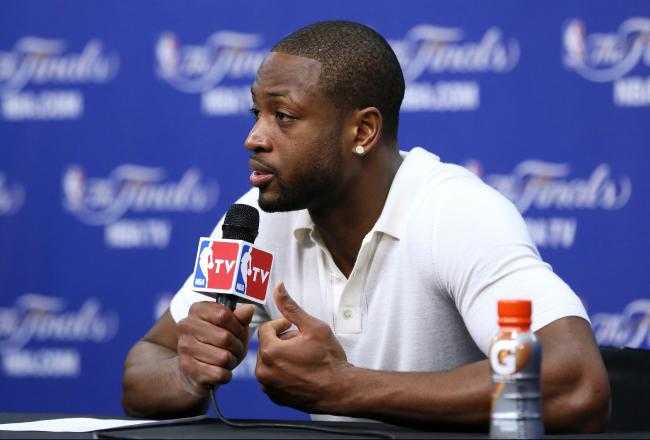 USA Today
DENVER  Dwyane Wade long ago ceased being just a basketball player.
He's a celebrity now, a status he's largely welcomed even as it has come with a downside: His personal life often makes the gossip pages. It certainly did Monday, with a series of Internet reports naming him as the father of a child born to a woman other than his fiancee Gabrielle Union.
Wade addressed the situation prior to playing Monday against the Nuggets, essentially confirming what had been widely written.
Yes, he has a month-old son.
"I'm in the public eye, so obviously it's a part of it, it comes with the territory," he said. "But you know, as I've always done my whole life, I always try to focus on what's most important to me and my family. And that's being a great father.
"I've always tried to show my importance in my kids' lives, and it doesn't change now. Me and my lady and my family have continued to move forward, and that's evident by her accepting the ring and the proposal that I gave her."
Union accepted the proposal on Dec. 21 in Miami, with Wade's sons Zaire and Zionborn during his marriage to Siohvaughn Funchesplaying a part. Wade and Funches divorced this summer after a very public breakup and custody battle.
He began dating Union in 2009, and they have been on and off since. In September, on The Tonight Show with Jay Leno, Wade publicly revealed that he and Union had experienced and gotten through a rough patch.
"But yeah, in our time apart, in our break, in our pain and our hurt, a blessing came out of it in my life," Wade said. "You know, having a son that's born healthy. So, moving on."
Wade has spent time with the baby, whose name he preferred not to reveal at this time.
"You know me, (I'm) involved with my kids' lives," Wade said. "When my kids lived at home with me, weren't living at home with me, I tried to do everything I could to see them. Obviously, I got custody of them for different reasons, but nothing changes in my life. And as I said, this is something that my family knows, and this is something that me and my now-fiancee worked through when we got back together and understood that we wanted to continue our lives together, and continue supporting our family. And I'm going to do that. That's what I've always done."