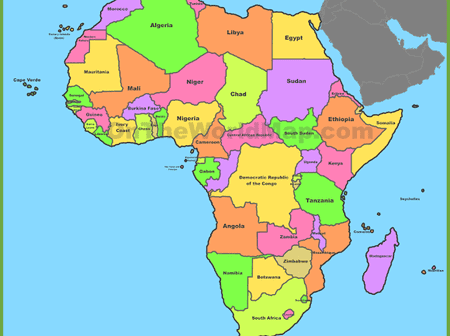 There’s one dark secret about Africa that I wish more people knew about.
Ignorance about Africa is causing wilderness areas to be lost. Tourism and conservation is at risk of being replaced by mining and logging and development.

Last month, a safari camp in Selous Game Reserve in Tanzania had to announce its impending closure because a logging company was given the right to strip the area of its natural forest, to make way for a dam and hydropower plant.
Why is this allowed to happen?

Because tourism doesn’t pay the bills. As a tourism and conservation destination, the reserve doesn’t generate much revenue.
And tourism is limited because of fear and ignorance.
Africa has a reputation as being an unsafe destination. Take a look at this map allegedly showing the world’s most dangerous travel destinations, based on UK Foreign Office warnings:
Many of the world’s most dangerous countries from a tourist perspective are in North Africa and the Middle East.
Because of this, Africa has a reputation as being unsafe to visit.
But Africa is not a country.
Africa is a vast continent with 54 different countries, each with a different risk profile.
And the whole of Southern Africa and East Africa (an area roughly the size of the United States) is perfectly safe to visit for a tourist. So are the coastal regions of West Africa. (See the green areas on the map).
Many potential tourists stay away because of the perception that “Africa is unsafe” and because they’re unaware how safe it is to travel to Southern Africa, East Africa and parts of West Africa. They see Africa is one big, dark, scary continent, infested with crime and disease and poverty.
So they stay away. If more people knew how safe it was to visit, there would be far more tourists, more flights, more investment. Increased tourism would help grow the economies of these regions, and provide greater protection for the remaining wildlife populations and game reserves of the region. Conservation would be more profitable, economically. Eco-tourism revenue would provide an incentive to limit the destruction of natural wilderness areas for other industries like mining or logging.
The dark secret is this: Ignorance and fear is killing Africa’s wildlife and threatening its wilderness areas.
And the secret that should not be a secret is this: Many parts of Africa are absolutely safe to visit, and stunningly beautiful. Do yourself a favour and visit Africa
You must log in or register to reply here.