By LYDIA POLGREEN
Published: October 4, 2011
NEW DELHI - The Dalai Lama has canceled his plans to attend an 80th birthday celebration for South Africa's Archbishop Desmond M. Tutu after failing to receive a visa to visit South Africa, his office here said in a statement on Tuesday.

The exiled spiritual leader of Tibet was expected to leave for South Africa on Thursday to celebrate with Archbishop Tutu, a fellow Nobel Peace Prize laureate, and many other global luminaries.

Officials from the government of Tibet in exile, which is based in India, applied for visas for the Dalai Lama and others traveling with him in late August and dropped off their passports on Sept. 20. But as of Tuesday, no visas had been issued.

"For whatever reason or reasons, the South African government finds it inconvenient to issue a visa to His Holiness the Dalai Lama," the statement said.

Many have accused South Africa of buckling to pressure from China, a close ally that accuses the Dalai Lama of trying to split Tibet from China and create an independent state. The Dalai Lama has said he does not favor independence but has criticized what he calls Chinese repression of Tibet's religious and cultural traditions.

The South African Embassy in New Delhi did not immediately respond to a request for comment about the visa.

"Even though China is our biggest trading partner, we should not exchange our morality for dollars or yuan," the news agency quoted Tony Ehrenreich, a Cosatu leader, as saying.

from eastern colonosation to western colonisation, bila half time! 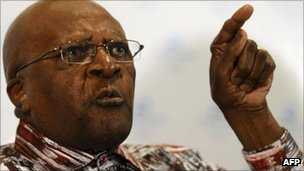 South Africa's ruling ANC has rejected Archbishop Desmond Tutu's assertion that the party was "worse than the apartheid government".

The Nobel Peace laureate's remarks came after the Dalai Lama cancelled a trip to South Africa as the government had failed to grant him a visa on time.

Tibet's spiritual leader had been due to take part in celebrations on Friday to mark the archbishop's 80th birthday.

"We are appealing to the archbishop to calm down," the ANC statement said. Pretoria has maintained that it did not come under pressure from China to stop the visit.

Angry warning
But during a nationally televised news conference, Archbishop Tutu said its actions were those expected of the apartheid government. He accused the African National Congress of abusing its power, saying this would one day lead to a revolt.

"I am warning you, one day we will start praying for the defeat of the ANC," he said. 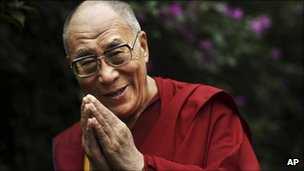 China views the Dalai Lama as a dangerous "splittist"

It said the archbishop's comparisons of the ANC to the apartheid regime, Egypt's deposed leader Hosni Mubarak and former Libyan leader Muammar Gaddafi were "very unfortunate and totally misplaced".

BBC
You must log in or register to reply here.