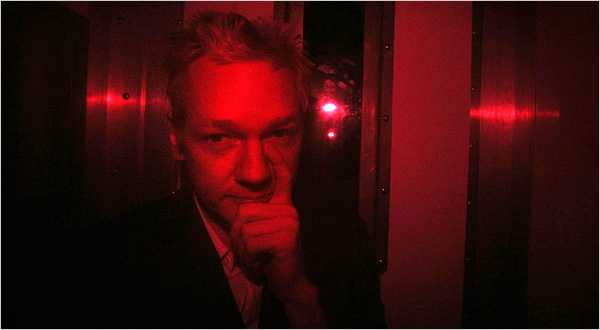 Peter Macdiarmid/Getty Images
The Wikileaks founder Julian Assange arrived at court inside a prison van with heavily tinted windows on Tuesday in London.

By RAVI SOMAIYA and ALAN COWELL

LONDON  After a week in detention facing possible extradition, Julian Assange, the founder of the WikiLeaks anti-secrecy group, was released on $310,000 bail by a court on Tuesday as he challenges a Swedish prosecutors demand for his extradition to face questioning about alleged sex offenses.

Protesters demonstrated outside the City of Westminster Magistrates Court where Julian Assange attended a bail hearing on Tuesday.


Judge Howard Riddle ordered that Mr. Assange appear again in court on Jan. 11. He also said that, between then and now he must reside at Ellingham Hall, a Georgian mansion in Bungay, eastern England, owned by Vaughan Smith, the founder of the Frontline Club, which is used mainly by journalists. Mr. Assange must spend every night at the mansion and will be electronically tagged so that police can track his movements, the judge said.
Additionally, he will be under curfew between 10 p.m. and 2 a.m. and between 10 a.m. and 2 p.m. every day and will be required to report daily to the police between 6 p.m. and 8 p.m.. His passport is already with the police and, under the terms of his bail, he is not permitted to try to travel abroad.
A British lawyer acting for Swedish authorities had opposed bail saying nothing had changed since it was denied one week ago.
The case has generated enormous international interest with figures in the Obama administration weighing whether to prosecute him, critics vilifying him and supporters depicting him as a hero and martyr. Crowds of media crews and reporters built up around the court near Parliament early on Tuesday, mingling with Mr. Assanges followers.
An Australian newspaper, the Sunshine Coast News, reported on Tuesday that his mother, Christine Assange, had flown to London to be with him.
In a 10-minute telephone conversation with his mother, the newspaper said, Mr. Assange declared: My convictions are unfaltering. I remain true to the ideals I have always expressed. These circumstances shall not shake them. If anything, this process has increased my determination that they are true and correct. Mrs. Assange was among around 100 people  mainly lawyers and journalists  crammed into Court No. 1 at City of Westminster Magistrates Court for her sons arrival. Mr. Assange arrived in the court building several hours before the afternoon hearing, according to reporters at the court house.
The legal wrangle over Mr. Assanges future erupted after WikiLeaks posted troves of classified American documents on the Internet, the most recent of them drawn from some 250,000 diplomatic cables between the State Department in Washington and American missions abroad.
While Mr. Assange has ascribed the sex offenses  which he denies  to dirty tricks related to his antisecrecy operations, Swedish prosecutors insist there is no link. A week ago, Mr. Assange surrendered to British authorities and was jailed after a judge reviewing the extradition request found him to be a flight risk and denied bail.
Despite his release Tuesday, a final decision on whether he is extradited could take weeks or longer.
Speaking about the case in recent weeks, Mr. Assange has said that he had consensual relations with two young Swedish women, whom he met during a trip to Sweden in August that he made in a bid to establish a haven for himself and WikiLeaks under Swedens broad press freedoms.
The charges relate to the question of whether these encounters ceased to be consensual when a condom was no longer being used. Swedens request for extradition is designed to enable prosecutors to question Mr. Assange about charges of rape, sexual molestation and unlawful coercion.
The latest twist in the drama began a week ago when officers from Scotland Yard arrested Mr. Assange after he went to a central London police station by agreement with the authorities.
In a packed courtroom hearing lasting nearly an hour a week ago, Gemma Lindfield, a lawyer acting for the Swedish government, outlined some of the detailed allegations against Mr. Assange made by the Swedish women, both WikiLeaks volunteers. They involved three incidents , including one in which Mr. Assange was alleged to have had unprotected sex with one of his accusers as she was asleep.
In court last week, Mr. Assange refused to give a current address, giving first a post office box, then an address in Parkville in the Australian state of Victoria, where he lived before adopting a nomadic lifestyle since founding WikiLeaks in 2006.
The exchange appeared to have weighed against his request for bail, which was supported by financial guarantees of more than $150,000 from a cast of well-known supporters present in court, including the filmmaker Ken Loach and Jemima Khan, a socialite and political activist.
The judge, Howard Riddle, agreed with Ms. Lindfield that there were significant grounds for thinking Mr. Assange posed a flight risk, because of his nomadic lifestyle, his lack of ties in Britain, his network of international contacts and his access to substantial sums donated by WikiLeaks supporters.
His week of imprisonment has had little evident impact on the flow of leaked documents from an archive that was made available to five news organizations, including The New York Times. Neither does the flow seem to have been stemmed between what has been called cyber-warfare between supporters of WikiLeaks and several of its online contractual partners providing servers space, domain names and payment services for donation.
In the telephone conversation with his mother, Mr. Assange said: I am calling on the world to protect my work and my people from these illegal and immoral acts.
Many of the communications between the State Department and 274 overseas embassies and missions remain to be released.
According to WikiLeaks, only 1,344 of a total 251,287 documents have so far been published on its Web site since it began releasing the latest batch of documents on November 28. Previously the organization had publicized confidential material about the wars in Afghanistan and Iraq.
Ravi Somaiya reported from London, and Alan Cowell from Berlin.
You must log in or register to reply here.