Botswana in a froth over beer

Botswana in a froth over beer

Botswana's cabinet is expected to approve a drastic increase in the price of beer - a staggering 70% - when it meets later.

Drinkers would be hit hard by the new proposals

It is part of a crackdown on alcohol driven by Botswana's new President Seretse Khama Ian Khama.

As a committed Christian, he has a zealous dislike for the "evils of drink".

His father, Botswana's founding president Seretse Khama, died at the relatively young age of 59 of cancer and liver problems. He was known to be a heavy smoker and drinker.

Now his son is particularly concerned about alcoholism, which he says can result in ruined lives and misery for many.

It is a position that he set out at his inauguration speech on 1 April.

"Abuse of alcohol is one of the ills that we have to address as a nation," he told the thousands who had gathered for the event.

At a recent Kgotla - a traditional meeting place where national issues are debated - President Khama announced that a new alcohol tax would be introduced, which would raise prices by 70%.

He added that if the manner in which people drink and use alcohol does not improve in three months, there would be a further increase of 70%.

This is going to ruin our business

The government has recently appointed a task force to find ways of regulating shabeens - informal drinking bars - as well as traditional home brews.

In Botswana, alcohol abuse is blamed for various socials problems such as domestic violence, road accidents, juvenile delinquency and the spread of HIV/Aids.

The government has the backing of the Botswana Council of Churches, which has been sitting on a national committee looking at social values and morals.

"We have been worried by drinking patterns in Botswana," the organisation said in a statement, "which have resulted in families falling apart and domestic violence."

But the president's announcement that alcohol prices would go up did not go down well with beer-sellers and consumers alike who were feeling decidedly flat.

"Seventy percent is too much, " said Ludo, a young drinker at a bar in Gabarone.

It does not address alcohol abuse

"The president should accept that there are no recreational facilities and he should come up with alternatives."

"I am young and when I am done with university classes what will I do?" he asked.

"This is going to ruin our business," said Irene, who manages Linga Longa, a popular bar at the Riverwalk mall in the city.

"We have to buy from suppliers who will also increase their selling prices and we will have to do the same if we have to make profit. I do not see people coming to buy alcohol," she said.

While understanding the reasons for the price increase, the main brewery company in Botswana said this was not the right way to go about tackling alcoholism.

"We are talking to the government to make them understand the implication of the price hikes," Kgalagadi Breweries Limited said. 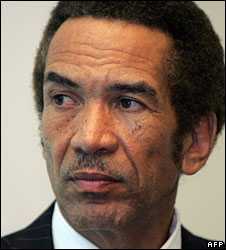 "We share the government's concern about the harmful effects of irresponsible consumption and abuse. But while the increase in prices may limit access by some people, it does not address the pertinent matter of alcohol abuse and associated effects."

The company believes people with drinking problems will just find a way around the barrier of higher prices, for example by resorting to dangerous home brews.

Many people in Botswana share their concern that the problem may be driven underground.

The increase in tax on alcohol is just one of the battles that sellers of liquor are having to fight with the government.

Recently it introduced a limit in trading hours - a measure some retailers and bar-owners challenged in court.

But they were not successful.

The court ruled that new hours, limiting sales from 1900 to midnight (instead of all day) would come into effect, when existing licences expired. It also banned bars and bottle stores from opening on Sundays and public holidays.

Botswana and beer have a long history together.

Drinking is an intrinsic part of social rituals such as weddings and funerals, as well as the traditional Letsema - where farm workers gather together to share a drink after toiling on the land.

Undoing such a bond may take more than simply increasing the cost of drinking.
You must log in or register to reply here.