Blue is the colour for schoolboy hot-shot

A TEENAGE football prodigy from Basingstoke is closer to realising his dream of playing the beautiful game professionally by signing for Premier League heavyweights Chelsea.
After producing a string of incredible performances in the local Peter Houseman Youth League, Adam Nditi, who lives in Hatch Warren, was snapped up by the London club.
The 13-year-old impressed club scouts, scoring an amazing 12 goals in just four games for Down Grange A in the Under-13 Premier League and soon penned a deal with the Champions League finalists.
And his achievement is made even more remarkable as the striker only arrived in Britain seven months ago, moving to Basingstoke to live with his father Eric Nditi after spending the early years of his life in Tanzania.
After settling in the town, Adam, who is a pupil at Bishop Challoner Catholic Secondary School, joined the Down Grange team, astounding the coaches with his skills and scoring eight goals in the first 14 minutes of his debut.
He was soon offered a 12-week trial at Chelsea and, despite joining late in the season, forced his way into the academy side there, bagging a brace on his debut against Southampton and scoring another against Arsenal at Stamford Bridge.
These performances clearly impressed the coaches at the Premier League club, as he was then offered the chance to sign for the academy.
He told The Gazette: "It feels good to have signed for Chelsea and is great both for me and my family.
"I have dreamt about being a professional footballer for a long time and it is a step closer now.
"I have worked very hard in training and with my dad to get better but it has all been worth it."
The youngster said he looks up to players like Diego Maradona and would like to be like him one day.
"My main strength is scoring goals but I have good skills as well," he explained.
Signing for Chelsea means that Adam will no longer be able to play for Down Grange but manager Nathan Chestney-Stagg is delighted to see him progress.
He said: "I am really pleased for him and very proud that a Basingstoke lad has been so successful.
"He is athletic and has a lot of agility. His balance and ball control is great and he has impressed a lot of people."
He added: "He has really lifted the other boys. He is very down to earth and humble, which is quite rare for a young man."
Proud father Eric said: "I am happy like any dad seeing his son doing good things. If he carries on in this way, then one day he might get to play like the people that he watches on television." 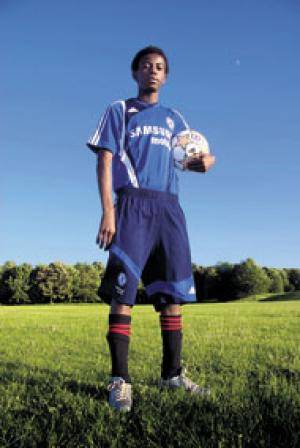 [FONT=verdana,geneva]Adam Nditi (Football) Adam is a very focused and dedicated footballer who has learnt that to achieve you have to work hard and not take anything for granted. He is proud to have had the opportunity to prove to Chelsea he is capable of going all the way in the sport he loves. Adam was selected to play in U15 matches for Chelsea Football Club 1st Team and played in the Northern Ireland milk Cup with Chelsea where he won the Team Player Award for the tournament.[/FONT]

I like the words " RISING STAR". All around me is falling stars especially the starts used to play in the first eleven team of Tanzanian politics. Probably he could change my thinking into becoming a little better.

Aisee
You must log in or register to reply here.

A story of LOVE, PAIN & TEARS | John-Pierre Adams a French footballer, who has been in a coma for almost 39 years