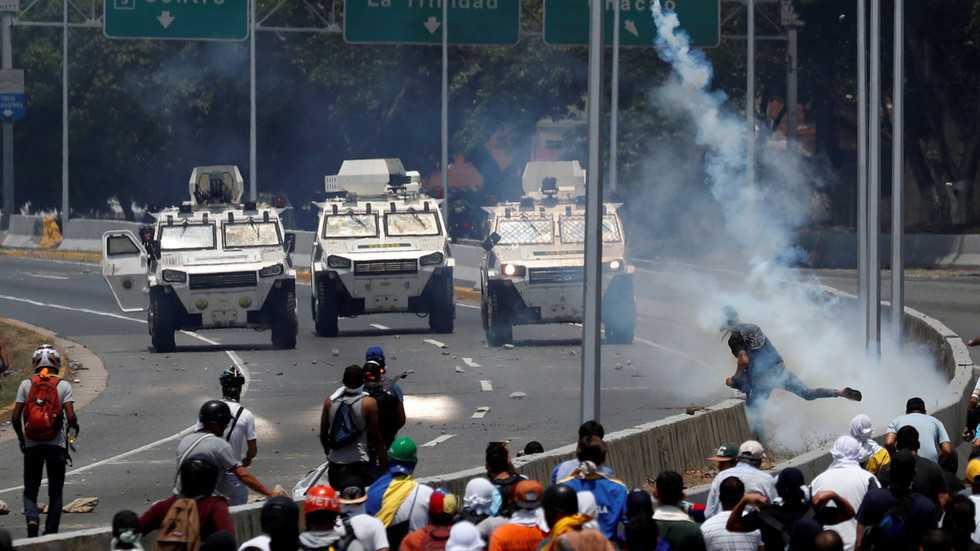 The media shouldn’t turn into a tool for forces seeking to escalate the situation in Venezuela by spreading fake news, the Russian Foreign Ministry said accusing the opposition of resorting to violence in the ongoing coup attempt. 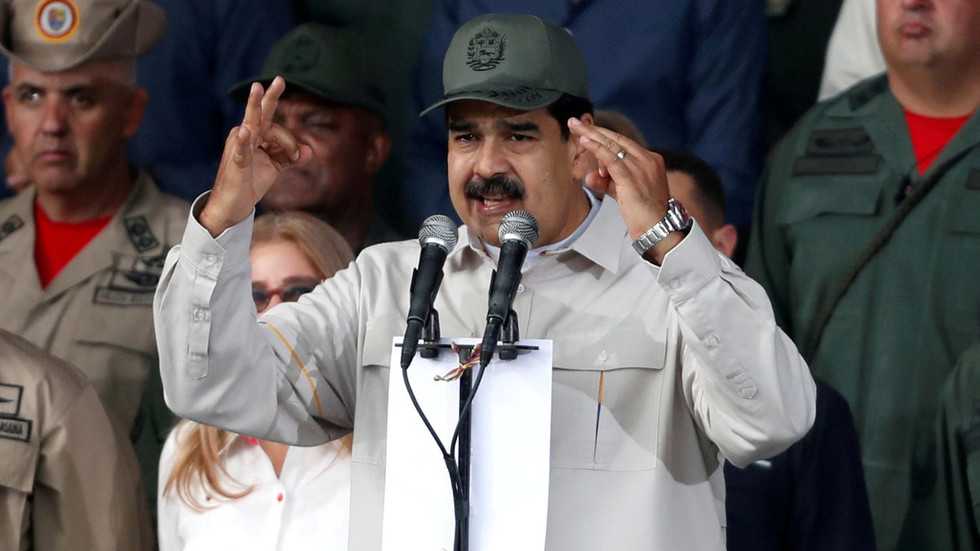 All military commanders of Venezuela are loyal to the government, President Nicolas Maduro assured amid an attempted military coup, declared by US-backed opposition leader Juan Guaido.

The media shouldn’t turn into a tool for forces seeking to escalate the situation in Venezuela by spreading fake news, the Russian Foreign Ministry said accusing the opposition of resorting to violence in the ongoing coup attempt.

All military commanders of Venezuela are loyal to the government, President Nicolas Maduro assured amid an attempted military coup, declared by US-backed opposition leader Juan Guaido. 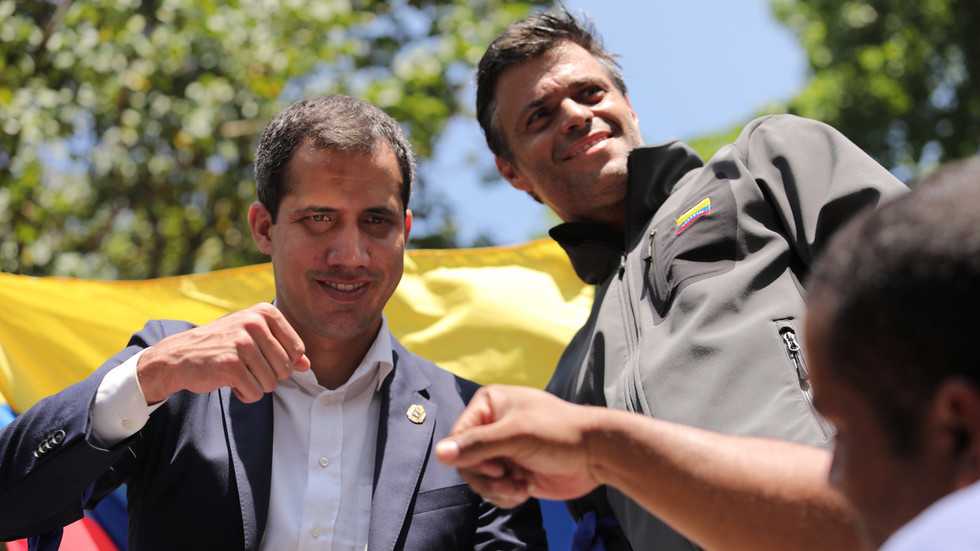 Venezuelan opposition figure Leopoldo Lopez has sought refuge in Chile’s embassy in Caracas, while at least 25 pro-Juan Guaido troops asked Brazil for refuge. The news all but points to the failure of the US-backed coup attempt.


Spain, the former colonial power in Venezuela and instrumental in setting the European Union line, said that, although it considered Guaido the legitimate leader of Venezuela, it did not support a military coup and wanted to see elections.
Click to expand...

(Bloomberg) -- It was a ploy that from its outset felt like a long shot. Before dawn Tuesday, Juan Guaido, flanked by his political mentor Leopoldo Lopez and a handful of soldiers who had broken ranks, issued a message to Venezuela and the world: The time to topple Nicolas Maduro’s authoritarian regime was right now.

By dusk, with Maduro still firmly in control of the military command, Lopez had sought refuge in the Chilean ambassador’s residence in Caracas and the streets were beginning to empty of the protesters who had heeded Guaido’s call to join what he called Operation Liberty.

While likely not a fatal blow to Guaido and the three-month-old push to unseat Maduro, it was certainly the biggest setback yet. And it raised crucial questions: Will Maduro use this moment to carry out his longstanding threat to jail Guaido once and for all? If he does, how will the U.S., the de facto leader of an international coalition backing Guaido as Venezuela’s legitimate leader, respond?

The whole episode was so bizarre -- with Guaido seemingly lacking the military might to have any chance at all -- that it was hard to understand the day’s events. One explanation, as related by National Security Adviser John Bolton, was that a deal had been struck behind the scenes and that key members of Maduro’s regime had agreed to flip, paving the way for Guaido to easily assume power.

Secretary of State Mike Pompeo claimed on CNN that Maduro had in fact been heading to Havana Tuesday, when his allies in the Russian government talked him out of leaving. Bolton called out Venezuela’s defense minister and chief justice on Twitter, saying this was their last chance to accept Guaido and escape sanctions or “go down with the ship.” Senator Marco Rubio, a Florida Republican who has played a key role in shaping U.S. policy on Venezuela, tweeted that high-ranking Venezuelan officials who publicly support Maduro had “been working to get him out” and that their double cross would soon be exposed.

Defense Minister Vladimir Padrino Lopez, one of those officials, took to the airwaves to declare the people involved in the attempted takeover “ridiculous,” calling what had happened “a mediocre coup.”

Bolton insisted that it wasn’t a coup d’etat because Maduro had stolen last year’s election; Guaido, as the head of the national assembly, is the constitutionally mandated interim president. He said “Cuban thugs” were threatening members of the Venezuelan military who might otherwise defect. President Donald Trump threatened a “full and complete” embargo of Cuba.

Tuesday’s events -- coming a day before planned nationwide anti-government demonstrations -- began with the escape of Lopez, a former mayor of a Caracas district who in 2015 was sentenced to almost 14 years in prison on charges including inciting violence. He was released to house arrest in July 2017 under orders to keep quiet, and his sudden appearance with Guaido was a dramatic turn.

The sun was coming up as Guaido announced the “final phase” of the effort to end Maduro’s disastrous rule, which has driven the once-wealthy oil power into chaos and near starvation.

“This is the morning for all us to go out to the streets, civilians and soldiers,” Lopez said as he stood with Guaido near a military airbase in eastern Caracas. He said he had been freed by his captors. “Today, we are convinced this process is irreversible.”

For more than 10 hours, Caracas and dozens of other cities rang with the boom of tear gas as government troops quelled protests. National police and guardsmen using armored vehicles blocked main arteries and turned back crowds. Supporters of Maduro asked for residents to rally outside Miraflores, the presidential palace, in a show of strength, and hundreds did.

“The opposition called for a civic-military uprising but failed on both ends. Parties didn’t manage to rally and coordinate enough protesters nor did they convince a significant enough factions of the military to break ranks,” said Dimitris Pantoulas, a political analyst in Caracas. “Everything was hurried.”

There was throughout the day a chimerical quality to the opposition endeavor, not unlike Guaido’s January announcement that he was taking the reins of government. He has named ambassadors and officials and been recognized by more than 50 nations. Without the power of the military, his presidency has been an act purely of symbolism.


There’s no doubt that across the country, and within its governing bureaucracy, there is profound discontent with Maduro and broad support for a transition. Guaido and his advisers believed that by declaring an uprising they might actually be able to create one.
For a while, it seemed possible. As protesters threw rocks and Molotov cocktails, dozens of exiled military officers stood at the ready in the Colombian border city of Cucuta. But they didn’t cross the bridge into Venezuela, ordered back to their hotels by Guaido’s local representatives, according to Jose Nieto, a former sergeant major in the National Guard.
In the afternoon, Lopez, along with his wife and one of their daughters, entered the Chilean ambassadorial residence, according to that country’s foreign minister, Roberto Ampuero. Lopez later left the residence and went to the Spanish embassy, the Chilean government said.
At the State Department in Washington, Elliott Abrams, the U.S. special envoy for Venezuela, said he wouldn’t “make predictions about what’s going to happen right now or tomorrow or the day after.” Guaido’s Operation Liberty, he added, “was not done out of the blue. It was done as part of a long process of trying to restore the constitution.”
Guaido said on Twitter that the opposition was “in a process that is unstoppable.” As the streets emptied, he seemed to have been proven wrong, but there was still hope.
“Either we continue to come out and protest, or we resign ourselves to the way things are for another 20 years or longer,” said Alejandro Coiman, a 25-year-old student, as he walked across eerily quiet eastern Caracas. “The match has been struck. There’s no turning back.”

Venezuelan opposition figure Leopoldo Lopez has sought refuge in Chile’s embassy in Caracas, while at least 25 pro-Juan Guaido troops asked Brazil for refuge. The news all but points to the failure of the US-backed coup attempt.

Marekani lazima imchomoe
You must log in or register to reply here.