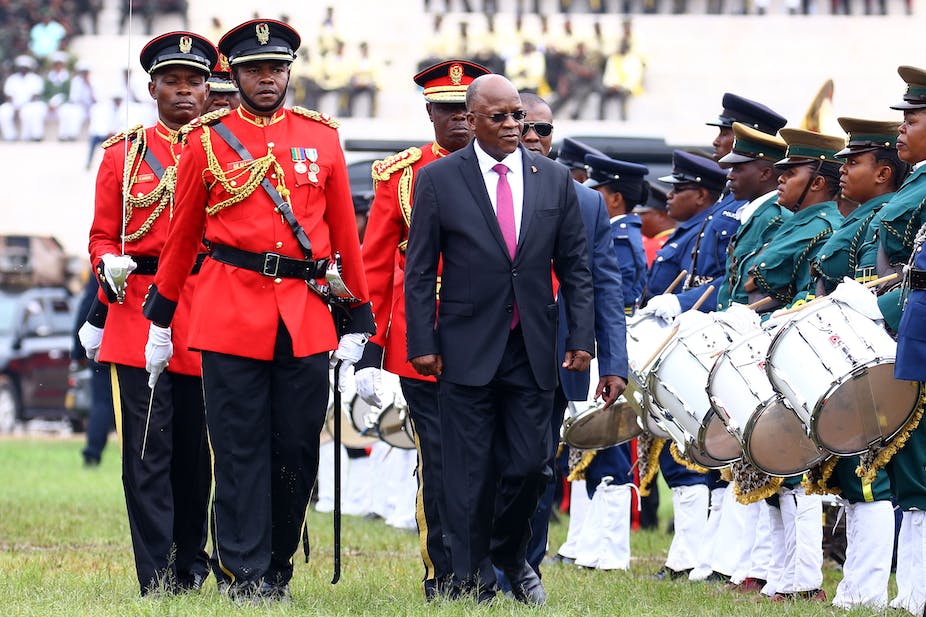 Tanzanian President John Magufuli attends a ceremony marking the country’s 58th independence anniversary in 2019. Stringer/AFP via GettyImages, One of the main points of discussion around the various responses to the COVID-19 pandemic is governance. Different countries have reacted to the pandemic in different ways. These differences are informed by varying styles of leadership and governance around the globe.

Countries with open and transparent governing styles have taken a more hands-on approach by engaging diverse stakeholders. Scholars who examined the COVID-19 responses in China, Japan and South Korea, for example, found that there was systematic evidence that different governance decisions led to different results.

In the case of Tanzania, I argue that COVID-19 has revealed, rather than informed, the governance style under the current administration.

tackling a social calamity is not like fighting a war, which works best when a leader can use top-down power to order everyone to do what the leader wants — with no need for consultation.
Click to expand...

In line with this thinking, being transparent and engaging diverse groups, including both loyalists and critics, is crucial for governments in the fight against the virus.

In Tanzania, President John Magufuli has taken the opposite view. He has framed COVID-19 as a war and not a health calamity requiring scientific consultation. As a result the handling of the pandemic has been at the whim of the president.

Since Magufuli expressed his doubts on the professionalism of the national laboratory, no more updates on COVID-19 have been made. It’s no longer easy to tell if data being released by the government is grounded in science, or whether it is simply that the president wants lower figures reported.

Magufuli’s COVID-19 response is typical. He is a president who has always taken an idiosyncratic view of leadership. Since his election in 2015, he has acted unilaterally. This has divided the country, while consolidating power in the presidency. Even his own ruling party has become a casualty of his autocratic style of leadership.

Idiosyncratic response to COVID-19
Magufuli has downplayed the pandemic’s threat and encouraged the use of local and home remediessuch as drinking ginger and lemon tea, and steam therapy as a way to prevent infection.

He publicly questioned the efficacyof the COVID-19 tests used in Tanzania’s laboratories. He then promised to send a plane to collect Madagascar’s traditional remedy for the virus.

This statement marked the end of the health minister’s daily updates on the country’s COVID-19 response. It was followed by a presidential proclamation that that God was answering the prayers of Tanzanians against the pandemic.
The president then appointed a new deputy health minister, probably because the previous one had questioned the use of steaming therapy to manage the virus.

Two weeks earlier, the president had appointed a new Constitutional and Legal Affairs minister, following the sudden death of his predecessor. The new minister was given the unusual task of investigating the activities of the national laboratoryand its handling of COVID-19 testing.

Both men had previously supportedMagufuli’s response to the pandemic.
These appointments give the real impression that loyalty to the president is very important in Tanzania. Dissenters are not tolerated. It’s no surprise that the official leader of opposition in parliament was rebuffed when he extended an offer to work with the government to fight the virus.

Civil society organisations have also been sidelined. But faith-based organisations have been won over by the government’s decision to keep places of worship open. Religion has been framed as a more appropriate response to COVID-19 than science.

History of intransigence and excesses
In 2017, Magufuli banned pregnant school girls from continuing schooldespite calls to the contrary. As a result the World Bank delayed the release of a $500 million education loan.

Eventually, Magufuli bowed to the pressure and lifted the ban.

Another example of Magufuli’s intransigence was his reaction to a planned countrywide protestorganised by the opposition Chadema party. The policethreatened to use force to stop citizens from participating. Eventually, the opposition called off the demonstration after faith leaders and civil society called for dialogue.

To date, there has not been any dialogue between the government and Chadema.

The absence of dialogue, and discrimination against Chadema and other opposition parties, has led to further polarisation between the Magufuli administration and dissenters.

The state response to COVID-19 is well within Magufuli’s playbook. He acts unilaterally, while polarising the nation and consolidating power in the presidency. This is often to the detriment of the Chama cha Mapinduzi ruling party. Power is centralised in the executive. Party organs and members do not have the agency to hold the president to account.
Critics within the ruling party have been punished and expelled.

The executive’s autocracy has forced the opposition party to strengthen its institutions from the ground up. It now appears that Chadema is becoming a stronger partyinstitutionally. In response, the ruling party has resorted to using force to maintain its grip on power.

The office is responsible for administering education, health, and development projects within local districts across the country.

Thus, local government matters are reported directly to the president’s office and are managed from the very core of the executive branch. This structural change has diverted revenue collection to the central government. The president has also used local government political appointees to silence dissenters.

It is apparent, therefore, that he will decide whether cases of COVID-19 in Tanzania have declined or increased, no matter what the science says.

The real fate of the country, however, is in the hands of Tanzanians. Only they can take their power back.

Copyright © 2010–2020The Conversation Africa, Inc.
You must log in or register to reply here.