· Shares in partner BG close up 5% despite doubts 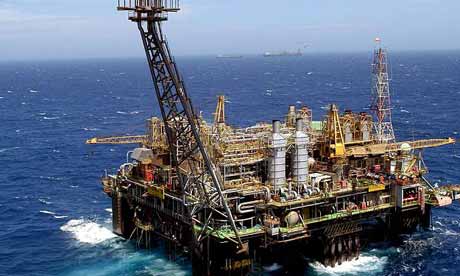 Excitement about the potential of Brazil as a massive new source of oil and gas intensified yesterday after a senior energy ministry official declared that the newly found Carioca field could have 33bn barrels in place.

The comments by Haroldo Lima, head of Brazil's National Petroleum Agency, that the country was harbouring an oil find that vied with the largest in Saudi Arabia and Kuwait, sent the price of shares in BG, the UK exploration company, up 5% and helped lift the wider London market. The news of the discovery also contradicts pronouncements that growth in world oil production may have peaked.

Lima told an industry conference that Petrobras, the national oil company partnered by BG, "may have discovered a huge petroleum field that could contain reserves as large as 33bn barrels, amounting to the world's third largest reservoir".

Amid expressions of surprise and scepticism from industry experts, Lima's agency later issued a statement saying his comments were based on a recent report in a world oil magazine. Other ministers said it was better to wait for official estimates from Petrobras itself.

Industry analysts said it was possible Lima was adding together the reserves of nearby fields in the wider Carioca area off Rio de Janeiro and the figures underlined that Brazil had recently been accepted as one of the great new oil and gas "plays".

Dieter Helm, professor of energy policy at Oxford University and a British government energy adviser, said: "It does not surprise me that these kinds of numbers [33bn barrels] are out there. Whether it is attributed to Carioca itself or elsewhere it should not distract from the point that there is plenty of oil around."

BG declined to comment but sources close to the business - formerly a part of state-owned British Gas - said it was too early to make estimates of how much oil or gas was contained within the Carioca reservoir. "More evaluation [by drilling] is needed," said one well-informed source.

Matthew Shaw, Latin American energy analyst with Edinburgh-based oil consultant Wood Mackenzie, said: "I don't know how he calculates that. It [the 33bn barrels number] is not credible. This is an unfortunate slip of the tongue by a senior member of the NPA. It is likely to be a fairly modest discovery with a few hundred million barrels in place."

Shaw said the unfortunate comments were symptomatic of the "oil fever" that was sweeping Brazil in the aftermath of recent - and confirmed - world-class discoveries such as Tupi, another field where BG has a stake and which has got between five and eight billion recoverable reserves.

Those figures are 10 to 16 times bigger than BG's Buzzard discovery in the North Sea which led to new optimism about the UK's own offshore potential and helped revive drilling interest in the area at a time when local crude prices have been hitting new highs.

Paradoxically, Brazil is at the centre of the biofuels revolution because the government encouraged motorists there to switch to crop-based fuels such as ethanol before anyone else - at a time when the country was trying to cut its oil import bills because it had no indigenous supplies.

While Brazil now exports corn-based ethanol, the country is beginning to believe that it could become one of the world's great future crude oil exporters and might in future join the Opec oil cartel.

Petrobras has just spent more than $8bn (£4bn) signing up new rigs to explore in the very deep waters off Brazil.

While the potential of the latest find in Brazil could add significant supplies to a global oil market that has seen prices reach record levels on the basis that supplies are very tight, it would take the best part of a decade before Carioca is ready for production.

The field would first need to be appraised with extra drilling. Then, production platforms would need to be designed and built before output could begin. Petrobras, BG and their Spanish partner, Repsol, have in the past said that Carioca was smaller than Tupi.

BG has increasingly targeted Brazil as an important area, having bought a 51% stake in the downstream gas distribution business, Comgas. It has an estimated 8,000 square kilometres of offshore acreage to explore in Brazil and holds a 25% stake in the Tupi find and a 30% holding in Carioca. Brazil has traditionally been overlooked as an energy provider because other Latin American producers such as Venezuela and Mexico are much more significant.

Peak oil theory
Peak oil theorists believe the price of crude will forever rise as oil firms try to find increasingly scarce supplies at a time when the fast-industrialisation of China and India is boosting demand.

After yesterday's report showing Russian output stagnating, the normally cheaper Brent blend reached record levels of £56 a barrel. However, fears of a sharp slide in Russian production look misplaced, says Capital Economics, in London. And there is huge cause for optimism over Brazilian supplies. The UK energy adviser Dieter Helm says the world is not running out of oil; much exists under the now melting ice caps. "Finding oil isn't the issue - it's whether we want to find it, burn it and [as global warming increases] all fry," he said.
You must log in or register to reply here.