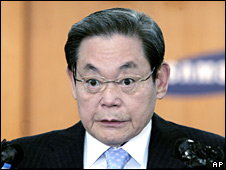 Samsung Group and Mr Lee have denied any wrongdoing

The chairman of South Korean firm Samsung, Lee Kun-hee, has quit less than a week after he was charged with tax evasion and breach of trust.

But the probe cleared the firm of allegations by a former executive that it used a multi-million dollar slush fund to bribe prosecutors and judges.

There is no indication of who might replace Mr Lee.

The Samsung head made his announcement at a nationally televised press conference.

"I have decided to resign from the post of chairman," he said.

"We, including myself, have caused troubles to the nation with the special probe," he continued.

"I deeply apologise for that, and I'll take full responsibility for everything, both legally and morally."

Prosecutors indicted Mr Lee last Thursday but did not formally arrest the 66-year-old, one of South Korea's richest men, saying he would remain free pending his trial.

They defended the decision not to detain him saying such a course of action would "cause enormous disruption" to Samsung's business and have "negative repercussions" for South Korea at a challenging time for the economy.

In a strongly-worded statement, prosecutors said Samsung had a lot of "structural problems", including "illicit transfer of management control".

This related to allegations that Mr Lee and other executives sought to use illegal accounting techniques to covertly transfer control of the business to his son.

Although denying any wrongdoing, Mr Lee said during his interrogation that he assumed responsibility for the problems at the firm and might even consider stepping down.

Samsung apologised for the damage the affair had done to its reputation and promised it would "reform" its practices in the future.

"Taking this investigation as a new starting point, Samsung is preparing reform plans based on advice from various sectors of our society," it said after the charges were announced.

Son of the founder of Samsung, Mr Lee took over as head of the business in 1987, and it has since grown to become the world's largest producer of memory chips.

The corruption case has been keenly followed in South Korea where Samsung remains one of the country's most powerful and respected organisations despite growing concerns about the alleged behaviour of its leaders.

Samsung is best-known for its electronics unit, but it is also one of the world's largest shipbuilders.

© BBC MMVIII
You must log in or register to reply here.