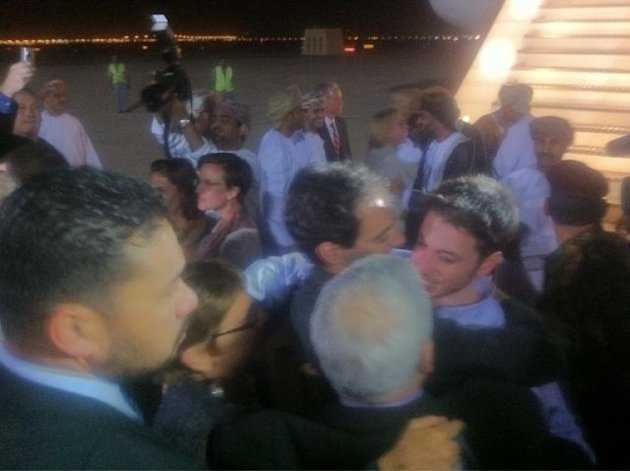 Two American hikers imprisoned in Iran for more than two years arrived in Oman late Wednesday, and were greeted by their ecstatic, waiting families.
President Obama welcomed the release of Shane Bauer and Josh Fattal, and thanked Omani, Iraqi and Swiss leaders for their help in securing the men's freedom.
"I welcome the release of Shane Bauer and Josh Fattal from detention in Iran and am very pleased that they are being reunited with their loved ones," Obama said in a statement released to journalists Wednesday. "The tireless advocacy of their families over these two years has won my admiration, and is now coming to an end with Josh and Shane back in their arms. All Americans join their families and friends in celebrating their long-awaited return home."
"We are deeply grateful to His Majesty Sultan Qaboos bin Said of Oman, Iraqi President Jalal Talabani, the Swiss government, and to all our partners and allies around the world who have worked steadfastly over the past two years to secure the release of Shane and Josh," Obama's statement continued.
Bauer and Fattal, both 29, were turned over to Swiss and Omani diplomats earlier Wednesday outside Tehran's Evin prison, following processing of their bail payment of $1 million, presumably paid by Oman.
A Tehran court last month convicted both men of espionage and sentenced them to eight years prison. The two men, along with their friend Sarah Shourd, were detained by Iranian authorities in July 2009 while hiking in Kurdish, northern Iraq. Their families and American officials have insisted the three University of California at Berkeley graduates are innocent and have implored Iran to release them on humanitarian grounds.
Their release comes as Iranian President Mahmoud Ahmadinejad is in New York ahead of his address to the UN General Assembly on Thursday.
YAHOO
You must log in or register to reply here.